The Ultimate Breakfast Sandwich with eggs, pastrami, tomato sauce, and everything that's yum! 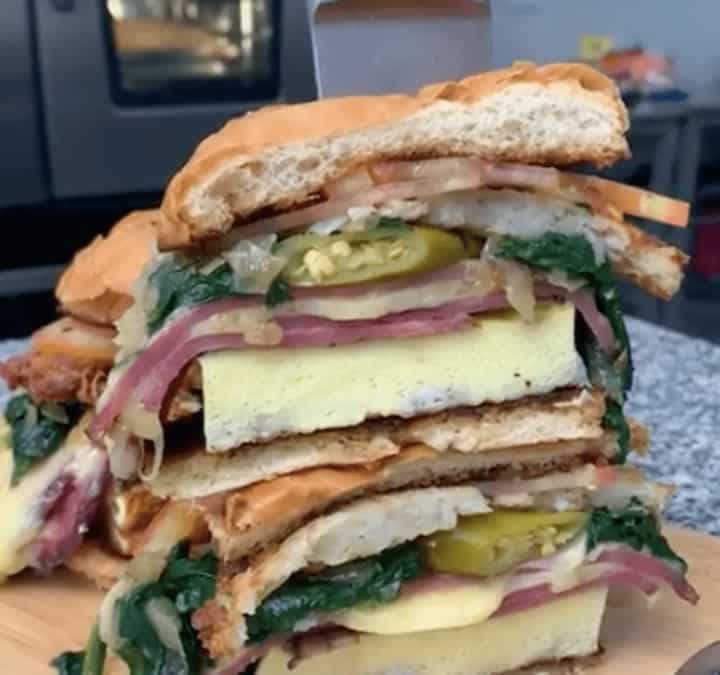 Therefore, you would not need to consume any additional food.

Breakfast fuels the body and gets you ready to face the day ahead. Therefore, this recipe presents you with The BEST-EVER Breakfast Sandwich with Crispy Eggs & Cheese. This is it, folks, there is no better choice. With so many flavors packed into one sandwich, it combines the simplest ingredients and comes together in about 20 minutes. Mornings will become your favorite time of the day when you try it.

The Origin of Sandwiches

Sandwiches are now ubiquitous, but their popularity wasn't always so prominent. Sandwiches were first invented in England in 1762, according to history. Most food historians believe that the sandwich was created by John Montagu, "the 4th Earl of Sandwich." Montagu was notorious for being a problem gambler, spending hours upon hours playing cards. In the middle of one of his long days playing, he worked up an appetite and asked the kitchen for food he could eat with his hands without getting up. A sandwich was served to him-two with pieces of bread with meat in the middle. Ever since sandwiches have become a staple food in England. They were well established by the Revolutionary War.

A substantial amount of time passed before the sandwich reached America. Because Americans are slower to adopt trends happening on the other side of the pond, it could be the cause. An American cookbook included the first sandwich in 1815. It was not the typical sandwich that’s being eaten everyday, but a tongue sandwich. •    Cover with a metal bowl to create steam and melt the cheese.

•    Squish all the water from the potatoes, and add the flour and salt. Mix well.

•    Make little balls and press them into a hot griddle with butter.

•    Sear on both sides and reserve warm.

•    On a hot griddle, add the sliced onions and a pinch of salt.

•    Crack all six eggs into a bowl, add salt, pepper, heavy cream, and sliced mushrooms and fold gently until combined.

•    The mixture should be poured into the greased pan and baked for 15 minutes until the eggs are just set.

•    Transfer the potato rolls to a cutting board and cut them into squares of the same size.

Snails On Your Plate: Try This Protein-loaded Dish From Bengal

Fancy Protein Loaded Salad For Your Lunch? Step This Way