This Colourful Sikkim Thali Is Making Us Drool

This Sikkim thali combines three types of cuisines, and is a wholesome complete meal we can’t wait to try. In India, we are all familiar with the notion of thalis. How many dishes and snacks are served on a single platter that looks so colourful and appetizing.  There are numerous different types of thalis in India, including South Indian thalis, Maharashtrian thalis, Punjabi thalis, Bengali thalis, and so on. Every state in India has its own thali, and each one is as delicious.

However, not everyone is aware of another thali known as the 'Sikkim Thali.' The 'Gurkha Thali,' as it is often known, is unique in that it combines three different types of cuisines. Interesting. Isn't that so?

Sikkim is a state in northern India, bordered by Bhutan, Tibet, and Nepal. Sikkim thali, also known as Gurkha thali, is one of the state's most popular dishes. Almost everyone likes it, and it is frequently referred to as a comfort food. It is reported that all organic ingredients are used in the preparation of the thali's meals.  The meals are reported to be influenced by Nepalese, Bhutanese, and Tibetan cuisines.

When people think about Sikkim food, they usually think of steamed momos, thukpas, and soups.  But we've discovered a hidden gem called 'Gurkha thali,' and we can't get enough of how lovely and colourful it is. Rice, dal, gundruk (a leafy green vegetable from Nepal), kinema (fermented and preserved beans), churpi ningro (wild edible ferns), and crispy papads are all included in this thali. For these thalis, chicken curries with steamed rice and sel rotis are occasionally cooked. 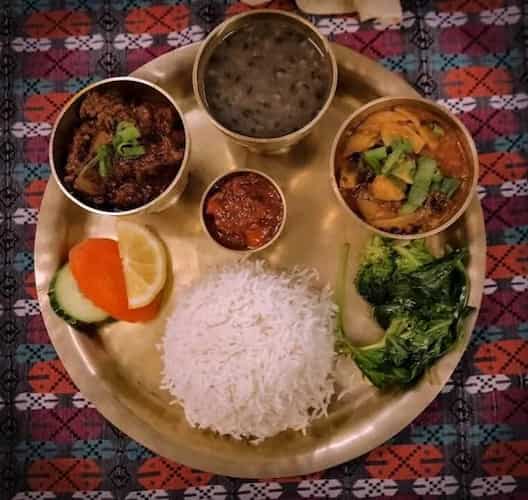 This thali is frequently accompanied by a traditional liquor known as 'Tongba.' This is a millet-based alcoholic beverage made in Nepal, Darjeeling, and Sikkim's mountainous regions. It is one of their most well-known and well-liked beverages.

Let's have a look at what it entails:

It's a green leafy vegetable native to Nepal that's fermented before being consumed. It is frequently served as a side dish in this thali. It provides a unique dimension to the thali. The Gundruk is also made using radishes and cauliflower.

It's a fermented bean that's native to Nepal, Bhutan, and Sikkim. They're frequently served as a soup or as a side dish. This is a protein-rich dish that is regarded to be highly healthful.

It is stated that without a sel roti, a Gurkha thali is incomplete. It is a ring-shaped bread that is traditionally served at festivals such as Dussehra and Diwali. Rice, flour, butter, cardamom, cloves, and water are used to make it, which is then deep fried in hot oil or ghee.

The people of Sikkim enjoy an alcoholic beverage made from millet. It is extensively relished and adored by the locals, as it is fermented.

For their meals and snacks, Sikkimese people use exclusively locally grown ingredients and frequently use fermentation and preservation methods to cook them.  They eat this thali primarily during celebrations such as Durga Puja, Diwali, and other big festivals. Though preparing these Sikkim thalis takes a long time and requires extensive preparations, locals choose to eat them exclusively during festivals. However, you can always go to Sikkim and have this thali from any restaurant there. It's commonly available in all of the restaurants.

Your Guide To The Best Places For Thali In Delhi

Your Guide To Authentic Assamese Thali Places In Guwahati