These Onam Sadyas Have A Philosophical Message

The ‘Onam sadya’ evokes images of lavish spreads served on a banana leaf. But in Kerala, simpler versions have a significance of their own Across Kerala, there are large-scale Onam feasts that have acquired a legendary status, and deservedly so. Among them is the sadya served on Uthradom (penultimate day) and Thiruvonam (final days) at the Vamana Moorthy Temple in Thrikkakara, Ernakulam. The feast is served to all pilgrims who visit the temple on these two days — a practice that grew out of a custom of serving meals to temple staff, elephant mahouts and so on. Crowds of up to 20,000 routinely partook of the Onam sadya in the pre-pandemic years.

The Thrikkakara temple feasts begin on Uthradom: the very first to be served are the temple elephants. An afternoon meal is then dished up for devotees. On Thiruvonam, the sadya begins from 10 am itself. The banana leaf set before the diners includes “parippu, poppadom, salt, sambar, erissery, kalan, avial, olan, pachadi, kichadi, pickles, ginger curry and palada pradhaman”. Rasam and injithairu (ginger in curd) round off the menu. 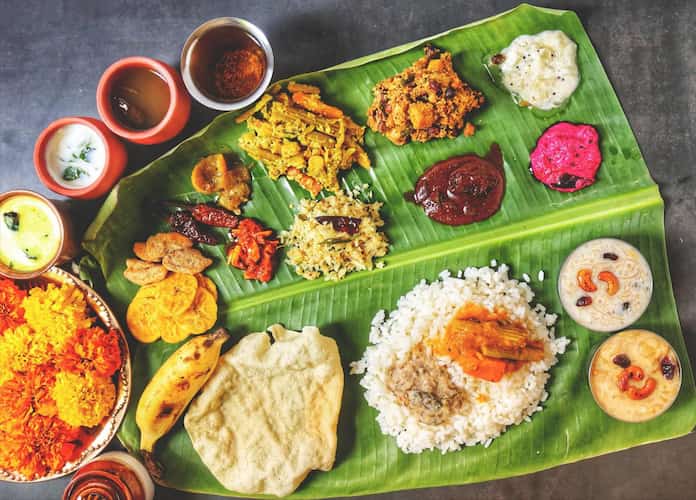 Other temples, such as Guruvayoor and Sabarimala also offer special Onam treats, although the Aranmula Parthasarathy Temple’s feast is unmatched for the sheer variety of dishes (63) that are served, and the pomp and ceremony that accompanies it. The sadya is set for the rowers who compete in the traditional boat races, once they reach the temple banks. They call out the verses of a song and each of the 63 preparations is served in response, including parippu, pulissery, kaalan, avial, thoran, erissery, koottukari, pachadi, kichadi, varieties of mezhukku purattees, thorans and pickles.

Apart from these grand celebrations, however, there are simpler sadyas that nonetheless evoke the true spirit of the festival. One is the sadya served to ants — ‘urumbinulla sadhya’, a custom followed in certain parts of Kerala, stemming from the belief that ants accompanied Mahabali on his annual visit to his kingdom from the netherworld. A portion of rice mixed with grated coconut and jaggery is placed on a small banana leaf. Four of these servings are set down in four corners of one’s home, on the evening of Thiruvonam.

Ants (and the elephants at Thrikkakara) are not the only ones who are treated as privileged guests at Onam feasts. Kollam’s Shri Dharma Sastha temple, Sri Kallely Oorali Appooppan Kavu in Konni, and Edailakkadu in Kasargod district are places where monkeys are served Onam sadya.

These rituals reiterate that all living beings are one, and created equal, and that the Onam sadya is truly meant for all.

What Makes Onam Sadya So Special? All You Need To Know