The Origin Story Of The Famous Bread Pudding

Bread pudding is a traditional dish with humble origins. It arose out of need, as a way of utilising leftover, stale bread during a time when food was limited Bread puddings with custard and chocolate flecks have gone a long way since the dessert's humble beginnings.

Bread pudding is a traditional dish with humble origins. It arose out of need, as a way of utilising leftover, stale bread during a time when food was limited. If the last heel of bread in the house was too hard to eat, you could always soften it with a little warm liquid and sugar.

What Exactly Is Bread Pudding?

The choices for bread pudding are infinite, and numerous countries have put their own distinct and individual spin on this treat over the years. The main structure of the pudding, however, consists of placing chopped or torn bread in a dish, pouring a custard sauce over the layers, and baking it in the oven.

While bread is always at the heart of this dish, the original recipe was not as opulent as the custardy confection we now make. Frugal cooks in 11th and 12th century England, where it originated, could only afford to soak the bread in boiling water before pressing it dry and adding whatever sugar and spices they had on hand. After the 13th century, when the recipe began to add eggs, milk, and a form of fat to soak the bread in, the delicacy became known as 'bread and butter pudding' rather than 'poor man's pudding,' eventually being shortened even further to just 'bread pudding.' If you're wondering why it's called a pudding, it's because this dish has a cereal basis (the bread) and bakes up soft and spongy. 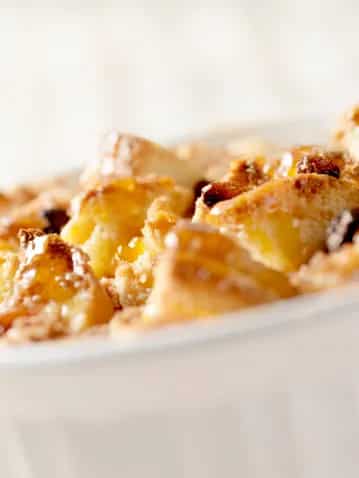 Bread pudding dates back to the early 11th and 12th centuries in Europe, and it has been popular in England since the 13th century when nearly every home had a deep bowl called a pudding bowl that was used to gather pieces of stale bread. Bread pudding back then was not quite as opulent as it is today. Stale bread was frequently soaked in boiling water and pressed dry before being blended with sugar and spices, rather than the custardy mix of cream and eggs. Pudding was brought to America by early settlers, but because wheat was scarce, they often thickened the mixture with cornmeal instead of bread.

Bread pudding is popular in many different nations. Capirotada, a bread pudding piled with cheese and soaked in a syrup prepared with piloncillo, a type of brown sugar, is popular in Mexico. Om Ali is an Egyptian pudding composed of puff pastry, milk or cream, raisins, and almonds. Eish es Serny is a Middle Eastern dessert prepared from dry bread (rusks) that has been cooked in sugar and honey syrup, scented with rosewater, and tinted with caramel. In India, there's shahi tukda, a bread-based meal with ghee, saffron, sugar, rosewater, and almonds.

Since the days of the pudding bowl, bread pudding has gone a long way. It is now frequently cooked using fresh artisanal bread, such as brioche, challah, pannetone, and even croissants, which deviates significantly from the dish's austere origins. New Orleans-style bread pudding is frequently topped with pecans, walnuts, or raisins and served with a sweet sauce laced with bourbon and a scoop of vanilla ice cream.

Portia Little, a cookbook author, finds bread pudding to be the greatest comfort dish. Little's extensive collection of bread pudding recipes demonstrates how versatile this dish is. Little loves bread pudding because of the variety of ways it may be prepared.

The Journey Of The Indian Bread Pudding-Shahi Tukda

How To Make Bread Pudding: 4 Tips And Tricks You Must Remember

Bread Pudding: Treat Those Sweet Tooth Desire With This Recipe