The many versions of Pathrade

Arbi leaves (colocasia leaves) form the base of a dish that has many variations across the country. We explore this dish most of us are familiar with. I grew up in the Gulf and summer vacations were when we would come to our hometown of Mangalore. What was blazing summers in the Gulf, would be the torrential rainy season here. Since these were once in a year visits for just two months, there was always an overdose of great home-cooked food. And because the rainy season brought with it a seasonal special – colocasia leaves, pathrade was always on the menu.

For a long time, I thought pathrade was a Mangalorean speciality not made anywhere else, until I went to live in a hostel and met people from all over India. When room and hostel-mates came back from visits home, invariably a version of pathrade would arrive – the Mangalorean Catholic style was my contribution. Here, colocasia leaves are shredded and then mixed into a thick, spiced ground rice batter. This mix is patted onto screwpine leaves in a block shape around two inches thick. This is then tied firmly with string and steamed till it becomes a firm block. The block is then sliced and the slices can be pan-fried with a coating of spicy masala or can be dropped into coconut-based meat curries (usually mutton), and eaten as a one-pot meal.

A Konkani version is documented in the Jyotsna Shahane’s book The Classic Konkani Cookbook, where Shahane has drawn inspiration from the 1952 book by Narayani Nayak called Cookery Craft. Here, a mix of soaked toor dal ground with dry red chillies, coconut, and asafetida are applied directly onto colocasia leaves in layers of leaves and masala. These layered leaves are then rolled and tied tightly into bundles and steamed. Once ready, they are sliced and served as is or sometimes with a tempering of mustard seeds and chilli powder. This version is called Patravade or Patrado.

In the hostel, I was introduced to the Gujarati Patra. Here gram flour is made into a batter with red chilli powder, turmeric, some ginger paste, jaggery, tamarind, and salt. The thick central vein of the colocasia leaf is removed (as is done in the Konkani version) and the batter is applied to the leaves. The same method of layering leaves with batter is used and it is then rolled, tied and steamed. Once cooked, it is sliced and given a tempering of sesame, mustard, and cumin seeds with some curry leaves. It is usually served as a snack. 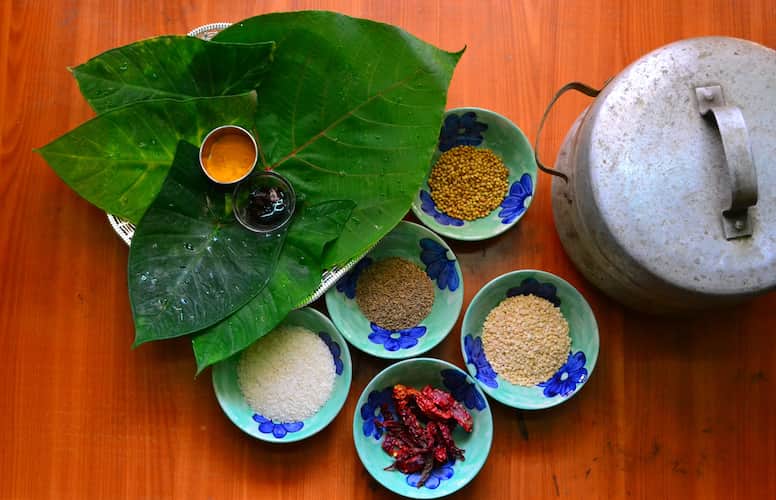 A version of the Gujarati Patra is the Parsi Patrel. A significant number of Parsi live in Gujarat and have absorbed some of the state’s culinary heritage into their own cuisine. Anahita Dhondy, Chef and Author, Delhi, says that while the making of Patrel is similar to the Gujarati version, the way Parsis serve it is quite unique. “It is made with chickpea flour, spices and lemon and is then steamed. To serve, we slice it into roundels and saute it and on the plate squeeze some lemon juice and masala. It is a snack that is usually served with drinks”.

Anubhuti Krishna, a passionate food and travel writer talks about the Pataude of Uttar Pradesh quite fondly. “Arbi leaves are cleaned, spread out and smeared with a paste of chickpea flour (besan), ginger-garlic, a basic seasoning and caraway (ajwain). The leaves are then rolled and cut. The roundels can then be steamed and stir-fried with more masala. Many people choose to deep fry it as well”, she says adding that it is usually eaten as a snack with chai in the evenings and is even served with dal-chawal. Maharashtra too has versions of the pathrade which go by the name alu vadi(s). Interestingly ‘alu’ means colocasia and ‘vadi’ means a square or a piece of flat cake of sorts. Vadi could be sweet or savoury. A coconut fudge is also a vadi, as is the alu vadi!

Saee Koranne-Khandekar, Author and Culinary Consultant, Mumbai, explains how alu leaves are used in two formats in Marathi cooking. “The young, small leaves and stems are used for making Aluchi Paatal Bhaaji or Phatphada, a sort of stew with sliced coconut, peanuts, chana dal, etc. and is made on special occasions. The larger leaves are used for the vadi. The thick veins on the underside are trimmed and the leaf is often flattened with a rolling pin. Then a paste of besan or soaked and ground chana dal mixed with tamarind juice, jaggery, red chilli powder, cumin powder, sometimes but not always garlic paste (because Alu vadi is also made for Naivedya), salt and turmeric is spread on the underside and leaves are stacked up in alternating orientations. The stack is then rolled tightly and steamed. It is then sliced and shallow fried”.

The Pathare Prabhu community in Maharashtra also makes an alu vadi, Saee says, which has baby prawns in the chickpea filling; this version always contains garlic and is quite delicious. All traditional feasts in Maharashtra necessarily contain a fried item, and Alu vadi is quite a favourite across the board. Funnily though, the Alu stew Saee says, is a wedding favourite in some communities while in others, it is made on the 13th-day meal after a death.

Whether it’s the Bihari Patode, the Parsi Patrel, Mangalorean Pathrade, Maharastrian Alu vadi or UP’s Pataude, colocasia leaves form the basis of a delicious creation. While at one point, these leaves were seasonal, appearing only during the monsoons, they are now available throughout the year. The larger leaves tend to be a little itchy for the throat, nevertheless, the treat of having this dish more than makes up for it. In Mangalore, spinach or any other robust greens can be used as a substitute, though the flavour profile changes completely. Maharashtra too uses spinach and also makes coriander vadis.

The method of preparation of this colocasia leaf-based dish remains by and large the same across the country. It’s the batter that is applied to it that has variations to it. Any which way you look at it – patrade/patode/patrel/patravada/pataude/alu vadi all make for an indulgent treat.

(Views expressed in this piece are those of the author, and do not necessarily represent those of Slurrp)

(Ruth Dsouza Prabhu is an independent Bangalore-based journalist with over 20 years of experience, writing for Indian and international publications on niches like food, beverage and travel.)