The Konkan coast's mistress of spices

Two weeks beside a semi-deserted beach on the Konkan coast reveal what its diverse people like: Shivaji, fish, spices and dogs named Ronnie "Look appa, there are three people. What are they doing here?”

I could not see because I don’t wear glasses when I swim. In any case, why would I care what these people were doing on an otherwise deserted beach? Moreover, there were three, not three hundred.

For the record, two of them were on a scooter, the third was lounging under a casuarina tree. But the illusion of proprietorship is easy when you are 10, and used to having the beach to yourself.

It was 3.30 in the afternoon, and under a warm November sun, the daughter and I were swimming in the middle of a shallow bay near my cousin’s hillside home on Maharashtra’s Konkan coast. We first came here about 15 years ago, before she was born, when it really was deserted.

The beach in question has been the anchor of our lives over the last two weeks, our playground and free gym. We walked, ran, lounged and swam—before breakfast, after lunch or before dinner. At no point were there more than 20 people—including the beach cricket team whose sandy field I ran through on my morning run—over its entire 2km length, if you discount the cows and sundry dogs.

The dogs were well known to us, for they were playmates for the shaggy, frisky year-old mutt who accompanied us for walks every evening. We watched him chase the lapwings as they skimmed over the beach, chase his doggy friends or, if they weren’t around, run wild in sheer joy. Ronnie, I thought, was oddly named for a rural dog.

Before I could ask the caretaker of my cousin’s home how he got the name, I met the puppy next door. What was his name, I asked the gardener’s wife. Ronnie, she said brightly. And how did he get that name? Oh, he was named after the dog before him, who died of snakebite. It appeared the locals loved their fish, spices, and naming dogs Ronnie (not necessarily in that order).

My reacquaintance with spices came through my cousin, Gitu or Gitanjali, who took me to her long-time supplier in the nearby village of Nagaon, where I met Amita Baliram Shevde and her husband, Baliram Laxman Shevde.

The Shevdes are a genial couple who run a Konkan-food bazar born out of adversity. Baliram lost jobs twice, once when a textile mill in old Bombay shut and then when a fertiliser factory up the coast closed. The couple began selling hand-pounded spices from a shack outside their home. What began as a means to survive is now a business that attracts the local cognoscenti. “We even courier spices to our customers in the US,” said Amita, a woman with bright, twinkling eyes, a mistress of diverse spices.

Encouraged by Gitu, I loaded my bag with the Shevdes’ prawn pickle, kokum and their signature spices: aagri masala (spicy, for meat); ghati masala (for chicken); fish masala; gharguti masala (home-style, not so spicy, for veggies and meats); goda masala (also not so spicy, for general use); and CKP masala. CKP? I knew the acronym as Chandraseniya Kayastha Prabhu, my mother’s caste. Amita confirmed the masala was meant for the CKP-style of cooking.

I should not have been surprised. My mother is Maharashtrian, from the textile town of Bhiwandi. It was only last week, after reading my last column about shopping for fish in Murud down the coast, that she said, “Oh, that’s where my grandfather came from.”

I hadn’t heard this before, but Gitu confirmed some part of us was indubitably anchored in Murud-Janjira, home to a sea fort, a town where Abyssinian, Maratha, Jewish, Christian and Muslim cultures merged. There are temples—many with lawns and ponds—churches, mosques; the town also had a synagogue. Today, Murud and its sister settlements are middle-class getaways, dotted with modest home-stays and local khanavals (lunch homes) that advertise gharguti jevan (home-style food).

It was at one such khanaval, Suruchi Hotel, in Nagaon—recommended by Amita—that Gitu and I bought spicy prawn curry and fried pomfret and took it home for lunch. We waited as owner and chef Ashwini Bhagat cooked our feast in her modest kitchen. As we headed home, we passed signs for hotels with rain dances, karaoke and villas for sale, advertised with images of happy Caucasian families.

We had come on a working holiday, editing and writing while the child attended online school. On our final day, we took a longer, bumpier road towards home 1,100km away because we hoped for better signal (it lasted for the child’s first class).

With fresh fish and spices available, I could not help but cook. One day, a neighbour sent a 4kg hekru (grouper); we used the Shevdes’ fish masala for it. Another day, I made a basic chicken curry with Amita’s ghati masala.

We overate regularly but those beach exertions were effective remedies. On our final day, as we swam in the bay, I found myself fretting that the beach was especially crowded. I counted 10 people. It is easy to get spoilt in these parts. 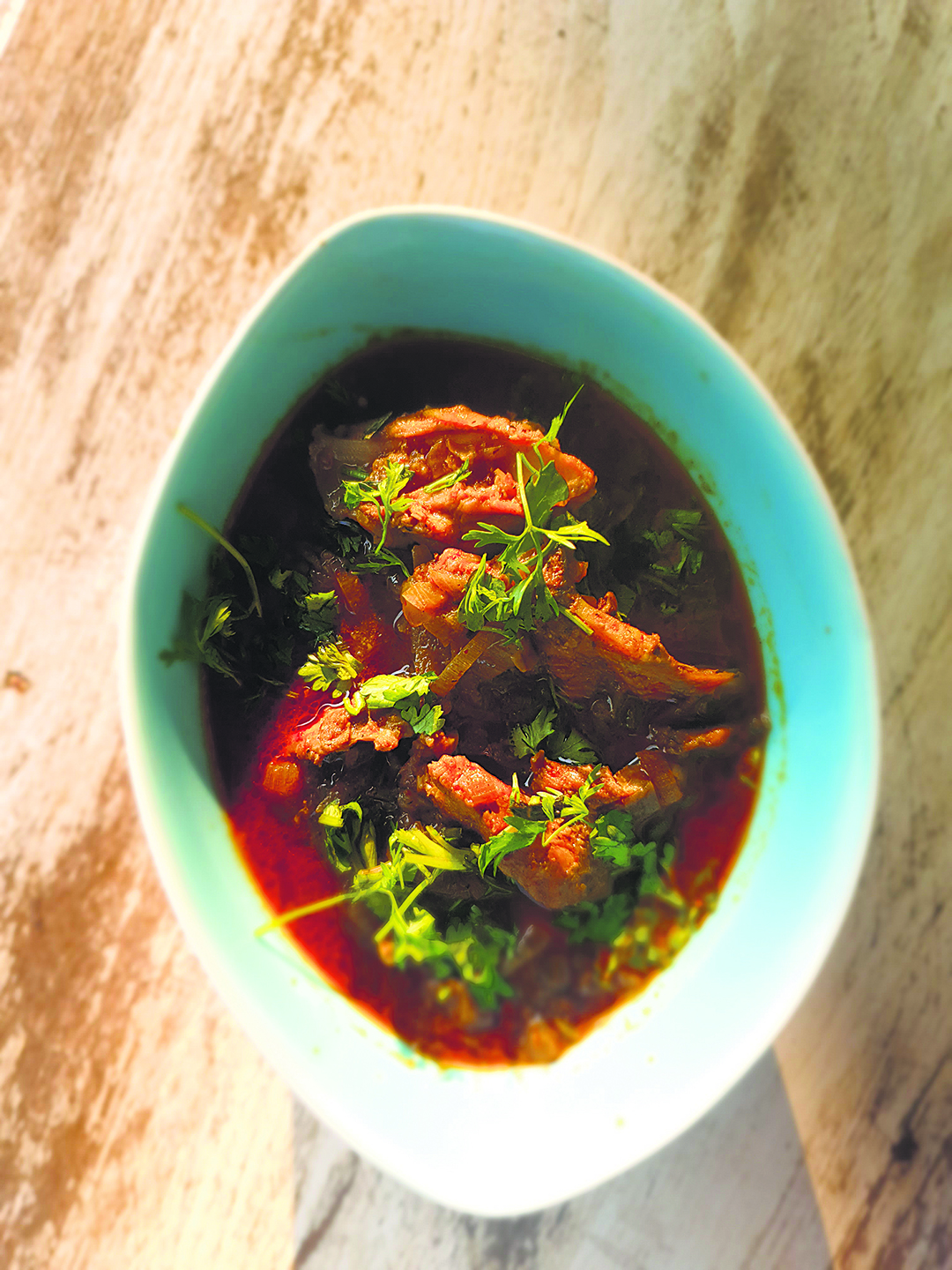 Heat oil in a non-stick wok. Put hing, then onion, and fry till golden brown. Add ginger-garlic paste and sauté for a minute, drizzling in oil. Add the chicken and sauté till it starts to brown. Drizzle in water if needed. Add the ghati masala and salt and keep mixing for three-four minutes. Add enough water to make a gravy, cover, lower heat and cook for an hour. Stir in 1 tbsp coriander, take off heat. Garnish with leftover coriander.

Our Daily Bread is a column on easy, inventive cooking. Samar Halarnkar is the author of The Married Man’s Guide To Creative Cooking—And Other Dubious Adventures.