The Interesting History Of The Popular Scones

Take a look at the origin story of the delicous scones. Scones are a popular afternoon tea item in the United Kingdom, and they often come with the goodness of jam and clotted cream. Scones have a peculiar texture that makes them so tempting. They aren't quite a cake, but neither are they biscuits or pastries. Traditional scones are baked with flour, butter, sugar, and milk, and can give your high-tea a delish upgrade. But where did they come from, and how did they become such a rage?

The Early Days Of Scones

Scones are supposed to have originated in Scotland in the early 1500s, with a Scottish poet making the earliest recorded scone in 1513. However, similar recipes were popular even before they made it to the recipe books.

Scones were first fashioned from oats, which were formed into a huge circle and sliced into four or six wedges. They were then roasted over an open fire, however, modern versions use flour and are prepared in the oven.

Traditional English scones may contain raisins or currants, but they are typically simple, relying on jam, preserves, lemon curd, or honey for flavour, perhaps with a dollop of clotted cream on top. Without butter or jam, fancy scones with dried fruit like cranberries and dates, almonds, orange rind, chocolate morsels, and other flavourings are also popular.

The Rise In Popularity

Scones were an important part of the popular afternoon tea ritual in England from 1840. Anna, the Duchess of Bedford, a close friend of Queen Victoria, popularised this. She asked for 'light fare' one afternoon, which included tea, biscuits, and scones. She allegedly enjoyed it so much that she ordered it every afternoon, giving birth to the English tradition of 'Afternoon Tea.'

The 'proper' method to eat a scone is often debated upon. Does one btite into in straight away, or remove the jam and cream to avoid further mess? While cream tea is popular in both Devon and Cornwall, however the way they eat their scones differs. In Cornwall, jam is spread on top of the warm scone first to allow it to soak in, and then clotted cream is spread on top.

Clotted cream is applied first in Devon to form a barrier between the runny jam and the scone. A scone isn't complete without jam or cream. These items enhance the taste of the scones to the next level. 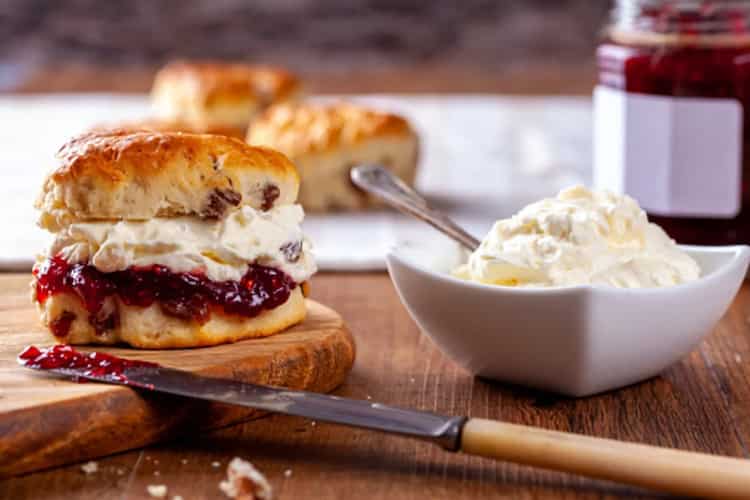 Today, there are more scones recipes available than there are hours in the day to bake them. Buttermilk scones, chocolate scones (including scones with chocolate pieces), treacle scones (with cinnamon, nutmeg, brown sugar, and treacle, or blackstrap molasses), glazed and frosted scones, and savoury scones like cheddar-dill and Parmesan-garlic scones are all available. Scones, which are essentially sweet biscuits are best served for breakfast or brunch, as well as afternoon tea. When heavy cream is substituted for butter and eggs in a standard scone recipe, the result is a soft, light scone that resembles a cream biscuit. A moist scone can be split like a shortcake biscuit and served for dessert with berries and whipped cream.

How To Make Scones: 3 Tips And Tricks To Ace It At Home

Scones-A Sweet Delight People Are Falling In Love With