The History Of The Ice Cream Sandwich; Where To Find Them In Delhi The ice cream sandwich has been the hallmark of American summer for years. The first ice cream sandwich was sold for a penny in New York in 1900. Later, newspapers popularised the sweet treat and it travelled across the Atlantic to Europe and England. It became a welcome change from the ice cream cone by the 70s and also came to be known as an ‘ice cream wafer’ because of how it was made.

However, ice cream sandwiches (especially homemade ones) haven't been produced as much as they were since the 70s. It has been estimated that this was because frozen food was in demand and the ready meal was gaining popularity. Around this time, things began to change in modern Britain. Women started working and had less time to spend at home or in the kitchen. Hence, quick and easy meals were the go-to option.

Not long after, in the 80s, there was a spike in divorce rates and frozen food companies decided to capitalise on this. The 80s in Britain were known for being the decade of the bachelor. Men were on their own, and an abrupt change in lifestyle meant that they had to cook dinner for themselves everyday. And so, frozen food companies aimed their advertising at single men, highlighting the convenience of a pre-cooked meal. Making ice cream sandwiches was considered far from convenient. 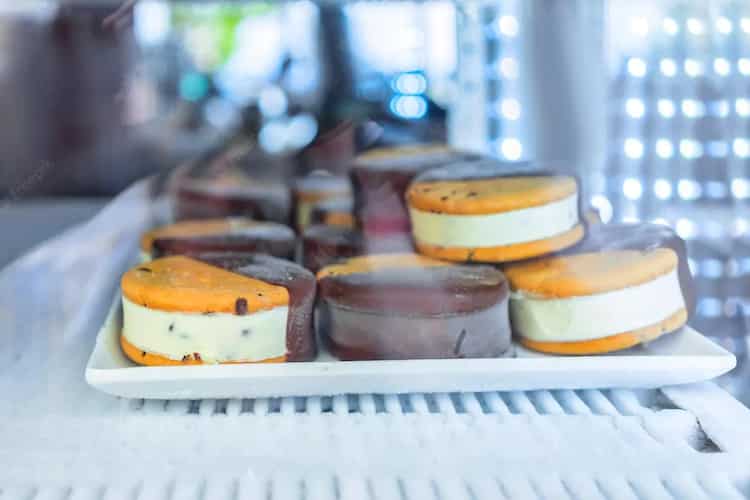 More recently, ice cream sandwiches have become a sort of food trend, equally popular with adults as they are with kids. Restaurants and ice cream shops around the world have taken to preparing the treat for eager customers. Sandwiched between two thin wafers, ice cream in different flavours has become the dessert of choice for many. As the ice cream slowly melts and drips down your hands, the wafers or cookies turn soft. We recommend three places where you can find ice cream sandwiches in Delhi:

A delivery-only ice cream brand, Minus 30 has taken the humble ice cream and turned it into a gourmet dessert. A bit more expensive than most other places, Minus 30’s ice creams also come in vegan and sugar-free varieties. Their ice cream sandwiches are the traditional kind, made with ice cream sandwiched between two thin wafers, and come in flavours like chocolate and hazelnut, and vanilla, toffee and almond.

Mira Kapoor Gorges On Ice Cream Sandwiches; Here’s Where To Find Them In Mumbai