The History Behind Charlotte Russe Cake, 3 Varieties To Try Despite the fact that Charlotte Russe has a long and wonderful history, particularly for holidays and formal occasions, some dessert enthusiasts have never heard of it. So what is a Charlotte Russe, exactly? Charlottes are a sort of chilled dessert made by pouring a mousse into a mould with a flat bottom and a layer of cake strips and ladyfinger (small delicate sponge cakes that resemble fingers, thus the name). A whipped cream mousse made with Bavarian cream gelatin is featured in a Charlotte Russe dessert. Baked fruit Charlottes and tiny buttered bread pieces are also available.

The Charlotte Russe Cake is said to have been created by French chef Marie Antoine Careme (1784-1833), who named it after Czar Alexander I, his Russian employer. In French, the word ‘russe’ means ‘Russian’. According to some historians, the name Charlotte refers to Czar Alexander’s sister-in-law, Queen Charlotte, Princess Charlotte of Mecklenburg-Strelitz (1744-1818), who married George III, King of Great Britain and Scotland.

This sweet delicacy has evolved over time to include many various versions, such as the exquisite Charlotte Malakoff, which is filled with kirsch-flavoured almond cream and topped with chantilly cream and berries. The so-called Charlotte Royale, which has the same filling as Charlotte Russe but replaces the ladyfinger lining with Swiss roll slices, is another popular alternative to the Russe variant. Charlotte russe is a lovely and delicious delicacy that is commonly covered with jelly and adorned with various fruits.

Over the years, Charlotte Russe’s streamlined versions have had their moments. Individual Charlotte Russe cookies, for example, were a popular delicacy in bakeries, confectionery stores, and luncheonettes in several New York City districts throughout the 1930s, 1940s, and 1950s. On a good day, a square of sponge cake topped with whipped cream and a maraschino cherry, and maybe a sprinkling of chocolate sprinkles, was all that was left of Charlotte Russe. Although these delights don’t seem unpleasant, they may be unfamiliar to those who associate Charlotte Russe with a massive, extravagant cake. Here’re the different varieties of Charlotte Russe. 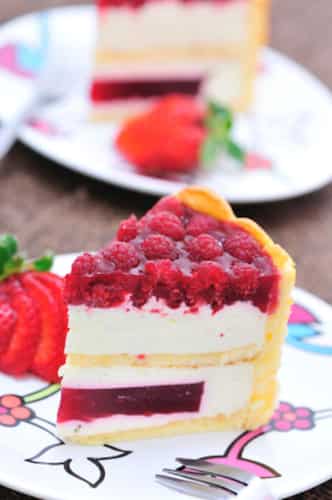 It has a ladyfinger lining and a souffle filling of cream, butter, sugar, liqueur, chopped almonds, and whipped cream in the centre. Strawberries are used to garnish this delicious dessert.

It’s a golden-crusted dish that’s produced by baking a thick apple compote in a buttered bread-lined mould. This dish was originally devised as a means of reusing old or leftover bread.

Homemade Chocolate Cake For All Times, Recipe Inside