32 countries, 32 scrumptious national dishes. This is our quest to find out which one is the ultimate? is it the hamburger or the roast beef or does pickled herring take the cake? With the 2022 FIFA World Cup (and all of its attendant controversies) underway in Qatar, we’re focusing on a subject that enjoys even more of a dedicated fandom than football: food.

A variation of the Saudi Arabian dish known as ‘Kabsa’, the Majboos is an aromatic rice-and-meat dish. It has similarities with the biryani, but does not use any yoghurt or garam masala. Meat — chicken, lamb, fish, or even camel — is marinated and then slow-cooked in traditional sauces, before being added to the rice. Variations on the basic recipe abound throughout Qatar. Read more about Qatari food here.

Bolon de Verde are basically dumplings or fritters made of green plantain. Rather than a snack though, these are filling enough for a main meal, and are popular at breakfast/brunch. Each dumpling is slightly larger than a cricket ball in size. The outer layer is made of green plantains that are fried over low heat until tender, then mashed into a dough. Pork (or other meat of choice) is mixed with cheese for the filling. Once the dumplings are prepared, they’re pan fried until golden brown.

Thiéboudienne is a rice and fish dish that owes its origins to Saint-Louis in Northwest Senegal. Rice, fish and a selection of vegetables (like potatoes, cassava, plantains, pumpkin) are all simmered together in a pot in a base of tomato sauce. In keeping with Senegalese tradition, thiéboudienne makes for a one-pot, communal meal. You’re also bound to find a helping of sosa kaani (a very spicy sauce made from Scotch bonnet peppers, reportedly “40 times hotter than a typical jalapeño”) on the side. 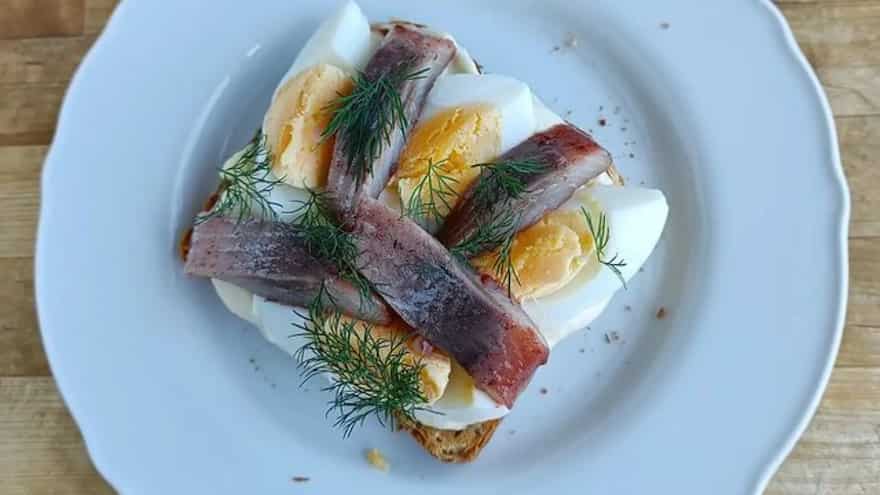 Pickled Herring - Instagram - @dillgravlax
Sure, Dutch poffertjes (small, baked pancakes served with butter and icing sugar) are probably as much a signature dish in the Netherlands, but we’re going with ‘maatjesharing’ — the soused or pickled herring that is considered a delicacy here. The cleaned, raw, lightly brined fish must have a fresh, salty taste. It is coated in chopped onions, held by its tail end, and then put into your mouth in one go.

Some might argue that Chicken Tikka Masala or Fish-n-Chips or even Yorkshire Pudding is the real national dish of the English, but to them we say, did Henry Fielding dedicate a poem to any of these undoubtedly toothsome morsels? Fielding’s words about the dish that came into prominence during the reign of (another) Henry (VII) in 1485 run thus:

The era of the Qajar dynasty, which ruled over Iran from Iran from 1789 to 1925, is believed to have given rise to the national Iranian dish of Chelow Kebab. Steamed rice is served with accompaniments like sumac powder, butter, basil, onions and grilled tomatoes. On top of it, a skewer of kebabs is placed, along with a piece of flatbread like lavash. The meal is washed down with a glass of “doogh” (a yoghurt-based drink that sometimes uses carbonated water). Read about the Chelow Kebab’s Indian connection here.

1845 is when the hamburger’s history is believed to dovetail with that of America. A Virgian named CA Coffman patented his “Machine for Cutting Sausage-Meat”, a precursor to the meat grinders for the mince that forms the mainstay of a hamburger patty. By 1885, two vendors at two country fairs (in New York and Wisconsin, respectively) would claim they had served the first burgers — squashing a ground beef patty between buns for on-the-go clientele. The rest, as they say, is (fast food) history.

A hearty meat-and-vegetable stew, the recipe for the traditional Welsh Cawl varies greatly as it relies on seasonally available produce and affordable cuts of meat. Bacon, Welsh lamb or beef form the meaty part of the dish; often, cheaper but more flavourful cuts on the bone that wouldn’t make it to other dishes will find their way into the pot for Cawl. Root vegetables like potatoes, rutabaga will be added with onions, leeks and carrots to the pot and left to simmer for several hours. The spices are minimal: a bay leaf, some black pepper, kitchen herbs and salt. The Cawl is had with bread and cheese, and the broth is served first, followed by a helping of the meat and vegetables.

Quiz: National dishes of the World

Ema Datshi: Bhutan’s National Dish Is Not For The Faint-Hearted

Uganda's National Dish Matoke Is Easy To Recreate At Home