The Best Dishes To Go With An Oaksmith Sour

Oaksmith Gold is the ideal base for a whisky sour, which pairs well with the intense flavours of fajitas and chicken tikka. A first of its kind blend that brings together the best of Scotland and The United States of America by blending premium aged Scotch Malts and aged Kentucky straight Bourbon with world class Japanese craftsmanship, Oaksmith Gold is a versatile spirit. The maltiness and smokiness, which are a result of the addition of scotch malts in the blend, complement robust flavours. Oaksmith Gold is the ideal base for a whisky sour, which pairs well with the intense flavours of fajitas and chicken tikka.

A whisky sour contains whisky, lemon juice, sugar and, optionally, egg whites to give the drink a foamy texture and appearance. If egg whites are being used, the cocktail is often called a ‘Boston sour’. Here’s a version of the drink that uses Oaksmith Gold: 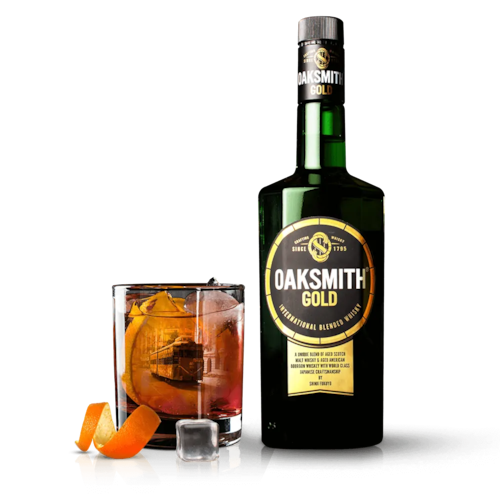 Food pairing: Mexican tortilla based dishes like fajitas, or Indian meat/non-meat appetisers (heavy snacks) go well with the sweetness and slight tartness of the Oaksmith sour.

Mexican ranch workers in Texas invented fajitas towards the end of the 1930s and the beginning of the 1940s. These workers were often paid with unwanted parts of meat like the head. They turned these unappetising parts of meat into meals by grilling the meat and serving it with tortillas.

‘Tikka’ is a Persian word that translates to ‘bits’ or ‘pieces’. Chicken tikka originated within the Indian subcontinent during the reign of the Mughals. It is traditionally eaten in India, Pakistan and Bangladesh. To make chicken tikka, chunks of boneless chicken are marinated and grilled on skewers.

Pair Your Favourite Oaksmith Mule With Chilli Chicken And Chicken 65