Smoked Chaas: A Drink Worth Sipping On What do you call a health-laden, sour, cooling and toothsome yoghurt-based drink that comes deep from the treasures of age-old Desi food tradition?  Chaas? But what if it exudes an intoxicating smoky flavour too? Well, then it becomes Smoked Chaas. This Chaas does involve regular ingredients namely yoghurt, mint, coriander, black salt, salt and cumin blended into a quintessential sour and rich buttermilk. But wait…this isn't it. It has some more thrill following up. It is tempered with mustard oil, cumin seeds and chilli paste which is splashed into the Chaas to infuse the tadka flavour. Lastly, the drink is smoked with oil, charcoal, cloves and curry leaves to bring home one of the most sizzling and enchanting Chaas ever. 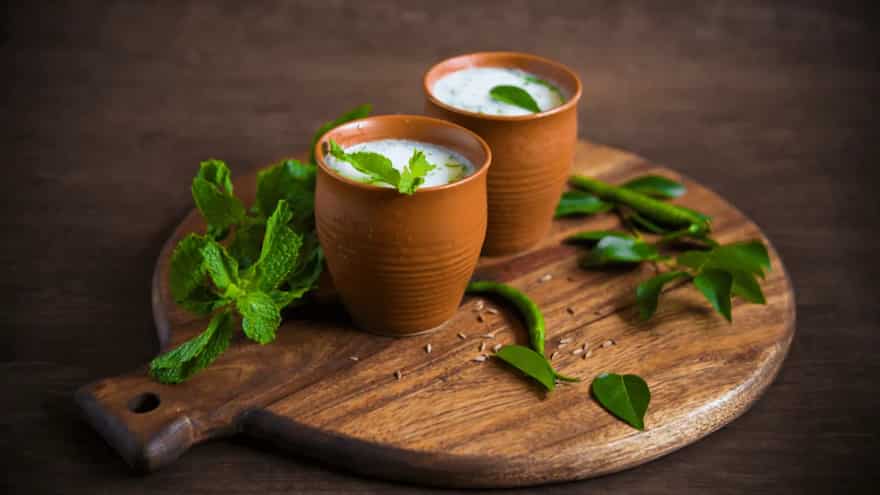 The Lineage And Tradition of Chaas

Chaas have indeed been an intrinsic part of Indian cuisine for a long time. It is consumed throughout the country, throughout the year, and mainly for refreshment and hydration during summers. Chaas mainly denotes buttermilk with salt. A yoghurt-based drink, it is known by various names in various states and consumed with some regional variations. Punjabis call it Chaach, Rajasthanis and Odia people know it as Ghol, Tamilians and Malayalis call the drink Moru and Bengalis know it as Tulu. Traditionally,  a few days old yoghurts are used to make it to get a sour taste and to finish off the leftover curd at home. The other common way of making Chaas is by seasoning fresh yoghurt with a variety of spices and tempering it with cumin and mustard seeds.

Historically, Chaas used to be made by churning yoghurt and cold water together in a pot, using a hand-held instrument called Madhani or wooden hand masher. It is then consumed after adding salt or a variety of spices, depending on one’s choice. This drink helps in combating acidity, detoxification, easing constipation, and improving digestion and is a great probiotic and rich source of calcium and Vitamin B. A Chaas differs from Lassi, in that it has a palatable sour taste and is much diluted.

Here’s the recipe for Smoked Chaas.

Add two cups of cold water to the mix and blend well.

Now heat the oil and add cumin seeds and green chilli paste. Sauté the mix for a few seconds.

Add to the Chaas and mix well.

Now pour the Chaas into a large bowl and take the heated coal into a small bowl and keep the bowl inside a larger bowl.

In the small bowl, add curry leaves, cloves and pour oil over the coal and fully seal it with aluminium foil.

Let it sit for 5 minutes. Remove and serve in a tall glass.

Try These 5 Chaas Recipes To Soothe Your Soul

Try this refreshing beetroot chaas recipe to escape the heat