Overflowing of the Sakkarai Pongal from the vessel is considered as a good omen. It’s Pongal today and every household sees some special dish or the other. Pongal happens to be a very popular harvest festival in the Southern region. The word ‘Pongal Is derived from Tamil literature where it means ‘to boil’. The name also coincides with that of a dish that’s made from rice. This harvest festival follows the solar calendar. Celebrated on the 14th of January every year Pongak which also falls on the same date as Makar Sankranti signifies when the sun enters the zodiac sign Capricorn (Makar) and thus the name Makar Sankranti. During the Dravadian era Pongal was called as Sanskrit Puranas. 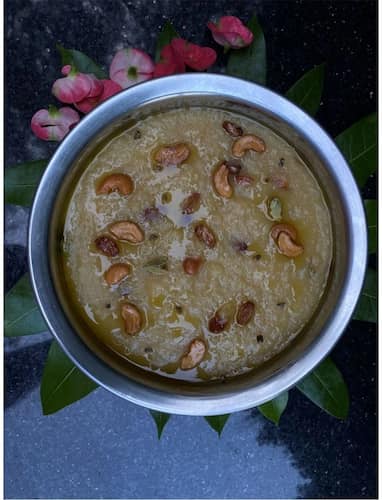 The festival is celebrated across three days and one on the second day this prominent dish Sakkarai Pongal or Sweet Pongal is cooked. This sweet porridge is made with rice, moong  dal, jaggery and cardamoms, dry fruits. Also known as chakkara pongal this festive dish is cooked and offered to the Mother Goddess. Ancestors say that this dish is a symbol of abundance and prosperity after the harvest. In many homes sweet Pongal is also prepared in Tuesday’s or Friday’s in Laksmi or Durga temple. This Naivedhyam dish holds much significance on Pongal. Cooking this dish the traditional way is followed Tamil Nadu, Pondicherry, Andhra Pradesh, Telengana and Jaffna (Srilanka).

On the 2nd day of  Pongal, milk is boiled in a pot and when it starts to boil the fresh harvest from rice is added. Overflowing of the Sakkarai Pongal from the vessel is considered as a good omen. Once cooked the Sakkarai Pongal is served to the family members along with some paayasam, vadai, and more.

•    Pressure cook the rice and dal with milk and water, over a slow flame until nicely mashed up.

•    Meanwhile cook and melt the jaggery to make a syrup.

•    Once the rice and dal is cooked well add in the jaggery syrup, keep stirring over a low flame and allow the pongal to become little thick.

•    Add cardamom powder and pachai karpooram, remove from the fire.

•    Heat ghee in a pan and add in the cashew nuts, when the cashew starts becoming brown in colour add raisins and remove from the fire. Leav the cashew and the raisins in the ghee for another 10 seconds and add to the Pongal. Mix well and serve hot.

5 Authentic South Indian Dishes To Include In Your Pongal Platter

Pongal 2022: Soak In The Festivities With These 5 Lip-Smacking Desserts For Your Sweet Tooth