Pressure Cook Or Slow Cook? Choose The Right One As Per Your Dish

Water is not necessary for a slow cooker, however you might want some kind of moisture. For the process, a pressure cooker needs liquid or water Every night, we seem to be caught off guard when it comes time for dinner. It's not so much that it surprises us as much as it is difficult to find the energy to prepare a large dinner once the long workweek is through. It can take a long time to prepare things.  We have to fit a lot into the brief window of time between the end of the workday and night. Why make things more challenging than would be necessary? We advise using tools that make the procedure simpler as a result. What about using a slow cooker or a pressure cooker to make mealtimes easier?

Also read: 7 Ways To Use Your Pressure Cooker Cautiously

What distinguishes a pressure cooker from a slow cooker? Although they both have identical goals, these two really operate in quite distinct ways. Your dinner will be cooked slowly in a slow cooker, typically over a period of several hours. You can set it and forget it thanks to this. A pressure cooker, on the other hand, is made to cook meals quickly. Instead of baking a whole chicken for several hours, you can cook it quickly.

Most likely, you've heard of the Instant Pot. Over the past few years, it has swept the globe. Although the Instant Pot concept has been around for a very long time, it completely changed how pressure cooking was done. Steam pressure is used to operate a pressure cooker. Pressure is created when the food container seals and the steam accumulates. Moreover, the pace at which liquid is forced into the food is accelerated by the increased steam pressure. The pressurised liquid helps the food cook considerably more quickly while also tenderising it.The food inside is cooked more rapidly and effectively thanks to this technique. The majority of pressure cookers offer a variety of settings and can prepare nearly any type of food. You may prepare full meals at once and drastically cut down on cooking time. Additionally, since you're only using the pressure cooker's pot, there will be less dirty dishes and less clutter. The pressure cooker's underlying premise is not brand-new. Since the 1600s, people have been using this device. Naturally, it required some time to refine the idea and to make it usable. Due to the steam pressure buildup, pressure cookers have been known to explode if not handled properly. 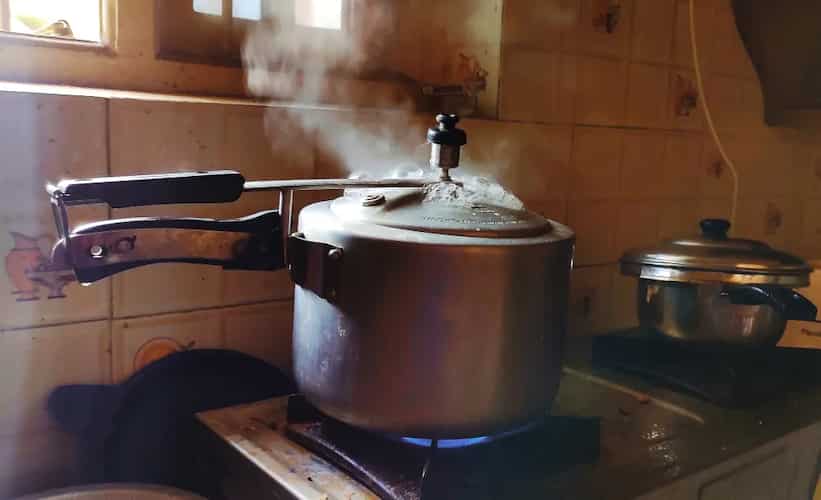 A slow cooker uses a low heat. Instead of using steam pressure, it only makes use of a heated bowl that is covered with a lid. Crockpots are a frequent nickname for slow cookers. In order for a slow cooker to function, food must be simmered there for an extended period of time at a low temperature. These cookers slowly cook the food within by using moist heat. Keep in mind that slow cookers produce food slowly while pressure cookers are frequently used to produce food quickly. The only thing that is similar about both is that they both contain a heating element that accommodates a pot and is covered by a lid. This enables you to place the meal in the cooker at the desired temperature and leave it there for hours without having to intervene. Literally, you can set it and forget it. This implies that you can prepare your food and set it up before returning home to a finished meal. Even though some meals take longer than others, this tool is useful because you don't have to keep track of it. While the food cooks, you can do your tasks. Slow cookers were once mostly used for soups and stews, but people are getting more inventive with them and you can prepare a tons of wonderful stuff.

It's interesting how many dishes may be prepared similarly in a pressure cooker and a slow cooker. It only depends on how you prepare them while doing so. Because they are easy to operate and get better the longer they cook, slow cookers have traditionally been a popular option for soups or beans. But the slow cooker has inspired a lot of innovation, and you can prepare a tons of different things with it. Several stews and soups, mac and cheese, lasagna, brownies, and many other dishes. These are only a few examples of typical items that cook well in a slow cooker. Do not let them constrain you. You can create so many different things!

It's intriguing how the functions of slow cookers and pressure cookers can be so similar while also being so different. In either case, the final result is a meal that you don't have to supervise from beginning to end. It's a convenient and simplicity feature designed to make meal preparation easier for you. The way your food is cooked is the key distinction between various kitchen equipment. While the slow cooker simmers the food on low heat, the pressure cooker uses steam pressure. Unlike a slow cooker, which takes several hours to cook a meal, a pressure cooker cooks food quickly. Both allow you to control the functions through a variety of settings and functionality.

Say NO To Pressure Cooking Of These Food Items

7 Ways To Use Your Pressure Cooker Cautiously

Pressure Cooker Chicken Tikka Is Perfect For Your Weekend Binge