Poha Jalebi: Do You Know How This Bhopali Breakfast Came Into Being?

Poha Jalebi is a classic combination from Bhopal that is commonly eaten for breakfast. Do you know how it came into being? If you take a trip to the heart of the city, you wouldn’t be disappointed by the mélange of flavours that are enjoyed by the locals. From street-side carts and shack shops to fine-dining establishments, the aroma of freshly cooked poha paired with a crispy jalebi fill the room. It is hard to get away from this delectable breakfast treat from Madhya Pradesh as poha jalebi enjoys a fan fare in not just Bhopal but Indore too. A quick search online might leave you confused as to where this delicious combination originated but the fact remains that Poha Jalebi is popular across both the cities today. While Maharashtra enjoys a diverse variety of pohas, from kanda to batata and tarri, their technique and ways of making this flattened rice is different from the other parts of the country.

Did you know that poha has been with us since the time of Mahabharata? If you remember the story of how Krishna met his friend Sudama after several years, you would recall that the poor Sudama could only afford to offer his royal friend some poha on his palm. It is said that the poha travelled from Maharashtra to Madhya Pradesh through the Scindias and Holkars when they invaded the state and ruled here. Not only was poha introduced to the Indoris, even Shrikhand was brought to their attention.

Poha, for the unversed, is flattened or beaten rice, that is cooked with vegetables and spices. Unlike Maharashtra, where the poha is garnished with tomatoes and onions, Indori poha is filled with a crunchy layer of the famous sev that enhances the taste of the dish. This gives the dish a new identity which is further enhanced in the Malwa region where Poha Jalebi is a quintessential breakfast dish. Since Bhopal has had a strong Mughal influence back in the day and boasts of shahi tukda and kebabs like no other, it was Jalebi that was paired with Poha to reflect the same. 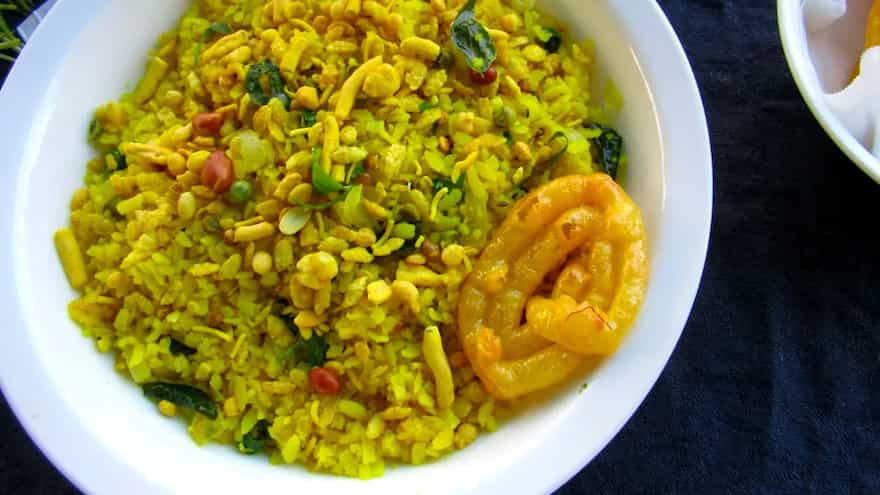 Jalebi’s foreign origins are no stranger to us. From the Persian zalebiya to the Indian jalebi, the journey has been quite interesting. The Mughal era introduced jalebi as an important part of Indian confectionary and little did we know that this crispy, deep-fried dessert would find its way on the breakfast table of Bhopal alongside poha. Dipped in sugar syrup, the jalebi is devoured on the side with the savoury poha and makes for a heavenly breakfast.

To make poha at home, rinse the poha with water and then spruce it up with some lemon, salt and sugar. Boil potatoes and chop some onions. Dunk these into a kadhai with hot oil and add spices like turmeric powder, chilli powder, asafoetida and cumin seeds. Sauté it together and then throw in the poha. Combine everything and let it cook with the lid covered. Once cooked, sprinkle some sev for garnishing.

Next, make jalebi at home by preparing a maida batter. Fill it in a cone and make circular patterns in a kadhai with hot oil. Let it fry till it turns orange. Dip it in sugar syrup and serve with the poha. Your poha jalebi is ready to be devoured.

From Maharashtra, With Love: Try This Quick Kanda Poha Recipe

How To Make Poha: This Simple Aloo Poha Recipe Is Our Latest Favourite Breakfast, Tried It Yet?