Palak Paneer: A Spicy Bowl Of Iron And Cream From the list of vegetarian delicacies that will rule any meal in a North Indian household is Palak Paneer. Well, since paneer is an equivalent to chicken for vegetarians it has devised ways of making a plate scrumptious. The smooth texture of the Palak infused with the rich creamy texture of the Paneer is the ultimate tie-breaker. It is one of the most nutrient-rich and easiest dishes to make for a special Sunday brunch, as well as to add to the kid’s tiffin box for a tasty treat. 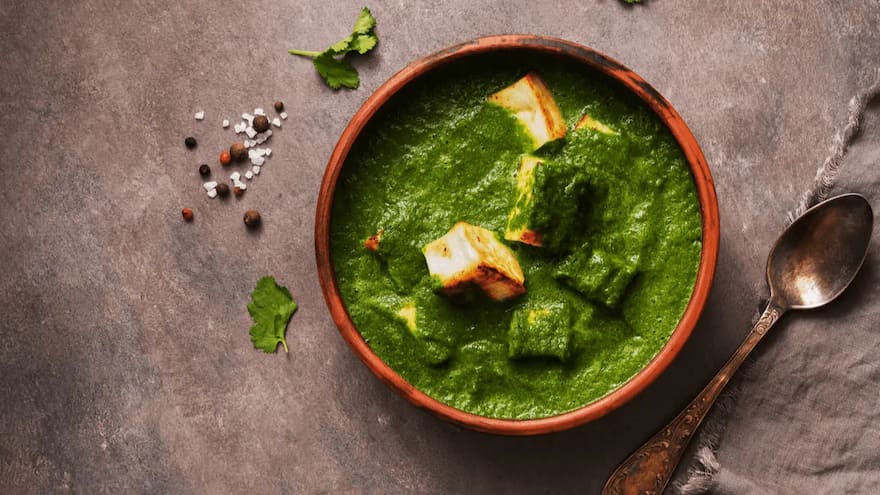 An age-old plant-based mix of iron and calcium

Palak Paneer is a vegetarian dish popular across the states of North India. But the origin of this healthy rich cuisine is from the state of Punjab. Spinach or Palak as it is called in India has been a part of the Indian agricultural scenario for about 2,000 years. It is believed that palak originated in ancient Persia and from there travelled to India and neighbouring countries in 647 AD as a Persian vegetable. However, it stayed back and became Palak.

Though there are no set records as to how Paneer came into existence in the Indian sub-continent. It is estimated to have come from Afghan-Iranian and Portuguese-Bengali origins. As per the Vedic scriptures and many scholars, the acidulation of milk was taboo in ancient India. However, the popular theory traces Paneer having been introduced in India through Afghanistan and Persia during the Mughal rule. According to the theories, Paneer was invented to fit well with the local tastes under Mughal rulers and the Delhi Sultanate.

As for the combination of Palak Paneer, it is a derivate of the famous Saag Paneer that is a staple of Punjab. According to historical records, sometime around 2000 BCE when Ayurvedic cooking was rising, some chefs placed the chopped mustard greens into an earthen pot with yak's milk. Over time as Paneer came into formation, the milk was replaced.

On medium heat, in a pan add two tablespoons of oil. Add diced paneer and shallow fry until it turns brown. Once done, keep it aside.

In another pan add the remaining oil, cumin seeds, ginger, and garlic. Keep stirring until it turns brown. Add green chillies, onions, and sauté for 3 minutes.

Now add the palak puree, salt, water, fried paneer, and butter. Mix all together and let it simmer for about 5 minutes. Garnish with fresh cream and ginger julienne.

Be it a simple Paratha, soft Roti, or aromatic boiled rice, a spoon full of Palak Paneer goes about well with anything. This is one the easiest ways of making children eat spinach, with the goodness of cream and Paneer.

Palak Paneer: A Spicy Bowl Of Iron And Cream