Pahile is a deep-fried flatbread that is made only with lokwan flour, water, salt and vegetable oil but requires immense skill to give it a proper texture and taste There are plenty of Indian dishes, right from Parinde Mein Parinda of Uttar Pradesh to Phulkari Pulao of Punjab that are losing prominence and becoming lost recipes. Especially prepared for royal and rich, these dishes are considered heritage of India and the people are encouraged to preserve it. But why do we only talk about food of riches and not the eating practices of tribal communities of the country? This is the reason several delicacies of primitive communities are on the verge of being extinct.

Most of the traditional dishes of primitive communities were born for survival as normal ingredients were expensive and the communities could not afford it.  This gave birth to alternatives. Like instead of sugar, they used jaggery, as wheat was expensive, they preferred coarse grains and corn rice. They had no masalas so most of their food was simple, only with little oil and salt but still tried to extract the maximum available resources to make their food delicious. Thus, the communities ended up inventing several dishes like Rakti (made with goat’s blood) and Pahile that uses minimum ingredients but the unique art of cooking makes it delicious. 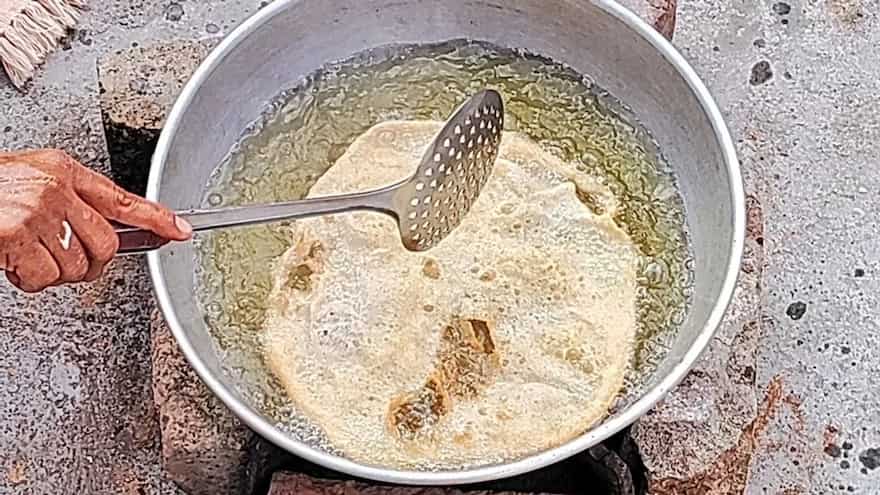 Pahile is a deep-fried flatbread that is made with lokwan flour, water, salt and vegetable oil but requires immense skill to give it a proper texture and taste. It is a traditional dish of Mahar community. Mahar is a Hindu community from Maharashtra, that converted to Buddhism following B. R Ambedkar. Out of the many recipes that have been passed down by older generations, only some of them were able to survive as they were not written in recipe books but passed down through observation and oral instruction. Pahile is one such dish. It has a thin and crispy centre, with chewy and thick edges.

It is similar to Ranya roti of Nagpur, but Pahile requires more skill as frying the batter is tough. Traditionally, it is prepared during Hindu festival, Nag Panchami as this flatbread holds a certain significance. For instance, no other flatbread can be cooked along with it and it should be cooked in an isolated place and not in front of a crowd as people’s eyes can affect the taste and texture of the bread. It is mostly made by women of Mahar community and they sell it too. But slowly the dish is fading away as making Pahile requires a lot of patience and effort.

Like Pahile, there are so many traditional tribal dishes that have been losing their prominence in the face of inter-cultural exchanges. However, it is important to preserve the traditional dishes of a particular community and pass it down to newer generations.

Highlighting The Lost Recipes Of India