On A Canara Coast Food Quest

If you’re craving some spicy seafood and more, keep reading this guide along the way so that you’re ready to head straight to where you should be for the food festivities. Prepare yourself for a flavourful ride filled with all things greasy and good. India’s western coastline has all it takes to make it a dreamy landscape: bright sun, beautiful beaches, gentle waves of the Arabian Sea washing one’s feet, and, of course, a swell of delicacies that can fill your senses and give you new highs.

If you’re craving some spicy seafood and more, keep reading this guide along the way so that you’re ready to head straight to where you should be for the food festivities.

The Magic of Mangalore

Mangalore, known by its original name Mangaluru, is the major port city of the southwestern state of Karnataka. It has long been a melting pot of various cultures, with the visitors who set foot there centuries ago assimilating the local Tulu and Konkani cultures with those of the larger Kannada or Canarese, and some European cultures too. Besides its many educational institutions and spectacular beaches like Malpe, the city is also known for its unique blend of cuisines that nobody can miss.

The city's most famous dishes are Mangalore Buns and Mangalore Bajji. Mangalore Buns, also called Buns Puri and Buns Roti, are not buns but are closer to puris. They are made from all-purpose flour mixed with banana flour and served with a generous helping of spicy coconut chutney.

Mangalore Bajjis, also called Goli Bajjis, are fried snacks that are made from rice flour, coconut, ginger, chilies, curry leaves, and other spices. It’s fried such that the outside is crispy while the inside is soft. Served with spicy coconut chutney, this combination of soft, spicy, and crispy makes one want to keep on eating. Once done, you can savor the region’s famous Filter Kaapi, coffee made from freshly ground roasted beans with sugar and milk served piping hot.

Seafood lovers have a plethora of choices, ranging from semolina-coated fish fries to prawns (shrimps), crabs, and squid. Your choice of fish can be small fries, sardines, oysters, and ladyfish. Other meat options include mutton, pork, and chicken, all with a unique seaside twist. And of course, there's always ghee to make it yummier. Sorpotel is a meat dish that Mangalorean Christians cook well and one that you simply cannot miss out on. Setting the Tongue Free in Udupi

Another coastal district of Karnataka, Udupi is mostly known for its famed Krishna temple, where they serve vegetarian South Indian meals on plantain leaves to devotees and visitors for free, which should be had, if possible, but you can make a small donation as a matter of courtesy.

The region shares a lot of its cuisine with its neighbor Mangalore, including its seafood and tasty Goli Bajjis, Mangalore Buns, and other delicacies. Other specialties include Udhina Gojju (a side dish made from raw urad dal and white pumpkin, with buttermilk as an optional ingredient), Pelakai da Gatti (jackfruit, rice, and coconut batter steamed in teak or plantain leaves), and Pelakai Halwa (a jackfruit, rice, and jaggery mix steamed-cooked in teak or plantain leaves, eaten as a dessert). 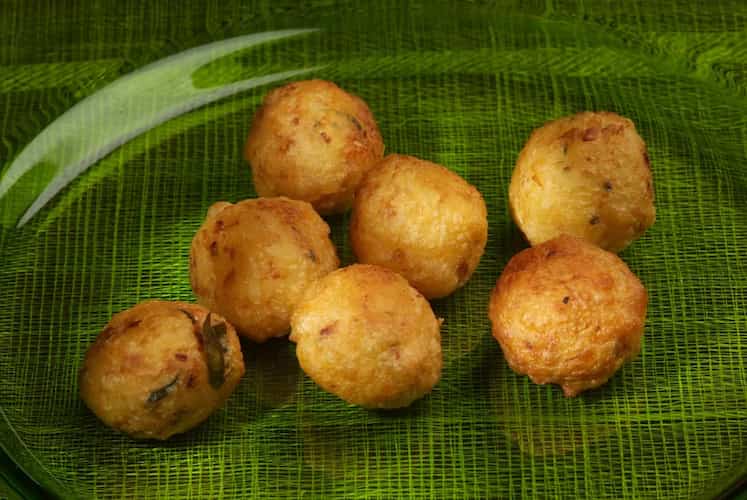 Pattrode is a famous fried snack here made by adding shredded colocasia leaves that are smeared with black-gram and rice paste. Udupi has its own version of this dish with the addition of local spices and lentils. Need something sweet to compensate? Get a plate of Kadubu or Moode. They are cylindrically shaped idlis steamed in jackfruit, banana, teak, turmeric, or pandan leaves. It's made especially for festivals and comes stuffed with either a sweet desiccated coconut and jaggery filling or spicy lentils and pulses.

Some Other Konkan Delights

The Canara coast of Karnataka joins in as a worthy contender for India’s food diversity hub. Whether you want food made from ingredients found under the waves or high up in the coconut trees, and everything in between, it is the place to be.

The Mangalore’s Street Food Fare Is A Foodie's Dream

What Makes Mackerel A Favourite In Mangalorean Cuisine