When we talk fish it’s inevitable to ignore the Bengali’s. There love affair with fish is absolutely deep rooted in their genes. From a simple Macher jhol to a exotic Bhapa Illish it's nothing less than a sentiment for a bong. The best part being Bengali's really know the art to cook each part of the fish, be it a big huge head or a even a nicely cut fillet. Though on a regular everyday basis there’ s no fancy ingredients or complicated cooking methods, but there are also some dishes that absolutely steal the show, one such being Muri Ghonto- a dish similar to a pilaf made with fish head.

In most Bengali household it was said “Maach-er matha khele onek buddhi hobe” which means eating fish head will make you more intelligent. This part of the fish loaded with omega 3-fatty acids happens to be one of the tastiest of all parts. It’s an art to eat a fish head with finesse. For those who don’t know what we are talking about Muri Ghonto is the weaker cousin of Paela (a rice from Spain that’s loaded with meat, seafood, vegetables). This exotic dish made with Gonbindobhog rice and rohu fish head is an amazing soulful melt-in-the-mouth dish. The dish gets it’s name from the word 'Muri' or 'Muro' which means head (don’t mix with the Bengali word muri which means puffed rice). This combination of Gonbindobhog rice cooked with fish head is known have come into existence during the old Silk Route. Earlier days when trade was via road or sea route, each port saw some of their delicacies that were left behind once the traders left the port.  Later the modern version saw the addition of garam masala and ghee.

Tracing back the roots this dish it can be said to have originated during the Ganga Dynasty during early 5th century. Kalingapatnam happened to be an ancient port in modern day Andhra Pradesh which then was a part of Kalinga kingdom. Trade was at it’s peak and all traders from Ceylon, Java, Sumatra and others used to come. This created a platform for a cultural medley which saw literature, cuisines, art having a cross pollination. The muri ghonto that was cooked then was much different from what we see today. Originally it was more on a brothy soupy texture, which was made from leftover fish tails and heads and cooked in stock with salt, turmeric, ginger and bayleaf. This one pot meal was very soul satisfying. It was considered to be a hallmark coastal dish. This dish can also be correlated to Persio-Mughal Fish Biryani, with the type of spices that are used. The modern version or the one that we see on our plate sees the exotic play of aroma of cardamom, bay leave and Bengali garam masala. 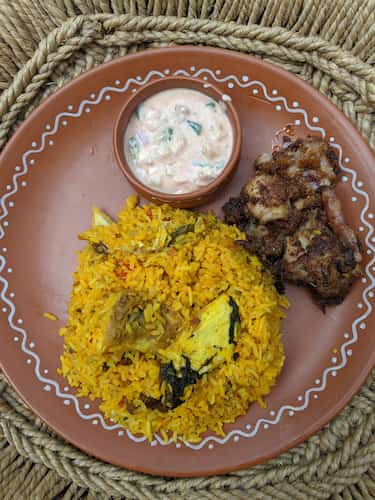 If you are travelling to Odisha you will find another version that’s made with moong dal in place of rice. Mostly found around Baripada and Raj Kanika, this was once even a wedding feast. Be it cooked with rice or dal, this one pot dish is nothing less than a gourmet delight and still happens to be favourite in most household.