Know how and when the world's best Iranian Faloodeh came to India. 'Falooda Kulfi' is very popular in India during the summer and rainy seasons, and there would be barely anyone who doesn't love a chilled bite of this dessert. But have you ever noticed, what is falooda after all, and why is it so different from other desserts? How was it invented, and what is its history? Let us tell you today how did falooda originate and where is it eaten.

According to food historians, Falooda is not Indian; it is a traditional Iranian dessert. Parsis used to eat this sweet during festivals and celebratory occasions. If we talk about the oldest desserts globally, then Falooda is one of them, probably eaten in 400 BC. In Iran, it is called 'Faloodeh' and requires vermicelli, noodles, rose water, and sugar syrup to be prepared. In Iran, this dessert is especially eaten on the occasion of 'Jamshedi Navroz'.

How Falooda came to India?

According to various food historians, Falooda was brought to India by Jahangir, the son of Mughal emperor Akbar. Food historian K. T. Achaya has also mentioned this fact in his book 'The Story of Our Food'. 'When Jahangir reached Iran to conquer a princely state of Iran, he was persuaded by the culture, royal food and water. Jahangir liked falooda the most in Iranian food, being very delicious and different in appearance too.,’ he stated. If the history is to believe, then one thing is sure that Falooda has been a royal sweet. 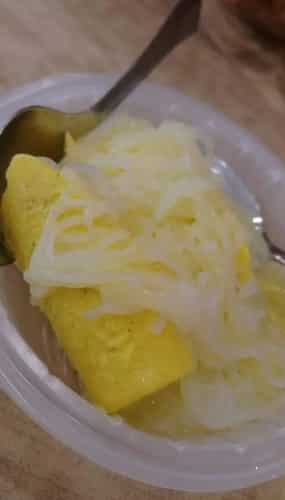 Falooda is eaten in various countries of the world

The journey of Falooda is not limited to Iran and India. But this dish is eaten in other countries with different names, colours and methods. K. T. Achaya also reveals that Falooda was invented to make a Persian drink, but now, different versions of Falooda can be seen in many Asian countries, including India. In the Philippines, falooda is eaten with a traditional sweet dish called Halo-halo. This dish is prepared with milk, coconut and ice cream. In Malaysia and Singapore, Falooda is called Cendol eaten with jelly, red beans, fruits, peanuts, ice cream, and sweet corn. Finally, Falooda is called Alouda in Mauritius and is eaten with bubble tea, strawberries and vanilla syrup.

Falooda is eaten in different ways in various places

In India, Nepal, Pakistan and Bangladesh, falooda is served with ice cream, and in some places, it is filled with basil seeds, vermicelli noodles, rose syrup and milk. Apart from this, Chocolate Falooda, Butterscotch Kulfi Falooda, Shiraji Falooda and Mango Falooda are also available these days. In addition, there is another type of Falooda in Madurai, which is called 'Jigarthanda'.