Indian Sweets That Have Bagged The GI Tag

Take a look at sweets that have received the GI tag India has a long history of enjoying sweets, dating back 8,000 years to the Indus Valley Civilization, when the technology of extracting sugar from sugarcane was developed. The list of Indian sweets is enormous and includes rasgulla, rasmalai, bal mithai, malpua, Mysore pak, sandesh, laddu, kheer, kulfi, jalebi, and many more. Each state has its own unique sweets produced with materials that are readily available nearby. Indian sweets are created with milk, flour, ground pulses, rice, and other ingredients in addition to the numerous types of sugar and jaggery.

Some sweets have also been given the Geographical Indication (GI) label, which denotes that they were made with materials and methods specific to the region of their origin.

The exclusivity of GI, a type of intellectual property right (IPR), is attributed to the community within a specific geographic area rather than to an individual (which is the case with trademarks and patents).

This Indian sweet originates in West Bengal's Burdwan. Due to its finer grains, it is frequently referred to as the micro relative of boondi. It received the GI tag in 2017. Gobindobhog, Kaminibhog, and basmati rice are ground into a powder, and then saffron and gram flour are added in small amounts for colour. It is then manually mixed. The mixture is then poured through the tiny holes in the brass ladle, deep-fried, dipped in sugar syrup and drained. 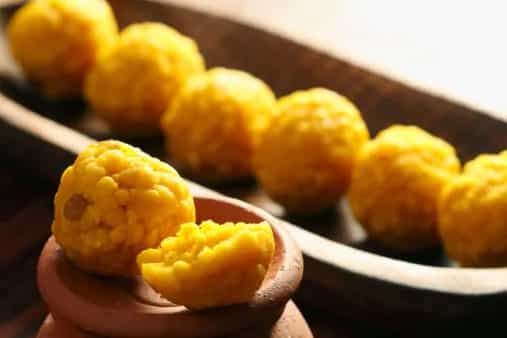 This sweet is exclusive to Karnataka and gets its name from Dharwad. The three major components are Dharwadi buffalo milk, sugar, and milk. The Thakurs of Uttar Pradesh immigrated to Dharwad in the early 19th century, and Ram Ratan Singh Thakur, a first-generation confectioner, began producing and marketing pedas locally. Their business gradually expanded to other regions of Karnataka.

Rasgulla's Bengali equivalent, Banglar Rosogolla, received the GI designation from the Indian GI Registry. But in 2019, after Odisha gained a GI tag for its own version of rasgulla (the Odisha Rasagola) as well, the protracted conflict between Bengal and Odisha came to a conclusion. The taste and texture of each are different. Those from Odisha stated that their rasgulla dated back to the 12th century since they were served at the Puri Jagannath Temple, contrary to West Bengal's claim that Nobin Chandra Das of Kolkata was the inventor of the rosogulla. 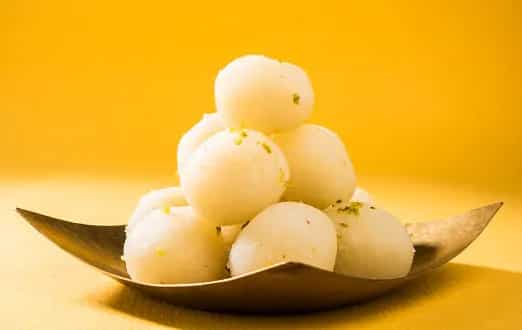 The sweet chikki, which is made from peanuts, is a well-liked snack in India. However, if you want to try the unique kadalai mittai, you must travel to Kovilpatti in Tamil Nadu. Local producers claim that the sweet's distinctive flavour is due to the addition of Thamirabarani River water to carefully procured groundnuts and organic jaggery. In April 2021, the sweet received its GI label. Silao Khaja of Bihar received the GI tag in 2018 after Silao Khaja Audyogik Swavalambi Sahakari Samiti Limited submitted an application. The temperature and water of Silao are said to have influenced the delicacy's flavour and appearance. It consists of 12 to 16 incredibly thin dough sheets stacked one on top of the other and is crispy and multilayered. Its ingredients are wheat flour, cardamom, aniseeds, maida, ghee, and sugar, and it has a pale yellow colour. According to a legend, Buddha was given Silao Khaja while he travelled from Rajgir to Nalanda and went through Silao. After it is created, the sweet lasts for roughly 12–15 days.

Sitabhog from West Bengal resembles vermicelli combined with little gulab jamuns. Rice flour, sugar, ghee, and chhena are the ingredients in this delicious dessert. According to legend, the Maharaja of Burdwan directed confectioners to produce Sitabhog and Mihidana for his British visitors. In 2017, Sitabhog received the GI tag. A well-known sweet dish from Goa, Goan Khaje is served at church feasts and temple processions (jatra). After the religious service, followers stroll through the jatra fair, where Goan Khaje is one of the usual and well-liked foods that are piled high. A fried sweet dish made with chickpea flour, ginger, jaggery, and sesame seeds. They are small sticks around the size of a finger that are covered in jaggery, ginger, and sesame seeds. Traditionally, thick sev made of chickpea flour dough are rolled out, deep-fried, and then covered in ginger-infused jaggery syrup. The sweet received the GI tag in 2020.

Did You Know These 4 Indian Sweets Have Foreign Roots?

Diwali 2021: 5 Indian Sweets To Celebrate The Festival Of Lights