Gujarati cuisine is perceived to be deceptively simple, thanks to its vegetarian profile. It is, actually, multi-layered, subtle and nuanced and is one of the most fascinating Indian cuisines, personally speaking One of the coolest perks of having worked as a journalist across different corners of the country, has been about getting close and personal with the novelty of unique regional cuisines.  One such cuisine which has left an ever-lasting impact on my palate, mind and soul, is the deceptively simple, subtle-yet-nuanced, part-robust, Gujarati food.  Though I must confess, that it took a while to get used to the earthy, hardy and distinct flavours of the predominantly arid state’s cuisine.

Today, however, Gujarati farsaan (snacks) such as khakhra, sev mamra and bhakarwadis have found a permanent corner in my pantry and I make methi theplas almost every other week. I even dare to try making the odd dhokla and khandvi out of ready-to-make mixes, far away here in Hyderabad. I shamelessly ask every friend visiting from Ahmedabad to bring along a stash of Induben’s globally famed khakhras. And every time I unpack Induben’s super-crunchy khakras made of wholewheat, besan and a minimal number of spices and seasoning, from her original store in Navrangpura, I am hit by a wave of nostalgia. I am transported at the first bite, to my first visit to her tiny store (packed to the beams) two decades ago on a friend’s recco and being a ‘bhakt’ ever since. 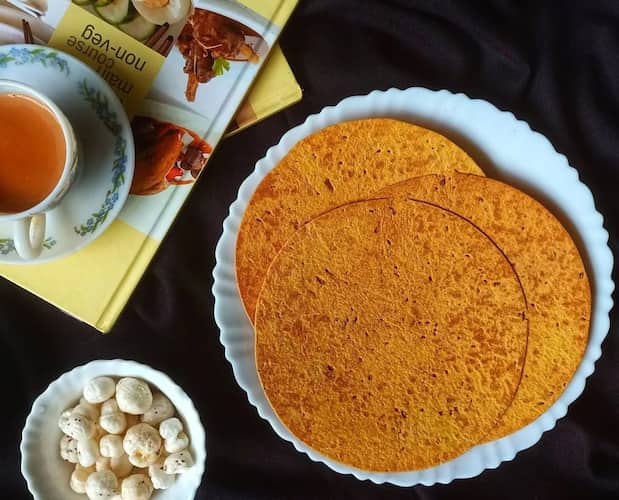 Induben, who started the venture from her home in a tiny space six decades ago, might be no more, but the crunch and freshness of her khakhras have spread far and wide across the seven seas. True to the Gujarati spirit of entrepreneurship, Induben’s khakhras come in a mind-boggling variety of flavours, moving from erstwhile Methi, Masala and Jeera variants to Mexican, Pani Puri, Punjabi, Manchurian etc. For the health conscious, there are diet and low fat khakhras and millet-based ones like ragi/bajra khakhras known as bhakris, which pair brilliantly with a cup of ginger tea, and of course there is a separate listing for Jain khakhras too. That’s catering to customers for you!

When we moved to Ahmedabad in the new millennium, we were delighted to discover soon that every locality worth its name, has a small to middling restaurant selling reasonably priced Gujarati vegetarian thalis. Most of them don’t score too high on the ambience quotient but when it comes to food, nobody is second. Ditto with service, efficient and with clockwork precision and warmth.

The sight of a Gujarati thali being served and filled up is always a pleasure to watch. An assortment of farsaan like dhokla, (either the white, sooji one or the yellow besan version), khandvi, ghooghra (pastry shaped like a ‘gujiya’ or, if the chef was adventurous enough, they would be shaped like moneybags, with a crisp crust and soft filling, usually savoury peas mix) would be first placed on the humungous-sized thali.

Chutneys, green (coriander-mint-green chillies) and red (the tangy-sweet-hot tamarind and dates) would be plonked next, along with athanu or pickles, mango, mostly and sometimes a fresh green chillies pickle and in early winter, a fresh turmeric one too. Hot bajra ka rotla, wheat rotlis, would follow, to be paired with shaak or any vegetable curry, like Aloo Shaak. There would be the famous khatti-meethi Gujarati dal, spiced up with kokum and boiled peanuts, a dry pulses or sprouts stir-fry. There would be khichdi or pulao next with the tangy-sweet Gujarati kadhi and finally a sweet, usually a gulab jamun and if you got lucky, shrikhand or phirni. All this would be downed with the lightest, fluffiest buttermilk or ‘chaas’ laced with jeera powder.

While to the outsider, Gujarati food is often seen through the dhokla-khandvi-patra-dabeli prism, there are just so many layers waiting to be unravelled over time. For me, Handvo (a thick savoury cake made of fermented rice and lentils batter, spiked with bottle gourd and other veggies) ad Panki (rice flour batter mixed with curd and seasonings, wrapped in banana leaves and shallow fried) were the most novel as it gets when it came to Gujarati cuisine, when I tried both at a traditional Gujarati wedding feast for the first time.  So was my first taste of Fafda, made of besan, salt, chilli powder and ajwain, which is served with a crunchy raw papaya chutney and more often than not paired with jalebis, being a festive treat during Dussehra or Makar Sankranti, the kite flying festival which grips Ahmedabad in January. My moment of revelation, however, about how nuanced Gujarati cuisine truly was, is when I had Dal Dhokli for the first time, ironically while leaving Ahmedabad after four long years.  It was the centrepiece and if I am not mistaken, the only dish (other than dessert) at a farewell dinner for us hosted by Ms Ela Bhatt (the founder of well-known NGO Sewa) at her home. A simple and austere affair, in keeping with her Gandhian way of living, this dinner was made memorable by the absolutely splendid one pot dish, often referred to Gujarat’s version of pasta.

Of course, I was more familiar with winter special puri-undhiyu, which can definitely count among Gujarati signature specials, originating from Surat, and which restaurants got on their winter menus, without fail. A one pot dish, undhiyu is made of an assortment of vegetables like yam, sweet potato, baby brinjal, green pigeon peas (the green tuvar dal beans available in wnter), ivy gourd, and Indian flat beans or Surti papdi. Steamed fenugreek dumplings made of besan or methi muthiya are also a lovely addition to the vegetable casserole, which is a festive treat dring Makar Sankranti.

Undhiyu is derived from the Gujarati word Undhu which means upside down. Undhiyu was traditionally cooked in earthen pots placed upside down in a fire pit and fired from above and cooked on a slow fire to get that rustic, earthen flavour.

Come summer, every Gujarati’s attention veers to aamras-puri, a combo catered to by every F&B establishment. The taste of hot and fluffed up puris dunked into chilled, thick and delicious aamras (made mostly from Alphonso mango pulp) is heavenly. Gujarati desserts are not too many and are mostly milk-based, like the creamy and rich shrikhand and phirni. Or their thickened version of kheer called Doodh Pak, which is made more luxe, with the addition of saffron and nuts.

My favourite, however, remains the little-known Sukhdi, also known as Gur Papdi, made of wholewheat flour, jaggery and ghee. The texture of sukhdi is a perfect balance between smooth and hard, and is always a wholesome edible experience.

Ironically, Gujarat boasts of India’s longest coastline and is the frontrunner in fish production, and  yet the state is predominantly vegetarian. While shops selling fish and meat are few and far between, I recall shopping for our weekly fish basket from the Gujarat Fisheries vans parked outside the IIM campus in Vastrapur. All the Bengali, Malayalee and Telugu folks living in that part of town would be patiently waiting in queue for their turn. Friends tell me things have changed since in terms of the supply chain, and there are of course fish and poultry delivery apps today.

Though five-star buffets had a separate non vegetarian counter, it was only a handful of restaurants who had meat dishes on their menu, and obviously found several cosmopolitan patrons. Meat lovers throng the Muslim-dominant older parts of the city, like Lal Darwaja and Sidi Saiyyed Mosque as well as Teen Darwaza) for the best Bohra Khichda (mutton-broken wheat stew much on the lines of Haleem) and beef samosas.

Gujarati restaurants are not so much about ambience and atmospherics. However, a few fine-dine Gujarati speciality restaurants like both Agashiye and Green House (which blend tradition and modernity with the most pleasing aesthetics) at the House of Mangaldas, Vishala which, besides providing a typical ethnic dining experience, has an amazing Utensils museum worth a look for any tourist, Swati Snacks (branches in Ahmedabad and Mumbai) are definitely worthy of mention for doing their bit of putting traditional  Gujarati specials like Handvo, Panki, and other notables in the sun, by giving them a contemporary makeover. In recent times, the Mumbai-based Gujarati restaurant Soam is making waves for its modern plating and makeovers. This is one place I have been waiting to visit for re-visiting the flavours of Gujarat.