From a nutritional point of view, cooking oils are just fats, packing nine calories per gram. They’re devoid of proteins and carbohydrates and have three parameters that we use to judge their utility for our health: smoke point, refinement process, and cholesterol impact Indian food without oil Unimaginable, right? Sunflower oil, traditional mustard oil, old-school sesame oil, coconut oil, and groundnut oil—these oils are used in cooking by Indians in various parts of the country, depending on how the cuisine evolved, the climate of the region, etc.

From a nutritional point of view, cooking oils are just fats, packing nine calories per gram. They’re devoid of proteins and carbohydrates and have three parameters that we use to judge their utility for our health: smoke point, refinement process, and cholesterol impact. The higher the smoke point, the more versatile that oil’s uses in cooking are because it does not lose its nutrients. For instance, sunflower oil is popular in our daily use, especially for frying, because it has a higher smoke point of 227C. For comparison, good old ghee has a smoke point of 233°C, coconut oil has a smoke point of 175°C, and regular olive oil (not extra-virgin) has a smoke point of 200°C. These temperatures are a result of the refinement process, where the oils are treated with chemicals, usually hexane, which is harmful to the nervous system if consumed in large quantities. Some fats turn into trans fats during the refinement process and give off such a bad odor that the oils are essentially bleached. That’s why refined oils have a bad reputation these days. They are more stable and can be stored for long periods, hence their ubiquity in modern times. We tend to think that going oil-free is healthy, but the truth is more nuanced. Good oils add good fats to our body, making us healthier. Refined oil is usually stripped of the good stuff and has fewer health benefits. On the other hand, unrefined oils undergo minimal heat processing and no bleaching, hence the labels "cold-pressed, raw, pure, virgin, extra-virgin" etc. Cold-pressed oils are known as "Kachi Ghani" in the Hindi-speaking parts of the country. They retain good fats and have better fatty acid profiles. But they spoil faster than refined oils and must not be stored longer than 6 months.

When it comes to the traditional usage of cooking oils in India, we can spot patterns depending on region and climate. For example, mustard oil is used in the northern parts, especially during the colder months. Coconut oil is easier to find and more popular near the coast and in the southern states.

1. Coconut oil: This oil is used primarily in the five southern states of Kerala, Tamil Nadu, Karnataka, AP, and Telangana. Ayurvedic texts estimated to be 3500 years old mention using coconut oil for cooking food. It received bad press some years ago because of its saturated fat content, but, as it turns out, coconut oil is the exception to the rule. Yes, it is relatively high in saturated fat but has been used safely for millennia in Kerala and other parts of India. Multiple research studies show that virgin coconut oil is rich in medium-chain triglycerides (MCT), which reduce blood cholesterol. They are also beneficial to your hair and skin, as well as your gut health. India consumed 470,000 metric tons of coconut oil in 2022, the fourth-highest amount in the world. 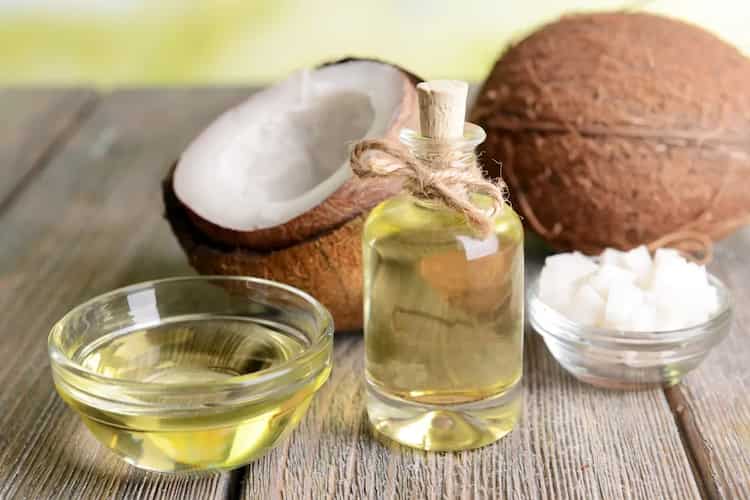 2. Groundnut oil: The general consensus is that groundnuts or peanuts were introduced in India after the Portuguese came visiting. According to Achaya, "The first report of groundnut cultivation in India is only dated 1800 AD. He noted that even by 1850, only around 1000 hectares were used for growing peanuts in the Madras Presidency. Over the next five decades, this would increase exponentially. In the 1890s, hardly anyone in India knew about the oil from peanuts. Then, a king or  chieftain, Maharaja Bhagvatsinhji of Gondal, near present-day Rajkot, took an interest in this legume. By the 1990s, groundnut oil accounted for two-thirds of all seed oils produced in India. Not surprisingly, it is popular in the central parts of India—Gujarat, Maharashtra, Madhya Pradesh, Chhattisgarh, etc. It has a great fatty acid profile when not refined: 80% of this oil is unsaturated fat. It also contains resveratrol, an antioxidant that is very good for cardiovascular health. It does have a low smoke point, so it is not recommended for deep-frying.

3. Mustard Oil: The famous kachi ghani mustard oil is a favorite in the northern and eastern states—Punjab, Haryana, Rajasthan, UP, Bihar, Orissa, West Bengal, etc. It is a great source of unsaturated fats. Records indicate that ancient Indian farmers may have begun cultivating mustard around 3000 BCE. There is also archaeological evidence of mustard at Indus Valley sites like Mohenjo-Daro, Harappa, and Dhola Vira. Achaya wrote that Charaka, in his book Charaka Samhita, described the use of mustard oil in food preparations. In the seventh century, ancient Chinese monks and travelers Xuanzang and Yijing noted the use of this oil in Indian cooking.

However, this oil is less lauded outside India. Mustard oil contains a large amount of a particularly controversial fatty acid called "erucic acid." Tests showed a strong association between this oil and myocardial lipidosis (fatty degeneration of the heart) in rodents. These conclusions prompted the US Food and Drug Administration (FDA) to ban the use of mustard oil for cooking in their country.

In India, mustard oil is commonly used for deep-frying and also for massages. Cold-pressed mustard oil (kachi ghani) is one of the cheapest cold-pressed oils in the country.

4. Sesame/Gingelly Oil: This oil is more common in the southern states, especially Tamil Nadu, Andhra Pradesh, and Karnataka. It is known as gingelly oil in these regions. For a while, Odisha was known as the "gingelly coast" because of the large quantity of sesame oil exported from the region. Achaya notes that sesame seeds were known to the Harappans and that sesame oil was mentioned even in the Atharvaveda, which historians date back to around 1000 BCE. Sesame oil is also mentioned in the oldest Tamil literature. This oil is a good source of antioxidants and is said to be good for the skin, as well as arthritis and joint pain relief.

There are new entrants like olive oil these days, but traditional oils like the ones mentioned above have a higher smoke point that suits Indian cooking better. Ghee is also a good substitute on occasion, but, in the end, make sure you pick the ones that suit your cooking style and your health requirements.

Cheers To The Top 10 Most Popular Cocktails Of 2022

Here Are The Most Popular Local Alcoholic Drinks Of Goa

The Most Popular GI: Hyderabadi Haleem Triumphs Over Rasgulla

Your Guide To The Different Varieties Of Noodles Popular In Asia

5 Popular Indian Dishes That Are Loved In Foreign Countries