Gobindobhog: All You Need To Know About The Aromatic Bengali Rice

From khichuri to pulao, every rice dish obtains an aromatic and flavourful edge when made with Gobindobhog chaal. What more can be said about the significance of rice in a typical Bengali fare that has not been said before. Even beyond kitchen, rice occupies quite a crucial place in many local rituals, like the ‘Annaprashana’ or the first rice-eating ceremony of an infant that takes place after six months of his/her birth. The first thing he/she is fed aside from mother's milk, is rice. In rice-producing states such as Bengal, Bihar and Orissa, each stage of rice cultivation is associated with auspicious events. Gods are invoked, feasts are prepared and the whole community joins in the celebration.

During the Bengal famine of 1942, what could possibly be described as one of the most gruesome chapters of Bengal history, close to 3 million people succumbed to death due to scarcity of food. Rice, which used to be a staple, disappeared from Bengali households and wheat (roti) rose to prominence among those who could afford it, but even this shift couldn’t destabilise the power position of rice in Bengal. A meal is still regarded incomplete without ‘Bhaat’, and it is still as insulting for guests to head back without a serving of rice.

Being one of the biggest rice cultivating states, Bengal works with many variants of rice, that too across courses. Beyond your mains, you can find traces of rice in desserts as well as in snacks. Gobindobhog is one such popular variant of rice that is cultivated and used widely in Bengali cuisine. The rice grain is short, white in colour, because it is short-grained, it is starchier and stickier. It is renowned for its aroma and mild, buttery flavour, which is also a little bit sweet.

From khichuri to pulao, every rice dish obtains an aromatic and flavourful edge with Gobindobhog chaal. Did you know, not Basmati, but Gobindobhog rice is the preferred rice variant to make Basanti Pulao, a sweet, fragrant yellow-hued rice dish, often relished during Basant Panchami (Saraswati Pujo) and the Bengali Bhog’er Khichuri made for Durga Puja. These dishes require starch for them to truly come alive, something that the long, slender-grain Basmati cannot offer.

And that is not where the ‘divine connection’ ends. Its interesting nomenclature is also tied to its usage in the religious offerings made to Govindaji or Lord Krishna. Govindaji happened to be the family deity of the Setts of Kolkata, and in their lavish pujas they would make delicious prasads and bhog, Gobindobhog rice was one of the principal ingredients in the preparation.

Gobindobhog won its GI Tag of West Bengal by the Government of India in the year 2017, was traditionally cultivated in districts of Bardhaman, Hooghly, Nadia and Birbhum. However, later on, other West Bengal regions like Bankura and Purulia also started cultivating the rice grain, along with Bihar’s Kaimur, Naugachia and other rice-producing areas. 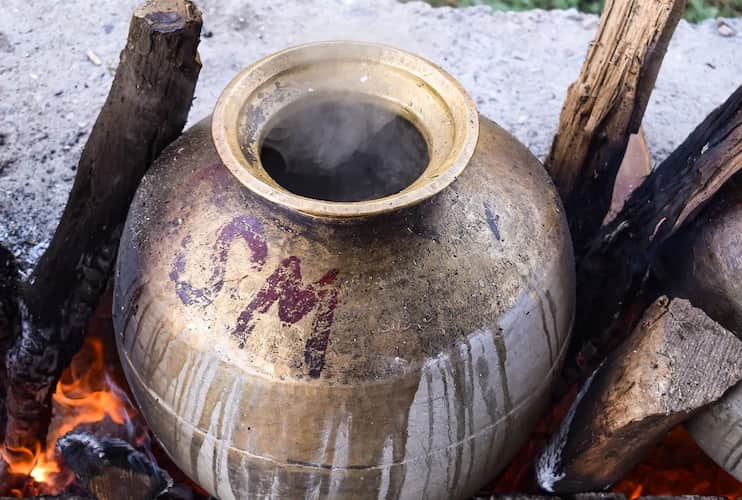 Here is a simple recipe of Gobindobhog Bhaat Aar Ghee (Ghee Rice With Gobindobog rice) that you can try for a warm comforting meal in this weather.

From Blue Rice To Tsunami Cake: 6 ‘Gram Worthy Food Trends That Rocked The Internet In 2021

Quiz: Have a rice day!