Forks, Knives And Spoons: The Origin Of Western Eating Utensils

The origin and evolution of the most common eating utensils that we use. You use them on a daily basis. They're some of the most basic, but quite useful, inventions available. They're used all around the world. But who invented knives, forks, and spoons, exactly?

Since prehistoric times, knives have been used as both a weapon and eating utensils. This makes sense: you kill your food and then cut it into manageable bits with a single tool. Knives, on the other hand, were not tamed or fashioned exclusively for table use until the French Bourbon Dynasty. Due to their aforementioned purpose in murdering for a meal, they were normally extremely sharp up until this point.

As a result, the presence of blades at a table was always a danger. It's vital to remember that wine and ale were major sources of hydration throughout this time period. As a result, it was not uncommon for the extremely inebriated to puncture their mouths while attempting to consume their food.

Naturally, when forks became more popular during the Middle Ages, there was less of a need for a pointed knife during mealtimes. As a result, in 1669, Louis XIV—the same person who liked to make up his hair and wear tights and high heels as was the manly trend at the time—made these exceedingly sharp blades unlawful at the table, replacing them with blunter, broader knives. This has mostly remained the standard until recently, but standardised stainless steel varieties were not introduced until the early twentieth century. 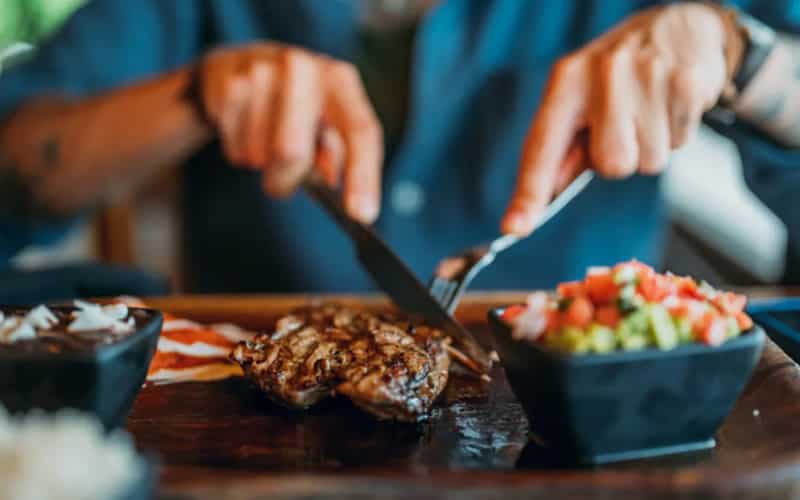 The fork is the newest member of the common cutlery club. These early specimens had only two prongs and were primarily employed for preparing and serving food, despite the fact that they had theoretically existed since ancient times. When it came to eating, fingers, spoons, and knives were still the most favoured options.

Some of the first known table forks were discovered in Ancient Egypt. Forks were also employed by the Qijia civilisation (2400-1900 BC), which lived in a region of modern-day China. The popularity of the fork in the Western world spread via the Silk Road to Venice a few thousand years later.

Due to the iconic historical trendsetter Catherine de Medici, the fork's popularity began to expand during the 16th century. After her marriage to Henry II, she helped popularise the fork (along with pasta, olive oil, chianti, and the separation of sweet and savoury) at French dinners. Anything Italian was fashionable during this time due to the Renaissance.

As cleanliness standards began to shift, the fork became more popular. It had previously been thought that intentionally plugging one's pores with dirt to prevent the plague from penetrating them was a good idea. Many individuals also preferred to blow their nostrils into their palms rather than on the tablecloth, as this was considered impolite. Imagine how these same people would eat with their hands.

Naturally, individuals who desired their meals to be free of grime began to find the fork increasingly appealing. Many males, however, continued to reject them because they were deemed too feminine. When they began to be made with ruffled cuffs, this began to change... This may sound unusual to us, but keep in mind that high heels were initially designed for guys, who often wore them with tights.

Curved forks with tines were commonly used in the 18th century to eat foods like peas. People would also bring their own cutlery sets with them, however, forks were still reserved for the upper crust.

It wasn't until the Industrialization period, a century later, that the lowest and middle classes began to use forks as well. Commoners could even afford to have complete cutlery sets to offer guests, some of which even matched!

Forks swiftly superseded knives as the most common silverware item, resulting in an oversupply of fork varietals created by the Victorians. You can thank them the next time you use one to enjoy some succulent lobster meat. The fork has remained a mainstay in Western life since then. Spoons are one of the world's oldest dining utensils. This isn't surprising when you realise that humans have needed something to scoop up their food for nearly as long as they've needed sustenance. Unlike knives and forks, which had to be fashioned, natural spoons could be made out of seashells or easily formed stones. Sure, the earliest known examples did not have handles, but the spoon was born from these humble origins.

The invention of the spoon cannot be traced back to a certain time period. However, evidence suggests that spoons with handles were used for religious purposes as early as 1000 BC in ancient Egypt.

Wood was the most prevalent material for spoons at the time when it comes to actually eating food, due to its availability and inexpensive cost. Spoons made of bronze and silver, on the other hand, were widespread among the wealthy during the Greek and Roman empires. This was true up until and during the Middle Ages.

Spoons were first documented in England in 1259 when they were included as an itinerary item from King Edward I's wardrobe. Spoons were employed not only for eating but also in extravagant ceremonies and to symbolise wealth and authority, similar to the Egyptians. Every British king's coronation, for example, was preceded by a ritual in which the new monarch was anointed with a ceremonial spoon. The spoon's design evolved during the Renaissance and Baroque periods until settling on its current, generally conventional appearance in the 18th century. Since then, spoons have remained a mainstay of modern dining, and they now come in a variety of shapes and sizes, ranging from soup spoons to caviar spoons. From Forks To Sporks: 4 Unusual Cutlery that can make eating easier

Table Manners: Complete Guide To Use Knife, Fork And Spoon