For The Love Of Tea

From the salty Kashmiri noon chai to the milky, sweet tea that you get on hill stations up North, to Lebu Cha (lemon chai) there is a tea for everyone The boiling water in the pan gurgles with anticipation as I gently pound a small piece of fresh ginger in the mortar and pestle. Tipped in, it is followed up with crushed black pepper for a spicy finish. When the sharp, pungent smell of the adrak fills the kitchen, it’s time for the chai patti to follow suit – the current favourite being single origin Assam tea brought all the way by a friend on a visit to the north-eastern state. Half a teaspoon of coconut sugar, a splash of milk, brought again to a boil and my cup of calm is ready.

The rain is falling in sheets by the time I take my first sip of chai from a much-used (and abused) ceramic cup. All thoughts of work deadlines, Zoom calls and mundane home duties go out the window as the tea has a conversation with the soul, asking it to take some time off to breathe, to slow down and to just be in the moment.

Too much ado about tea? Well, scoff away all you want, but the connection that lovers of this beautiful brew have with it can only be described as magical, not to forget, deeply personal.

Even as the third wave of coffee engulfs the country, and many swear by this energising concoction, India still loves its cuppa chai. According to a report, the country consumed 1.1 billion kilograms of tea in the financial year 2021 and that is a lot of tea! Snigdha Manchanda, Tea sommelier and Founder of Tea Trunk offers an interesting observation. “Over the last decade since I have been in the tea business, I have seen that most people drink tea at home but outdoors, they prefer coffee. As a culture, coffee is a lot cooler. While it is being popularised at cafes, at home we continue to consume tea because it is a cup of comfort,” she says.

That said, tea cafes and lounges such as Chaayos, Taj Mahal Tea House and Tea Villa Café among others are also doing a thriving business with many varieties of teas and snacks on offer. The popularity of tea can be gauged from the recent inclusion of desi masala chai to coffee chain Starbucks India’s revamped menu!

For this tea-loving nation, chai is not just a beverage, but a deeply-rooted part of our culture. Atithi devo bhava remains incomplete until you have offered your guests a cup of chai and god forbid if you serve a badly made one! There even is a name for the fear of being served a poorly made cup of tea – Tepidophobia! Google it.

I may not suffer from this phobia but my colleagues and I did end up tasting the tea at almost 15-20 chai stalls near our new office building in Worli and failing to find one that hit the mark. In our heads, we were comparing them to the one lone chaiwala stall near our former office building that consistently doled out the most perfect cup of adrak chai. Did we end up finding a new favourite? Alas, that was not to be. 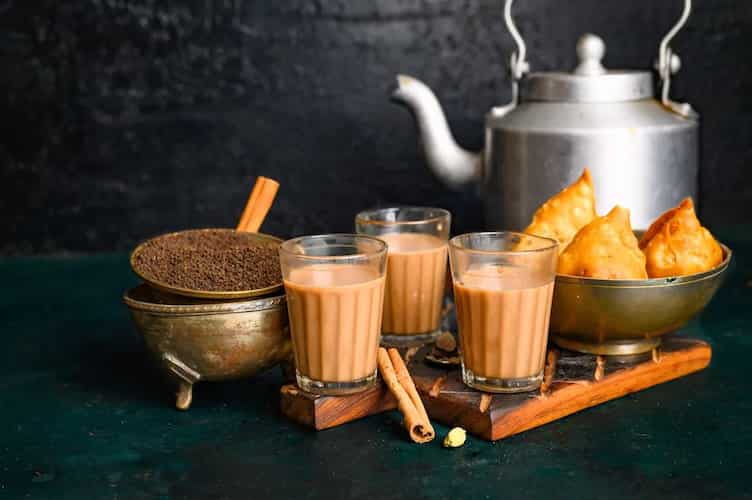 Interestingly, the credit for creating the country’s vast tea empire goes to the British who started tea cultivation in India. There are also many different legends surrounding this much-loved concoction. While some say that tea was discovered accidentally by a Buddhist monk on his way to China, another tale goes that when some tea leaves fell inside a Chinese emperor’s tea pot, he boiled them and discovered tea. Whoever it was, we can only be grateful that they did.

To each, his own

There’s a personal equation that one shares with their cup of tea. Different people prefer their teas in different ways – milky, no milk, sweetened with sugar, spiced up with herbs and spices, floral or even fruity. Once, when I served a cup of what I assumed was really sweet tea to a carpenter working at my place, he complained that it was bland. Only after two teaspoons of sugar were added that a small, satisfied smile spread on his face.

Apart from the most commonly-used black tea that most of us have seen being consumed at home, there are many other varieties of tea including white tea, oolong, herbal tea and green tea among others. My mother cannot understand the hype around green tea. “Kadvi lagti hai,” she complains, happy with her kadak masala chai with one teaspoon of sugar. As for me, one cup of ginger tea in the morning followed by an evening cuppa of masala chai with crushed black pepper, lemongrass, clove and cinnamon does the trick. The distinct aromas of individual spices being added to the bubbling water has a charm equivalent to a session of aromatherapy. When sleep plays hide and seek, a soothing cup of chamomile and lavender tea comes to the rescue at night.

Drink your tea, and eat it too

With an ingredient as dynamic as tea - with its many different varieties and flavours – is it a surprise that tea is used in cooking as well? From steeping tea and using it as an infusion to using it as a marinade for meats and veggies and even baking goodies with it - think Matcha cookies – teas such as black tea, oolong, white tea and green tea are increasingly being used for cooking purposes. One of the first times this writer tasted tea in a dish was at Burma Burma in Mumbai, the vegetarian restaurant that serves Burmese cuisine. Their Tea Leaf Salad known as Laphet Thoke in Burmese is made with pickled tea leaves, greens and crunchy nuts and left quite an impression on my mind. Many a dull, rainy evening has been uplifted by trying out recipes from Macaron Queen Pooja Dhingra’s books, with the all-time favourite being the Chai Cupcakes with Chai Buttercream Frosting.

Earlier this year, I attended Delhi-based Sidecar’s pop-up at Dashanzi at the JW Marriott Juhu and got a chance to taste some of mixologist Yangdup Lama’s beautiful tea-based cocktails including Measure of Substance and Agony of the Leaves. A native of Darjeeling, Lama enjoys incorporating tea in his cocktails, firstly because he is a tea-lover himself. His interactions with tea producers and planters has given him a fair bit of technical knowledge as well, which Lama believes is the key to making a good tea cocktail. “Balancing the characteristics of the spirit as well as tea is very important,” he says, explaining that while a spirit-forward cocktail with stronger flavours requires a full-bodied tea as well as spirit, for delicate flavours, he would go with lighter teas and spirits.

A walk around one of many gallis and nukkads of this vast country is bound to bring you face to face with tapris, chai cafes and small shops selling all varieties of tea. In the city of Mumbai alone, you can get yourself a cutting chai from one of the local tapris or indulge in a Darjeeling Muscatel or Lavender Earl Grey from one of the fancier cafes.

Snigdha Manchanda, who has been conducting chai walks in the city of Mumbai since 2014, takes the participants to places near Bombay Stock Exchange, Horniman Circle and Kala Ghoda. Within a radius of a few kilometres, she makes them spot chai wallahs selling everything from a Sulemani chai to Irani chai, regular kadak masala chai, pudina chai and more. One of the oldest tea stalls in the city, the 70-year-old Ashok Tea House in front of the Bombay Stock Exchange building has been in the family for three generations and enjoys a loyalty from its patrons who throng the tiny stall to exchange office gossip over steaming cups of chai. Their speciality pudina chai is made by adding crushed mint leaves to the tea once the flame has been turned off.

Not too bitter and with just the right minty freshness, this is a tea not to be missed. Located right opposite the main gate of the BSE, Manchanda adds that what makes this tea stall even more interesting is that it is built inside a small alcove on a wall and opens up like a cupboard. This little gem of a place certainly deserves a visit.

From the salty Kashmiri noon chai to the milky, sweet tea that you get on hill stations up North, to Lebu Cha (lemon chai) in the Eastern parts of the country, there is a tea for everyone. A soothing balm for the senses, your perfect cup of chai is like a warm hug from a dear friend. You don’t want it to end.