Sara gave her strict diet a break for her holiday, here’s a sneak peak of all the delish things and eateries that kept her hooked. Sara Ali Khan, who made headlines yet again with her appearance in the latest season of Koffee With Karan, is currently enjoying her holiday in her ‘favourite city’ - New York. On Monday, she posted a reel captioned, “My favourite things in my favourite city”, where she gave us a glimpse of the first 24 hours she spent in the city. The reel captured some popular eateries, hidden gems, subway rides and more.

Sara was studying at Columbia University in New York before making her Bollywood debut, which explains the bias. Given Sara travels so much, hardly has she been so excited to capture the essence of the city for her fans. Being a thorough foodie, she was also indulging to her heart’s content in the Big Apple. From best pizzas to prawns stir-fry, Sara gave her strict diet a break for her holiday, here’s a sneak peak of all the delish things and eateries that kept her hooked

Coffee: Sara loves her coffee and there are no two doubts about it. In her reel, she gave us a glimpse of her ‘first coffee; she had in the city, which looked like a cold brew.

Pretzels: New York is famous for its vivid street food fare, and what we especially love are the food vans that sell pocket-friendly snacks like hotdogs, pizzas and pretzels. In her reel, Sara can be seen next to a pretzel van. Pretzel, for the uninitiated, is a baked good made with soft dough, shaped as a knot. It is served hot and fresh with or without toppings. 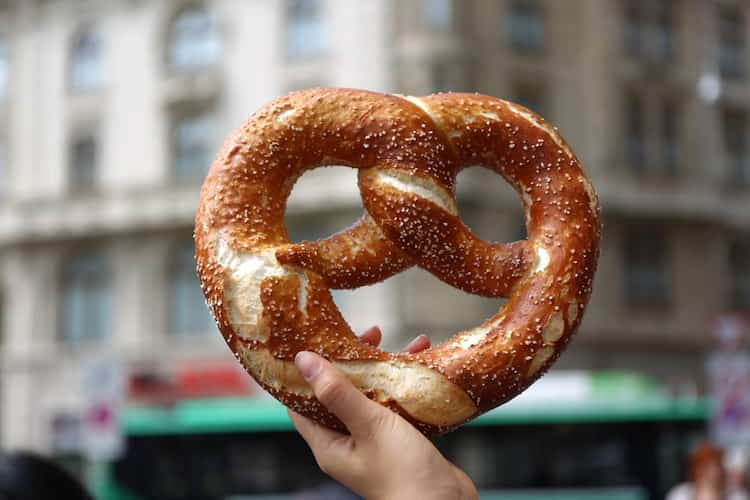 Pizza: Sara ate the “best pizza in the world” at the Mamo restaurant and all we could do was envy. The wood-fired pizza was topped with creamy cheese and generous amounts of shaved truffle. Drooling much? Pasta: With her pizza so creamy, Sara decided to go with a tangier pasta. Her red sauce pasta cooked in perfect, tomato-based sauce, topped with parmesan cheese

Lasagna: She didn’t just stop at the pasta, she also called for the most sauce, and loaded Lasagna. Lasagna is an Italian dish made with pasta sheets, which is layered with sauces, veggies and cheese.

Additionally, she also visited Laduree at Soho, Laduree is a popular French bakery that now has branches all over the globe. Given Sara’s sweet tooth, we wonder what among the croissants, macaroons and tea cakes caught her fancy.

Trending: Karan Johar Validates Farah Khan’s Request For Free Nachos At An NYC Restaurant; Do You?