The Holy Land is home to some great restaurants and bars, all of which serve a taste of the local cuisine, including drinks. Along with being the meeting point for some of the world’s major religions and having that to show in the form of religious heritage, Israel also has a thriving food and drinks scene. The Holy Land is home to some great restaurants and bars, all of which serve a taste of the local cuisine, including drinks. We recommend five Israeli drinks to try.

Originating from Lebanon, arak is a potent liquor that is served at most bars in Israel. It is a distilled alcoholic drink which means ‘perspiration’ in Arabic. Arak reached Israel with immigrants from other Middle Eastern and North African countries. Both grapes and aniseed are used to make the liquor. When it’s time to drink, arak is mixed with water in the ratio 1:2. The diluted mixture, which turns a translucent milky-white, is then poured into cups filled with ice and served.

The word ‘limonana’ combines the Hebrew words for lemon and mint. The drink is kind of slushy—a mix of crushed ice, lemonade and mint leaves (sugar syrup may be added for taste). It is found at nearly every restaurant and cafe in Israel, and is cooling and refreshing, making it the summer drink of choice for Israelis. Alcoholic versions of limonana that use arak, tequila, whiskey and gin are also available. Limonana is the ideal accompaniment to a traditional Israeli meal of salads and dips.

Ice cafe is Israel’s answer to cold coffee. Much like a coffee-flavoured slushy, an ice cafe is made with instant coffee, milk, ice and a sweetener. Some people prefer to use milk ice cubes to make the drink. It is different from American iced coffee, which is made by blending shots of espresso with milk and ice cubes. Popular Israeli coffee chains like Aroma are known for their ice cafes, which make rejuvenating drinks for when the sun is blazing in Jerusalem or Tel Aviv. 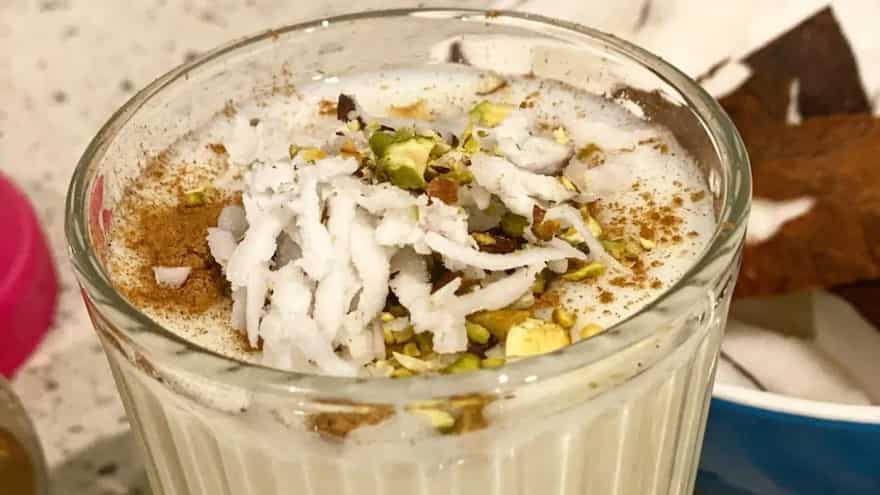 Also known as salep, sahlab, and saloop, sachlav doesn’t quite fall into the category of either food or drink. It is a thick, milky drink that is usually served as a winter warmer (it’s hot), topped with shredded coconut, chopped pistachios and raisins. To make the drink, dried sahlab orchid bulbs are ground and mixed with hot milk, vanilla, cinnamon and orange blossom water. Sachlav originated in Turkey and can be found in other Middle Eastern countries, too. In Israel, find it at the Mahane Yeduha Market in Jerusalem or the Shuk HaCarmel in Tel Aviv.

In Hebrew, ‘shoko b’sakit’ translates to ‘chocolate milk in a bag’. Also called Shoko, Shoko b’sakit is a commercially produced Israeli chocolate milk. The chocolate milk comes packaged in bags (similar to some juices), and is popular for its packaging. The packaging doesn’t include a straw and the bag is meant to be torn off at a corner, so that the milk can be poured straight into your mouth. Children especially love the drink, but it is equally a favourite with adults.

Salatim: The Israeli Tradition Of Serving Salads Before Meal