Ashok Vaidya is credited with inventing the rustic and delectable vada pav. Vada pav is a spicy and tangy snack that hails from Mumbai. The batata vada is stuffed inside a pav (bun) with some green chillies and masala. Pav is a squarish, raised flatbread that goes well with sabzi, keema, vada, and chutney. The Portuguese are believed to have introduced the concept of baking bread during the colonial period in Goa. They sought to combine their European preferences with Indian tadka as best they could. Ashok Vaidya is credited with inventing the rustic and delectable vada pav. In the 1960s, Balasaheb Thackeray encouraged Maharashtrians to follow in the footsteps of South Indians who had established Udupi restaurants. This prompted Vaidya to set up a stall outside Dadar Station in 1966, where hundreds of thousands of employees passed every day on their way to textile factories in suburban regions like Parel and Worli. He began selling vada and poha alongside an omelette pav shop. He once tried putting a vada between two pavs, along with some chutney, to give it more taste. The result of the experiment—vada pav—became an instant hit in no time.

During the 1970s and 1980s, there were frequent strikes that resulted in the closure of many textile mills. As a result of the Shiv Sena's support, several former mill workers launched their own vada pav stalls. Vada pav's popularity skyrocketed quickly. It became popular among the working class as a go-to snack. It was simple to prepare, inexpensive, and easy to serve. Vada pav is a classic snack that goes well with chai or shikanji. The spicy and tangy flavour of batata vada is well balanced by the pav. 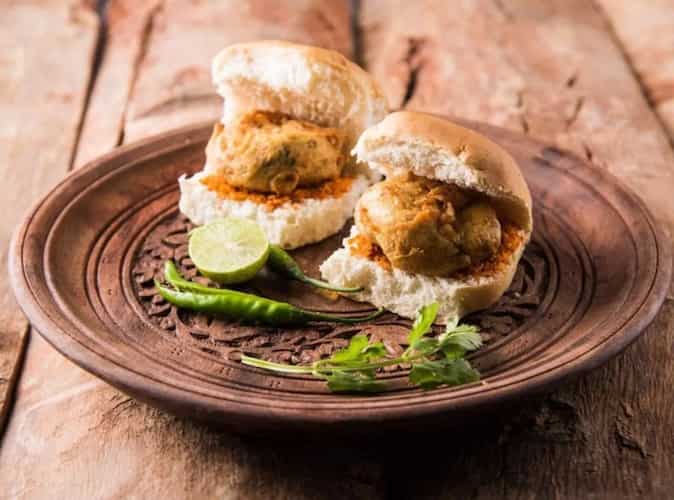 Vada pav is synonymous with Mumbai but if you are craving a mouthwatering authentic vada pav, here is a list of restaurants in Delhi that serve the best vada pav:

Goli Vada Pav No.1 has a wide variety of vada pavs to tempt customers. They have everything from sabudana vada pav to schezwan vada pav. At barely Rs 50, you may satisfy your Delhi taste buds with a Mumbai street favourite.

The Maharashtra stall serves a wide range of Maharashtrian foods, as well as the popular vada pav. The batata vada is as real as it gets, except instead of pavs, the stall uses bread buns. Two vada pavs are served on each plate, and the pricing is also extremely fair. Fried chillies, garlic chutney, and dry peanut masala are served alongside.

Are you craving vada pav, batata vada, or misal pav from Mumbai? All of these are available at Johny's Vada Pav in Delhi. Their unique selling point is that they also make sabudana vada. All of the dishes are freshly prepared and served at a reasonable price. Kanda bhajia and matar poha, both popular in Mumbai, are also served here.

Chicken Inside Vada Pav: Will This Recipe Rock?

4 Best Places To Have Vada Pav In Delhi