According to some sources, the recipe for mashed potatoes originated in 1771, when a Frenchman named Antoine Parmentier organized a competition on how to make potatoes. Mashed potato with garlic herbs is a fantastic way of eating your favorite potato that’s not even fried. The best homemade comfort food side dish is garlic and herb mashed potatoes! It's made with buttery Yukon gold potatoes/Russet/Idaho, garlic-infused ghee or heavy cream, and a generous handful of fresh herbs. It's savoury, creamy, and absolutely delicious.

A brief history of mashed potatoes

Of all the Indian populations in America who consumed potatoes, the Incas preferred theirs mashed. According to some sources, the recipe for mashed potatoes originated in 1771, when a Frenchman named Antoine Parmentier organized a competition on how to make potatoes. Alternatively, some sources claim that mashed potatoes and gravy were created by the English in the 1600s. Throughout the world, the tuber is used in dishes and beverages, in everything from potato chips to French fries to vodka and, of course, mashed potatoes.

2 pounds of starchy potatoes (like Russet, Idaho, or Yukon gold), clean and unpeeled

Thyme and rosemary to taste

Salt and pepper to taste 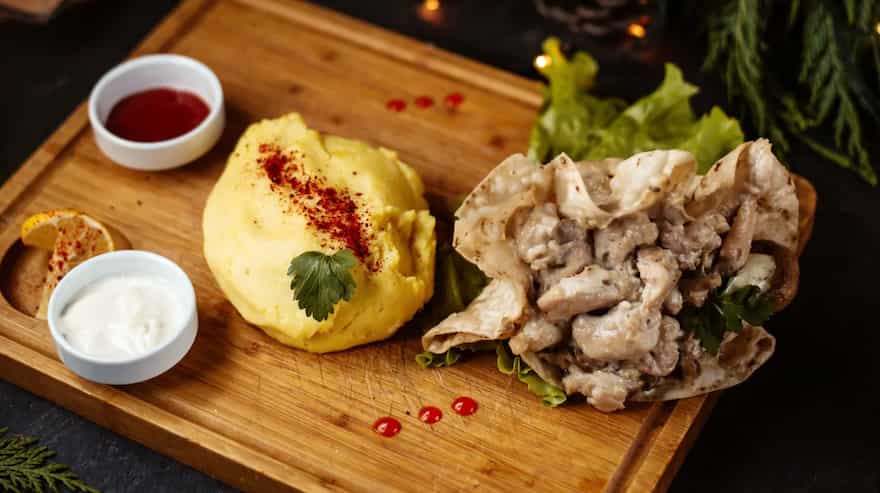 1. Wash and place potatoes in a medium to a large-sized pot and add cold water until they're fully covered. You can add salt at this point if you like.

2. Turn the heat to high, cover the pot, and cook until the water boils. Reduce the heat to a simmer, and cook for another 15 to 20 minutes. You can test if potatoes are cooked by poking a large piece with a fork or knife. If they are cooked, they should go in easily. Unless they are done cooking, then let potatoes cook for a few minutes longer.

3. Put the potatoes in a large pot with cold water and salt. Bring to a simmer, cover, and cook for 25-30 minutes (until well done). In the same pot, drain the water from the potatoes, then put them back on the stove. Turn on the burner very low and let all or most of the water evaporate.

4. At this point, you should not walk away from the pot. Peel the potatoes; leave some skin on for a more old-world flavour and texture. Be sure to stir the potatoes constantly in case too much water evaporates or if they sit at the bottom of the pot for an extended period of time.

5. Stir well to create a soft and creamy pureé. Meanwhile, you can also add the butter and cream together in a separate pan on low just long enough to melt the butter. Then add garlic, thyme, rosemary, and nutmeg seasoning to the pot used to boil the potatoes.

6. Stir and heat over low until the butter has melted and the puree is hot. Once the potatoes have evaporated all the water, mash them with a hand masher.

7. Add the melted butter and cream mixture once the potatoes are mashed to the perfect consistency.