Treat your taste buds to these delectable delights this Republic day.

Celebrate the joyous occasion with the union of flavours and colours. From Tricolour Menu to India On a Platter there in a array of such interesting dishes that are being offered. Keeping up with the spirit of the day foodies are surely in for a treat with such specials. It’s not just the mind and spirit getting the feeling of patriotism but why not bring the same on the plate this Republic Day.

Chef Keshav Yadav of Pumphouse shares these exclusive recipes for R-day. Drop by to try these treats. 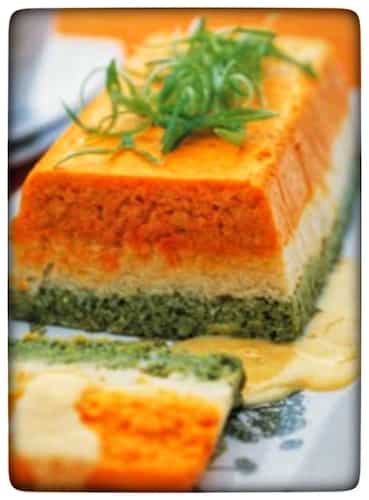 Chef says “Let’s face it, everyone is short on time nowadays! “Make ahead” dishes are a boon in the modern kitchen and this where my Tri Veg Terrine hits the right spots and reminds us of our awe inspiring Tiranga Flag. It can be made a day or two ahead and kept in the fridge to set. It works great as a special starter, part of a buffet or even as an after-school snack this Republic Day! Go ahead try it out today.

•    Boil a big pot of salted water. Cook the cauliflower for 3-4 min, then transfer them in cold water.

•    Prepare the carrots the same way by cooking them a little longer.

•    Then in turn spin the cooked vegetables in a spin salad dryer to release as much water as possible.

•    Puree these vegetables separately, then sieve to release even more water.

•    Butter the mould, pour the broccoli stuffing at the bottom of the terrine, without touching the edges, very delicately place on top the cauliflower stuffing.

•    Smooth the surface carefully and cover with the carrot stuffing.

•    Serve however in shape you want. Chef Keshav adds “This is a great, fresh dessert to create any time of year! Super easy, seriously impressive and totally Instagramable. Succulent and sweet, the tartness of the fruits add so much fresh flavour and the trio of colours - Saffron, White and Green are reminiscent of the Indian flag… this dessert is so much more versatile than you'd think.

For the first layer

•    Blend the chopped kiwis and mint along with 1 cup of water in a blender.

•    Transfer to a heavy – bottomed saucepan and place over medium – high heat.

•    Add the gelatine – water mixture to the boiling kiwi mixture and cook for 2-3 min.

•    Pour it into a mould, let the hot mixture cool a bit before placing it in the refrigerator to set.

For the second layer

•    Blend the litchi fruit along with 2 cups of water in a blender.

•    Strain the mix through a muslin cloth.

•    Heat the mixture with 2 tbsp sugar in a saucepan over low heat. In a bowl mix 1 tsp of gelatine with 1 tbsp of chilled water and mix.

•    Add the gelatine – water mixture to the boiling litchi puree and cook for 2-3 min.

•    Take out the mould from the fridge and add the litchi mixture as the second layer.

For the Third layer

•    In a saucepan add 2 tbsp sugar, orange zest, 1 cup of orange juice and bring the mixture to a boil.

•    Using a colander strain the orange juice to remove the zest.

•    Transfer the strained juice back into the saucepan.

•    Add the gelatin mix to the orange juice and place it over medium heat.

•    Take off heat and cool a bit before adding it as the third layer in the mould.

•    Once it set, serve with dollop of cream or quenelle of cream or any other garnishes.

Lets’ Celebrate The Tricolour With Some Awesome Food