Check Out The Best Mutton Dishes In India

The dish is an integral part of the wazwan, a meat-based multicourse menu that is the foundation of Kashmiri cuisine. The dish is characterized by the use of an extensive range of spices, from ratanjot to saffron, which are tempered in ghee, after which the same is used to slow cook the mutton or lamb. It would be blasphemous not to include Rogan Josh in this list. This legendary Kashmiri dish is one of the most important preparations in the country’s cuisine. Trying this dish for the first time is nothing short of a religious experience. From the thick layer of fat that floats on top of the plate, laden with spices, to the fall of the boned lamb that lies below it, this northern staple is sure to impress the most discerning foodies. The dish is an integral part of the wazwan, a meat-based multicourse menu that is the foundation of Kashmiri cuisine. The dish is characterized by the use of an extensive range of spices, from ratanjot to saffron, which are tempered in ghee, after which the same is used to slow cook the mutton or lamb. The gravy also features the addition of rich, full-fat yogurt, which further enriches the layer of fat that adorns the preparation and tenderizes the meat used for the same. Rogan Josh is best paired with tandoori naan or steamed rice.

For the next item on this list, we journey to the south Indian state of Andhra Pradesh, a land long renowned for its Mughlai cuisine. However, this preparation is the furthest thing from Mughlai fare and is closer in resemblance to traditional Telugu cuisine. Most families that live in the state have their own familial recipe for the dish, which can vary dramatically depending on the region in consideration. However, two things remain the same regardless of where you go: an inhuman level of spice, and the extensive use of gongura leaves. The leaves impart a distinct sour taste to the dish. Both the red and green-stemmed varieties of the plant are used for the dish, with the former being more sour to taste. The dish is typically made using lamb, which is boiled and then coated in a simple wet masala that consists of traditional spices and flavorants such as Guntur chilies, curry leaves, cardamom, etc. before being fried in a combination of both ghee and refined oil, a commonplace in most Andhra households. The preparation may feature the use of a red or green spice mix and may be prepared in any consistency, ranging from a gravy to a wet masala. This dish is almost exclusively eaten with rice. 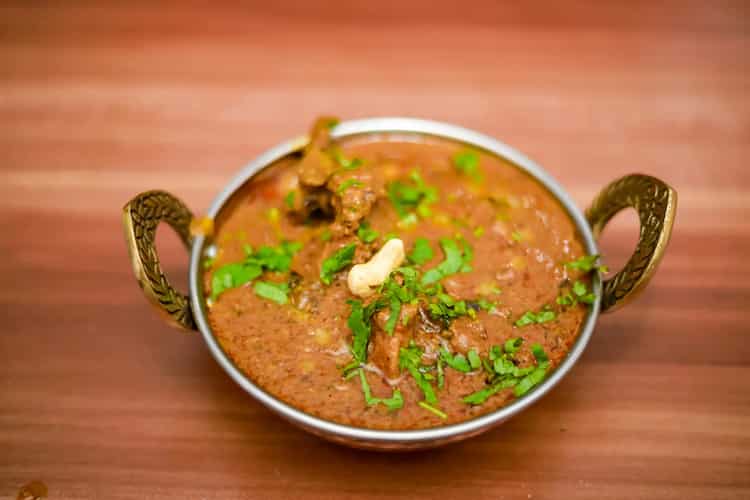 Yet another southern classic, this simple coconut-based gravy is incredibly easy to prepare and indispensable to Malayo-Christian cuisine. The dish is prepared using bite-sized pieces of boneless lamb or mutton that are stir-fried in coconut oil with mild spices like cinnamon, cardamom, and black pepper and cooked with coconut milk. This gravy is thin yet incredibly rich, with pronounced notes of cardamom, ginger, and black pepper. The dish is usually made on Sundays after church. It is also an important part of religious traditions in the state, especially during Lent and Holy Week.

This spicy Rajasthani staple is the crown jewel of the state's cuisine, and you'd be hard pressed to find a Rajput worth his salt that doesn't know how to prepare the dish. The dish may be prepared with mutton, lamb, or even game such as deer or wild boar (lamb is the preferred choice of meat). The dish makes use of a range of traditional spices, such as the famed mathania chilies and kachri powder. The meat of choice is cooked in a mixture of mustard oil and ghee for flavor, and the dish may feature the use of a small bowl filled with ghee and charcoal on top of it in order to impart a smoky flavor. This dish is usually made as a gravy, although it is not uncommon to see it served semi-dry as a side. The dish is almost exclusively eaten with whole-grain rotis—bajra in the winter and wheat in the summer.

Check Out The Best Sushi Restaurants In India

Pepe Ghonto, The Bengali Dish To Make Best Out Of Raw Papaya

Fish Curries Of India: 5 Best Fish Dishes From Across The Nation

Check Out These Tasty Dishes That Use Yogurt

Mutton Pulao: The Best Kept Secret Of The Kayastha Kitchen