Energy was high at India's biggest food and music festival. Banging beats, great vibes and epic food – these were all available in plenty at the HT City Unwind Festival over the weekend. The 3-day event at Jawaharlal Nehru Stadium began on 7th October and saw some of India’s most famed musicians, chefs and Bollywood stars in the same spot to party the weekend away. And even though the rain decided to make an appearance too, nothing could dampen the spirits of the event.

In collaboration with HT Cityfoodies — HT City’s dedicated food handle on Instagram — HT  City Unwind hosted over 100 food stalls set up by the best restaurants in Delhi and the Slurrp Masterchef Cookout Zone hosted 9 of the country’s top celebrity chefs. Here, home chefs got to meet their favourite master chefs, watch them create some signature dishes and some lucky contest winners even got to cook alongside them. 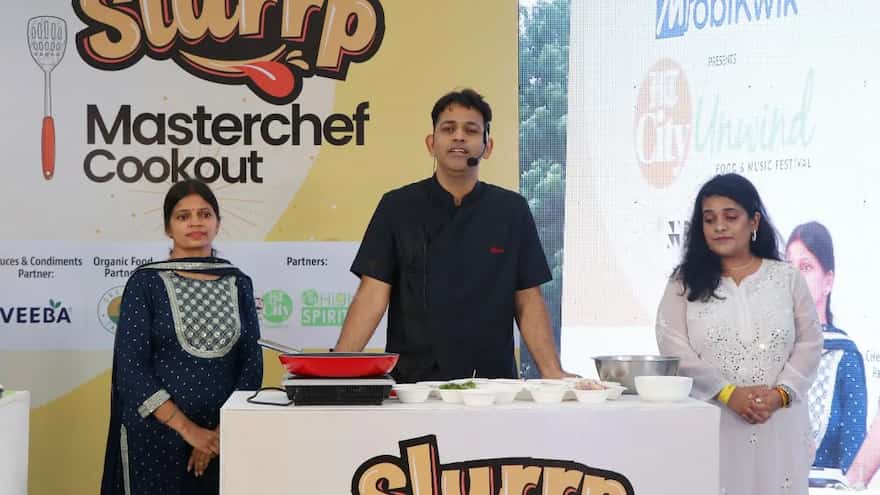 Day 1 started off with a bang as Chef Vaibhav Bhargava opened the show with Warm Crispy Eggplant a Vietnamese-inspired dish with a sweet caramel glaze. Along with him, contest winners Parul and Nishtha joined him on stage to create a dish that made the crowd rethink the potential of this humble ingredient. “It was a wonderful experience one with an engaging audience. I loved the vibe, their curiosity and their zeal more.” Chef Nishant Choubey then took the stage to whip up out-of-the-box olive recipes like Olive Gol Gappe and Olive Bonda. The crowd all had a taste and declared it a triumph of fusion cooking. He had clearly been infected by the magic of HT Unwind as he broke into a dance number with the audience quickly joining him on stage to party. The first day was closed out by Masterchef India judge and all-round culinary superstar, Chef Kunal Kapur who took the audience through his recipe for the Sindhi classic Aloo Tuk. Home chefs Neeru Goyal and Sonia were super sous chefs, helping Chef Kapur as he shared his knowledge and experiences in the world of food. “My introduction to cooking came from my ma and my masi,” said Kapur to the crowd, “I have learned so much from home chefs." After his session, he shared his experience saying, "Events like these help us to unwind, connect with new people and reconnect with old friends and family and it goes to show that the city can be more beautiful when everybody comes together for good food and good music." Later the crowd was wowed by a spectacular performance by Sunanda Sharma and later in the evening, Nucleya took the stage to crank out some iconic tunes and pump up the energy in a high-octane finish to Day 1.

Saturday brought with it some gloomy weather, but no amount of rain could slow down the superstar chefs at the Masterchef Slurrp Zone who took on the adverse conditions in style. The Slurrp community gathered together in a tent off the main stage to watch Chef Tarun Sibal put together a gourmet twist on an underrated vegetable with his Pumpkin Ghee Podi with Chilli Scallion Parotta. “I don’t think about cuisines,” says Chef Sibal, “I think about the flavours and how they work together.” Chef Noah Barnes brought the crowd a taste of Mexico with, Guacamole, Refried Bean Salsa and Chicken Quesadilla. Simple, classic flavours with his own personal touch. "What is not there to love about this day, just look around. It is pouring and still packed," he said, "And this recipe is so easy, you can keep experimenting." Over on the music stage, the crowd went wild for the Punjabi superstar Jass Manak and his desi beats. The event got an extra dose of glamour as Taapsee Pannu took the stage for a live interview. She indulged in some Golgappe but shared her thoughts on the Pani-puri/Golgappe divide with the audience saying “Bombay mein golgappe nahin khati main (I don’t eat these in Mumbai). Ek toh Bombay me pani puri hoti hain, golgappe nahi hotein. Woh khane layak nahi hain, mere hisab se,”

Day 3 brought with it a renewed vigour and people brought their Sunday energy with them to the final day of the event. A star-studded line-up awaited them at the Masterchef Cookout Zone where the sessions kicked off with Michelin plate winner, Chef Dayashankar Sharma was joined by contest winners Meena Parajuli and Asha and together they taught the crowd about his take on the British classic of fish and chips. The Goan Stuffed Grilled Fish featured tilapia fillets stuffed with a mango coconut blend and grilled with coriander pesto. A beautiful meeting point between a western standard and complex Indian flavours. Chef Sabyasachi Gorai, better known as Chef Saby – a recipient of the President of India's award for Best Chef – then treated the audience of home cooks to his special Suya Chicken Kebabs which were passed around to unanimous approval. He then shared a tray of delicious eggless, ragi flour brownies, which had people coming back for seconds. 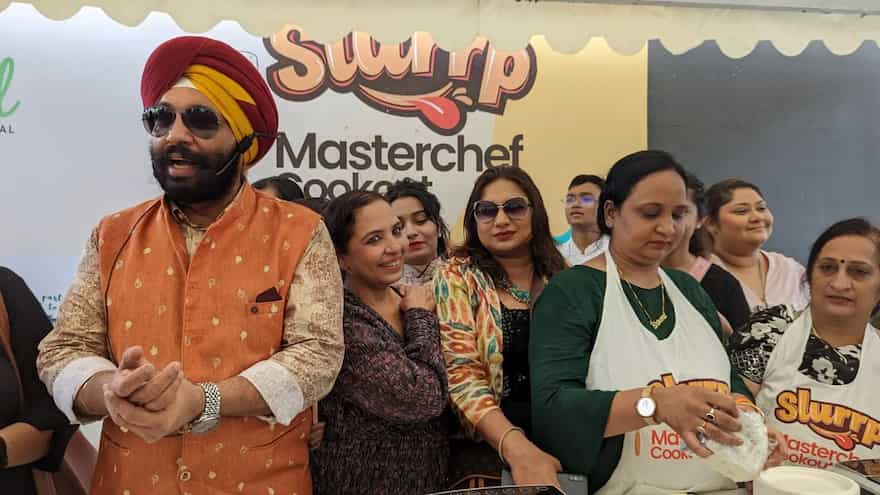 The Dancing Chef of India was up next as Chef Harpal Singh Sokhi began his session, entertaining and teaching in equal measure. He along with contest winners Neena Seth Pandey and Bhavna Verma whipped up a delectable Multigrain Barfi which proved that healthy treats can be easily made, even at home. Up next, chef to the stars, Varun Inamdar stopped by to share some of his secrets with a Walnut Taco and a super-quick and easy Walnut Cake that can be made on the stovetop. “I want to create recipes that take interesting flavours but make them simple to cook,” said Chef Inamdar. On stage contest winners Nitu Indu Sharma and Neha were there to help him bring his recipe to life. To round out the masterclasses on the Slurrp stage, Chef Nishant Choubey returned to cook, laugh and dance as he made a Pasta Salumeria and a Penne Caponata. “In all delights and happiness I thoroughly enjoyed sharing my improvised recipes with the guests at the Slurpp Masterchef Zone,” he said, “It was an ecstatic and ever-memorable time! Looking forward to many more!”

Though the magical moments at the Masterchef Zone were over, the crowd was still in high spirits as they rocked along with rapper-extraordinaire Yo Yo Honey Singh. This 3-day extravaganza closed on a high note with fans of food and music alike coming together to celebrate the joy of eating, dancing and living life to the fullest at HT City Unwind.

Slurrp Exclusive: In Conversation With Chef Varun Inamdar, His Love For Chocolates, Comfort Food, Upcoming Projects And A Quick Recipe!

Chef Noah Barnes On His Love For Mexican Food