Beyond Bhaang: Five Colourful Cocktails To Try This Holi

If you’ve been drinking bhaang for Holi every year and are looking for a different way to get inebriated, try these five brightly-coloured cocktails this time. Holi day is usually a blur, with colour in the air and bhaang in people’s systems. Being associated with Lord Shiva, bhaang has been a favourite with people who celebrate Holi for years. The high that comes with consuming bhaang makes Holi what it is, along with the special snacks that each household prepares. However, if you’ve been drinking bhaang for Holi every year and are looking for a different way to get inebriated, try these five brightly-coloured cocktails this time (drink them instead of bhaang at your Holi party or during the evening when the coloured dust has settled):

Sangria can be traced back to 200 B.C. It became popular in Europe over a century later, when Europeans began to use French Bordeaux as the base. Later, fruits and brandy were added to red wine to give it more flavour and strength. Sangria reached the US during the 1964 World's Fair, which was held in New York. Since then, it has become a popular punch for summer parties and picnics. Make a pitcher of sangria for Holi, to add some scarlet to your drinks menu.

An American engineer named Cox, who lived in Cuba, has been credited with the invention of the daiquiri, after he ran out of gin while hosting a cocktail party. A bright pink cocktail that uses rum, the strawberry daiquiri is a classic. Strawberry daiquiris may be frozen or shaken; the former uses crushed ice and makes the ideal summer drink. They can be made with fresh strawberries, a bit of lime juice, rum and sugar syrup. 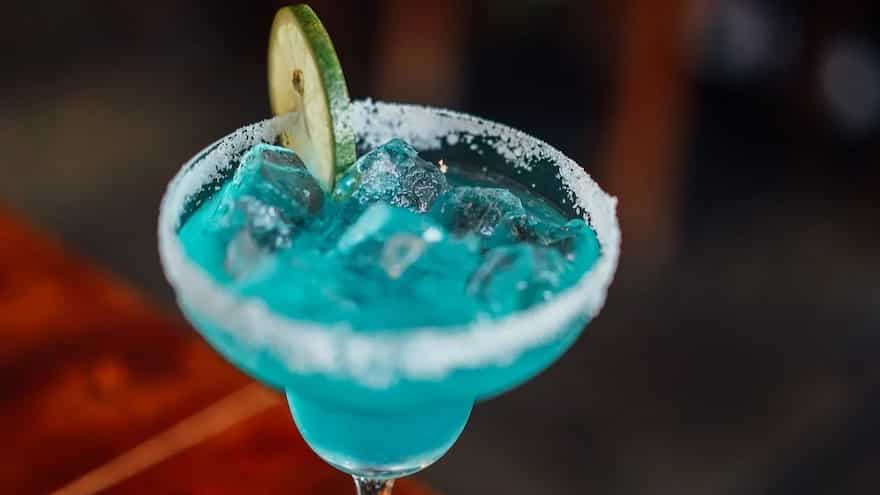 Legend has it that a bartender named Santos Cruz concocted the margarita for the singer Peggy Margaret Lee in 1948, naming the drink after her name’s Spanish version. The classic version of the refreshing, popular summer cocktail uses tequila, triple sec, Cointreau, lime juice and sugar syrup. Cointreau may be replaced with blue curacao to give the drink a brilliant blue colour, making it the perfect drink to celebrate Holi with.

An ombre drink with bright red and orange, the tequila sunrise was created at the Trident bar in Sausalito, California, in the 1970s. Bobby Lozoff and Billy Rice have been credited with the invention of the cocktail, which gained popularity after Mick Jagger tried it at a party that was held to kick off The Rolling Stones’ 1972 tour. It mainly uses tequila, orange juice and grenadine. The latter two are poured so as to form an ombre effect within the glass.

In the 19th century, British officers drank the gimlet to prevent scurvy, a disease caused by the deficiency of Vitamin C. The lime juice used in the gimlet provided the sought-after nutrient. It is believed that Rear-Admiral Sir Thomas Desmond Gimlette inspired the name of the cocktail when he made it for his shipmates as a way to mask the bitter taste of gin. The cucumber version attains a fresh green colour, which is caused by the colour that comes from the juice that is released after the muddling of cucumber slices.

Holi Recipes: Mango Thandai Or Strawberry-Chia Lassi, Which Fruity Drink Will You Add To Your Menu