India is Baingan’s home turf, and many delicious regional dishes are prepared using the Brinjal Brinjal is the king of vegetables; this is what we learned in school. A big, round and purple vegetable with a crown-shaped stem on its head makes it an attractive vegetable; its delicious taste justifies its colloquial title, the ‘King of Vegetables’.

Baingan is the Hindi name; however, it’s also called Eggplant and Aubergine in different parts of the western world. Its culinary usage makes it an indispensable part of many cuisines. India is Baingan’s home turf, and many delicious regional dishes are prepared using the Brinjal.

One of the most popular dishes of Baingan is the ‘bharta’. The big and round brinjals are roasted over direct fire, often with garlic stubbed inside it for its flavour to seep right through. The outer layer of brinjal is peeled off and discarded, and the fleshy roasted brinjal is mashed to prepare ‘Baingan Ka Bharta’.

Dhabas in North India, especially on the highways of Punjab, are an ideal place for you to try this delicacy. Onion and tomatoes are sauteed with chillies and ground spices to lend it its sweet and spicy taste. Chopped coriander leaves are its ideal garnish, and soft and fluffy Tawa rotis are its perfect accompaniment.

‘Baghar’ means to temper, and this nawabi dish made with small brinjals is one of my favourite vegetarian dishes. Baghar-e-baingan is known for its creamy, nutty flavour from roasted peanuts, sesame seeds, and coconut paste. An onion-based gravy is prepared using the paste, and shallow fried brinjals are added. The final touch of curry leaves and mustard seed tempering adds a delectable flavour, resulting in an irresistible dish. 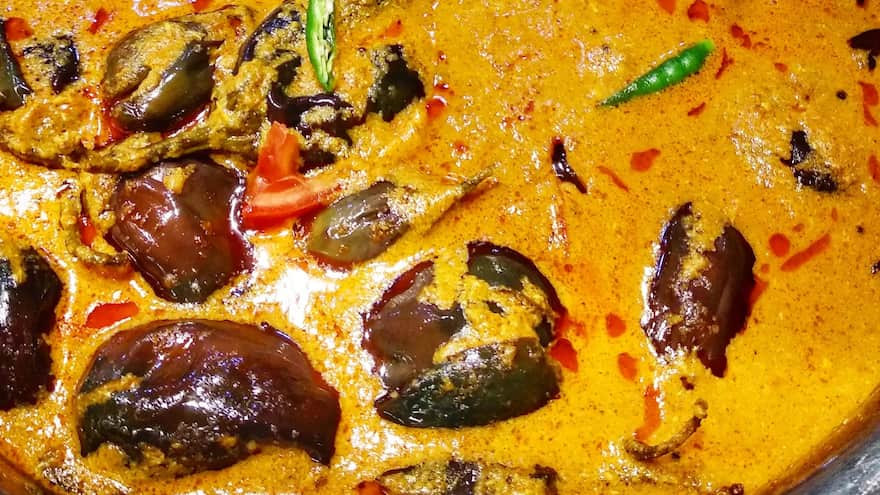 ‘Gutti Venkaya’ is another brinjal dish from the Andhra region, using an almost similar recipe. However, it is undoubtedly a spicier version that Andhra cuisine is known for producing. Vankaya Pachadi (Brinjal Chutney) is a spicy and flavourful condiment from the region and is enjoyed in rice or chapatis.

The fine Kashmiri cuisine uses baingan in this exquisite recipe called the ‘Khatte Baingan’. Small brinjals are cooked using the shallow fried method and doused in sour tomato-based gravy. Tamarind is used to amp up the tangy flavour. Mustard oil is a perfect base for this preparation's array of flavourful Kashmiri spices. Fennel, Dry Ginger, Cumin, Coriander, Cinnamon, Cardamom, Kashmiri red chillies and the fragrant Hing (Asafoetida) give this dish the quintessential Kashmiri flavour. Kashmiri cuisine is often misunderstood as predominantly for non-vegetarians. However, it’s far from true. Outstanding vegetables like Baingan are one among many vegetables used in Kashmiri cuisine. ‘Khatte Baingan’ is an acceptable testimony to the prowess of Kashmir’s vegetarian cuisine and the might of ‘Baingan’, which finds its way into most cuisines of India.

Being one of my family’s favourite dishes, I am biased towards this spicy chatpati dry-fry preparation using small brinjals. Dry spices are stir-fried in a generous amount of oil, in which small cuts of brinjals are added to make a spicy and delicious ‘Patiala Baingan’. This preparation uses a mix of fennel, cumin, Nigella, caraway, and coriander seeds. A bit of garam masala, chat masala, or Amchoor may leave its delectable flavour to this preparation. Adding a small amount of onion may be optional; however, when you finish cooking this dish, add a few thinly sliced roundels of tomatoes, and cover the pan with a lid for the tomatoes to wilt in the heat. The result is simply fantastic!

The outstanding Bengali cuisine uses brinjal beautifully, and the testimony to this claim is the ‘Begun Bhaja’. Indeed, excellent usage of brinjals can be seen in this shallow fried baingan dish. Big and round brinjals are cut into disk-shaped roundels and marinated with minimal spices; however, do not miss out on Turmeric, chilly red powder, and a bit of salt and sugar for seasoning. Shallow frying it in Mustard oil makes the marinated brinjals into this golden fried brinjal delicacy. ‘Begun bhaja’ truly highlights the vegetable's flavour, which is why it is an ideal dish to mention when we discuss the culinary usage of ‘Baingan’ in Indian cuisines. ‘Begun Bhaja’ makes for a perfect accompaniment to a vegetarian Bengali spread.

‘Baingan’ is used in Bihar’s staple dish, ‘Chokha’, an accompaniment to the star dish, ‘Litti’. ‘Vangi Bhat’, a Maharashtrian rice and brinjal preparation, is a popular dish. In Odisha, ‘Baingan’ is cooked with yoghurt to prepare ‘Dahi Baingana’. In Gujarat, ‘Baingan’ is loved for its usage in the ‘Ringan Nu Shaak’ dish. 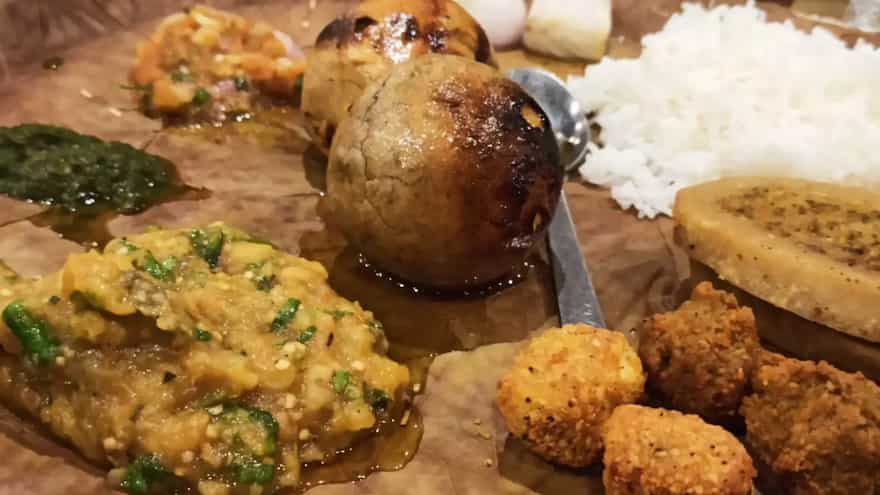 Litti is eaten in Bihar with baingan ka chokha

‘Vazhuthanagha Curry’ is the brinjal curry from Kerala, ‘Baddanekai Yennegai Gojju’ is a stuffed brinjal preparation in Karnataka, and not to forget, the simple and delicious ‘Aloo-baingan’ is cooked regularly in North Indian households, and is much loved across India for its simplicity and lightness. ‘Bharwaan Baingan’ (Stuffed Baingan) is another common way of preparing Brinjals in India.

Aubergines are used in many traditional international dishes. ‘Babaghanoush’, a mashed Aubergine preparation from Turkish-Middle eastern cuisine, is one of the classic examples of Aubergine’s global appeal. Babaghanoush is an inevitable dish on the Mediterranean menu in restaurants worldwide.

‘Khoresh Badamjan’; a Persian eggplant stew, ‘Borani Banjan’ of Afghanistan, ‘Mousakka’ is a fantastic eggplant and meat dish from the middle east, ‘Rollatini’ from Italy, and the classic dish from the French cuisine ‘Ratotiulle’, is a classic case of the beautiful usage of Aubergines or Eggplants, in the international cuisines.

Eggplant, thus, is a versatile and low-calorie vegetable celebrated for its many culinary usages worldwide. In India, ‘Baingan’ (Aubergines) is one of the most used vegetables. Fantastic recipes using ‘baingan’ are spread across the length and breadth of India and the rest of the world.

Being one of my favourite vegetables, and the happiness I have experienced enjoying it over the years in many recipes, I bow down in respect to the King of vegetables, Baingan.

Not Your Regular Brinjal Masala

Badanekayi Gojju: Brinjal In A Sour And Sweet Avatar

Spicy And Tasty Brinjal Curry: Perfect With Rice And Chapatis