Hummus or baba ganoush? You cannot go wrong, no matter what you decide. Each appetiser is scrumptious and nutritious. Both have their roots in the Mediterranean and have extended globally. Both are substantial, creamy, and rich. Baba ganoush and hummus are excellent examples of the robust, healthful flavours that are characteristic of Mediterranean cuisine.

They are great for dipping bread and pita pockets, but their texture always seems to perplex us. These two vegetarian sides from the Mediterranean region are perfect before a meal and are also just tasty. Hummus and baba ganoush are the dips that are frequently mistaken for one another, which are nearly identical. However, these two outstanding dips are very distinct from one another that you should try while enjoying happy hour.

Baba ganoush and hummus employ different ingredients, which is their main distinction. Unlike hummus, which contains chickpeas, baba ganoush is made with eggplant. Even though they appear similar when placed side by side, the flavours are what really determine which dip you are eating. Try both of these fantastic Mediterranean dishes. Baba ganoush is for you if you enjoy eggplant, whereas hummus is better if you prefer the flavour of chickpeas.

This Arabic delicacy has eggplant, which absorbs the smoky, tasty flavour of the roasting process. Eggplant is roasted and mashed to make the dip known as baba ganoush. Then combined with Olive oil and roasted eggplant, tahini, lemon juice, garlic, and salt are typically included as well. Other ingredients vary depending on the culture creating the cuisine. Arabic for "baba ganoush" is "pampered father," however whether that refers to the eggplant or the eater is always a point of discussion. Eggplant has a mild flavour and absorbs the flavours of the foods it is paired with. Some individuals don't like its distinctive texture and slight astringency, while others adore it. One of the staples of Mediterranean cuisine is hummus. It is boiled chickpeas mashed to make the delectable dip. Tahini, olive oil, lemon juice, garlic, and salt are combined with the chickpeas to make it flavorful. The king of Arabic appetizers is hummus, which is an Arabic word that signifies chickpeas. Behind the slightly nutty flavour of the chickpeas, the best hummus harmonizes the flavours of each item. It has a mellow flavour that most people appreciate when made traditionally, with a hint of sour (lemon), salty, and bitter (tahini) to keep it interesting. Hummus is a smooth, satisfying, and healthful alternative. 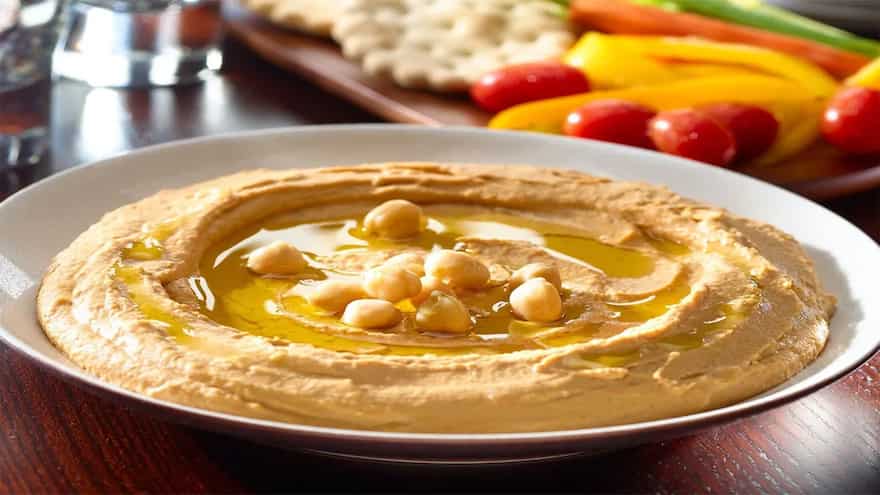 Baba ganoush and hummus are both high in fibre, low in calories, and full of Omega-3 fatty acids. Both provide calcium, iron, magnesium, phosphorus, and zinc, as well as a variety of beneficial minerals. Protein, insoluble fibre, and vitamin B6 are all included in the chickpeas used to make hummus. Due to its rapid reduction in size during cooking, eggplant has a higher nutritional density in terms of vitamins B, E, and riboflavin. Additionally, baba ganoush contains fewer calories.

Both meals are quite healthy, but baba ganoush edges out since it contains more vitamins from the eggplant and has fewer calories.

Hummus With Some Tuscan Chillies Or Palestinian Dakkah

Benefits Of Hummus And Dishes To Pair

Quiz: You’re The Hummus To My Falafel