From chaman to palak, chokh vangun to dum aloo, the spread was brimming with deliciousness. Actor Anupam Kher who is still riding high on the success of his latest film ‘Kashmir Files’ took to Instagram to give us a sneak peek of his lunch with family. The actor sat down for a homely meal at his younger brother Raju Kher’s residence. He was also joined by his mother Dulari. The meal was prepared by Raju Kher’s wife Reema. Reema cooked choicest Kashmiri delicacies, all of which were captured by Anupam in his Instagram stories that he posted on Sunday. Starting with Chaman or the Kashmiri Paneer curry cooked with curd and mild spices, he then pans the camera over to Pulao, which looks a lot like Khichdi, it was placed adjacent to the Kashmiri-style Baigan or Chokh vangun, where aubergines are cooked in a tomato-based gravy. Next to the baingan was a bowl of Mutton Rogan josh, flanked by Palak (spinach) ki sabzi, followed by Dum Aloo, a fiery Kashmiri potato curry made with potatoes, tomatoes and spices.

After thanking the hostess, Kher pointed towards the ‘Dum Aloo’ and said, “Ye mera favourite (this is my favourite)”, then pointing in the direction of Palak he says, “ye mera second favourite”, and then bringing the phone camera closer to the Paneer he goes, “aur ye mera third favourite. 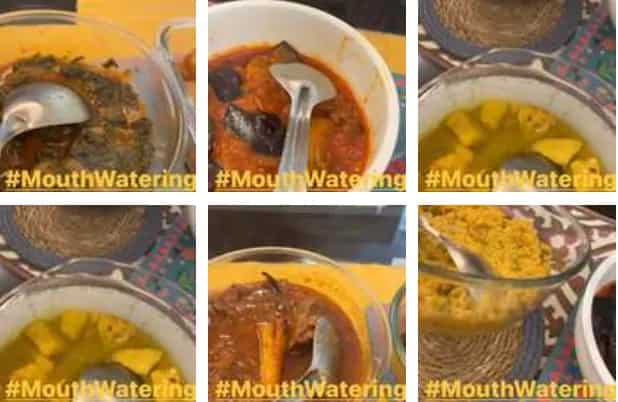 Anupam Kher’s ‘Kashmir files’ has collected more than 200 crores at the box office, making it the biggest box office hit of this year. Anupam Kher, who himself is a Kashmiri Pandit, seemed to look very excited by the spread.

How To Make Kashmiri Dum Aloo

Dum aloo is a dish that is prepared in a myriad ways across the country. For instance, the Bengali Dum aloo, which is much different from the Kashmiri Dum Aloo, as it uses baby potatoes and is bursting with panch-phoron, the Bengali spice blend made with 5 spices. The Kashmiri Dum aloo typically uses potatoes or larger size, you can use medium/small-sized potatoes as well. It uses a pinch of sugar or fennel seeds (or saunf) which makes the dish quite fragrant. The use of curd or yoghurt, gives a tangy touch to the dish which could get very spicy given the number of spices used.

Kashmiri Dum Aloo, as you may have guessed also uses Kashmiri red chilli powder, which makes it extra red and vibrant in appearance. Here’s the step-by-step recipe of Kashmiri Dum Aloo. Try it soon and let us know you liked it.

Decoding Kashmiri Wazwan: The Flavours Of 36 Dishes On A Plate