The actress, also posted an Instagram story “with the gang eating Khowsey” Kareena Kapoor has her hands full with a slew of interesting projects. She will be starring opposite Aamir Khan in Lal Singh Chaddha, a Hindi Adaptation of ‘Forrest Gump’. She would also be making her OTT debut with Sujoy Ghosh’s murder mystery. Based on the book ‘devotion of Suspect X’, this film also stars actor Jaideep Ahlawat and Vijay Varma in the lead. Kareena is currently shooting for the same in Kalimpong, a hilly town in the Himalayan foothills of West Bengal, and looks like the food buff in her has found the best eateries of the town already. A few days back, the actress spoke abut how she traveled the world only to find the world only to find ‘the best Tiramisu’ in the heart of Kalimpong. On Sunday, the actress had the ‘best meal ever’ courtesy Neena’s Kitchen, a famous Kalimpong-based cloud kitchen. The actress gave a special shout-out to their Khowsey. The actress, also posted an Instagram story “with the gang eating Khowsey”. She was joined by her make-up artist and crew for this intimate dinner.

Coming back to the Khowsey, the Burmese dish sure looked like a delight on Kareena’s Instagram story. The close-up shot gave us a glimpse of thick noodles all tossed up in creamy, coconut-milk based sauce. Adding the crunch, heat and drama to the noodles were chopped boiled eggs, chicken, crushed peanuts, chives, chillies, and greens. 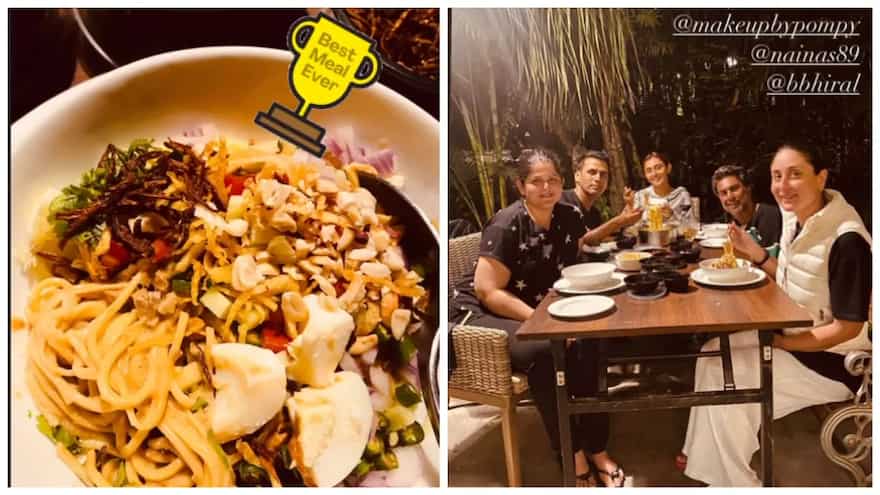 What Is Khow Sey?

If you are even remotely aware of Burmese cuisine, you would perhaps have heard about the Khow Sey, also known as Khow Suey. It is a noodle soup, but of course, there’s dry version of the delicacy too. It is made of thick egg noodles, curried beef, chicken and coconut milk. A variety of contrasting condiments such as chopped peanuts, chilli flakes, sprouts, green onions, chillies, burnt garlic chips et al. It is finished off with a squeeze of lemon, that brings about a tangy twist to the dish that can become rather heavy and creamy courtesy the coconut milk.

The coconut milk is a very intrinsic part of Khow suey. The dish itself, is said to be an off shoot of the Burmese noodle dish ohn no khauk swe, literally 'coconut milk noodles'. This noodle dish apparently came to East India with Indians who had to migrate from Burma during World War 2.

Even the Memon community of Pakistan adapted the noodle dish, which again, may have something to do with thee massive influx of South Asians from Burma in the 1960s. In the Memoni kitchens, it was further developed and served with new condiments and came to be known as Khausa.

Slurping much? Here’s a delicious recipe of Khow Suey, you can try soon.