Heroes who rose up from among us, to fight for us. They looked like us and even ate like us. It is a momentous year for India, as we gear ourselves for the 75th anniversary of India’s independence from British rule. India was a British colony for close to 200 years and it took several rebellions, big and small, to win our freedom from the British government. This period is also marked by glorious tales of bravery shown by our freedom fighters, many who voluntarily gave up a life of comfort to fight for the nation’s independence, even if that entailed multiple rounds of jail, lathi charges, police brutality and life sentence.

These were heroes, whom we owe our freedom to. Heroes who rose up from among us, to fight for us. They looked like us and even ate like us. Some also famously used food as a tool to further the freedom struggle. Remember the Salt March and Hunger Strikes? Dingy food joints also became hubs to dissent.  Here’s a round-up of five of our national heroes, what they liked to eat, how they liked it and more.

The 2021 Vicky Kaushal-starrer Sardar Udham traced the 20-year-old struggle of one man, who, until the previous year was only known as the one who took revenge for the Jallianwala Bagh Massacre in 1919. The unfortunate event became a turning point in India’s freedom struggle. More than 1,500 innocent lives were lost in the firing ordered by General Dyer in Amritsar.

Udham Singh was one of the volunteers trying to control damage by carrying maimed bodies to camps and shelters amid a night-long curfew. He swore to find Michael O’ Dwyer, the Lieutenant Governor of Punjab, British India, between 1913 and 1919, Dyer worked directly for him. Udham decided to shoot him dead to register his protest and this took him various aliases and travels. There’s a scene in the film set in London, where he doesn’t quite resonate with the pacifist, subdued ideologies of the group on the table. Without creating any furor, he quietly asks for a ‘ladoo’ from the tray lying in front and munches on.

Udham was an orphan, and chose to have no family later on either as he was committed to his cause. There is very little known about his life, because he chose a simple life devoid of pleasures. A tiny laddoo, however, would always manage to bring him joy. Later on in the film, he is given a life sentence and days before his execution, his interrogating officer brings him a dabba-full of laddoos, which becomes his final treat. After the film’s success, Vicky also shared a heart-filled note for the hero, with a line that read, “cherishing all the love pouring in, Udham Singh style. I guess we both share the same love for laddoos.” There is no denying that Mahatma Gandhi was one of the most pivotal figures of the Indian freedom struggle. Just like his approach, his diet was also very ‘Swadeshi’. The lawyer turned politician was a vegetarian, who wrote many books during his life, few which also captured his love for plant-based meals, like ‘Diet and Diet Reforms’, ‘The Moral Basis of Vegetarianism’ and the ‘Key to Health’. Mahatma Gandhi was a vegetarian by choice, Source: Gandhi.gov.in

He kept many fasts; some for the freedom causes of course that would run for days and months, some for himself. When he ate, he preferred a simple, Satvik meal. He said, “Man was not born a carnivorous animal, but born to live on fruits and herbs that the earth grows.” His favourite snack was made of plantains and ground nut paste, his staple lunch fare would feature lots of local grains, dals and vegetables. He would drink goat’s milk and encourage his followers to avoid sugar.

Did you know that the man behind ‘Thaggu Ke Laddoo’ was also a loyal follower of Gandhi. And since he would mix ‘sugar’ in his ladoos to make them taste better than regular jaggery-based ladoos, he was deeply conscious of his ‘cheat trick’, and thus chose to call his ladoos ‘Thaggu’ ke laddoo. Thaggu comes from the word ‘thug’ which means to cheat.

Also Read: A Bit Of ‘Cheating’ Mixed With Mystery; Know The Legend Behind ‘Thaggu Ka Laddoo’

Another academic turned national leader, Netaji Subhash Chandra Bose’s list of contributions towards this nation is immense. He was always in and out of jail, and constantly under the radar of the British. In the year 1936, Netaji was under house arrest at a bungalow in Darjeeling, West Bengal. For six months, he strictly called for an English breakfast filled with loaves of bread and puddings and nothing ‘Indian’. It was later figured that Bose, with the help of the servant, would use the loaves of bread to sneak past confidential information to his friends and fellow freedom fighters outside. He would have the puddings with much delight though. Bose would also known to sit down with his comrades in local snacks shops, where they would strategise their next moves over telebhajas (fritters) and cha. One such pre-independence establishment is Laxmi Narayan Shaw and Sons, founded in 1918, the small eatery would often have Netaji and his friends in attendance. The shop still celebrates Netaji’s birthday every January, by handing out free telebhajas and pakoras all day to customers.

The joy of Independence was eclipsed by the horrors of partition that was witnessed in August 1947. The mass exodus of West Punjabi refugees in Delhi, increased Delhi’s population overnight. One among these refugees was Kundan Lal, the man behind the legendary Tandoori Chicken, Butter Chicken and even Dal Makhani. One of Kundan Lal’s loyal customers was Pandit Jawaharlal Nehru, who was said to be a fan of Moti Mahal’s Tandoori chicken. Most parties at the Prime Minister’s house would be catered by Kundan Lal’s restaurant, which did wonders for Moti Mahal’s popularity in the city of Delhi, which was now Kundan Lal’s new abode. 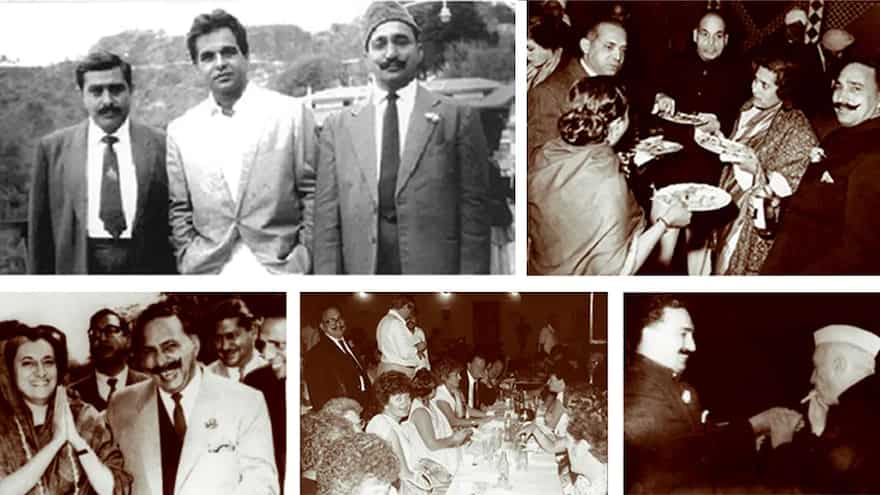 The first nobel laureate of Asia who famously gave up his knighthood to protest against the Jallianwala Bagh, Rabindra Nath Tagore encouraged many people to fight for the nation with his literary works and arts. Despite belonging to an affluent family in Bengal he was committed towards seeing his nation free. He was a man of varied tastes, and enjoyed both his pies and Bhapa Ilish with equal fervour. He would travel the world and ask his cooks in Thakurbari to blend all these local and foreign elements. He was also known to have these phases, where he would eat one kind of vegetable or meat in many different avatars every day.

Also Read: Flavours From The House Of Tagore Or Thakurbari As We Know It

When Tagore turned 50, he was served a dessert that was apparently made especially in his honour. The dessert was named Kabisambardhana, (tr. In honour of the bard). It may pass off as an orange burfi, but you would not be able to guess the secret ingredient that made the barfi so unique and special (it was minced cauliflower).