The sandwich is a worldwide dish with endless options. Nobody (well, maybe someone) will argue that it's a sandwich if it's between two slices of bread or tucked into a roll. People all throughout the world consume things that other cultures might find strange, but when made into a sandwich, it becomes a little bit easier to understand, a little bit easier to accept. The sandwich is the ultimate appetizer.

But we'll be the first to acknowledge that certain sandwiches you've never heard of simply because they're not that tasty. In the United Kingdom, for example, a toast sandwich is simply buttered toast sandwiched between two slices of bread. But there's a whole universe of amazing sandwiches out there that you should definitely be aware of. But be warned: once you learn about them (and especially if you taste them), your life may never be the same.

A chivito, a Uruguayan national dish, begins with fillet mignon and is topped with mozzarella, tomatoes, mayo, olives, bacon, ham, and eggs, as well as possibly other add-ons such as beets, fried red peppers, sliced cucumber, or peas. It's served on crusty bread, and there are several variations, such as the "Canadian chivito" which is cooked with Canadian bacon. A Chicago speciality inspired by Puerto Rican immigrants. Instead of bread, this heavy sammie is created with mashed and fried delicious green plantains, which are then covered with mayonnaise, meat, cheese, and veggies. Although the original jibarito was cooked with beef stuffing, substitutions such as chicken and pork are common. In Malaysia, Brunei, and Singapore, this is a popular breakfast sandwich. It's basically an omelette combined with a french loaf. They're often created with minced beef, sardines, eggs, and chopped onions that are fried in a skillet and then placed in the cavity of a baguette, which is then fried again and split into smaller sections. Belgians take their fries seriously, so it's no surprise that one of their favourite sandwiches includes them. A Mitraillette is constructed with a tiny baguette and fried meat (such as sausage, beef, or steak), topped with salted fries and your choice of sauce (the most common are mayo, ketchup, garlic sauce, and béarnaise sauce). 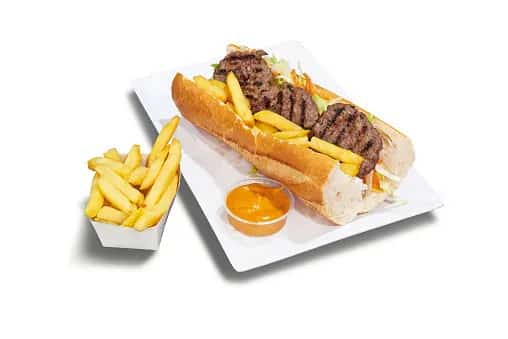 These massive sandwiches originate in Poland, where they are a popular street dish. A halved baguette is used to make a Zapiekanka, which is generally topped with mushrooms, cheese, chopped onions, ham (or other types of meat), and peppers. The sandwiches are then baked until the cheese melts and the baguette crisps. When it's done, slather it with ketchup, mustard, and/or chives.

A Bosna is a spicy Austrian fast food item that looks similar to a hot dog. It's created with bratwurst, onions, and a mixture of mustard, ketchup, and curry powder. All of the ingredients are assembled on a white bread roll and grilled before serving. 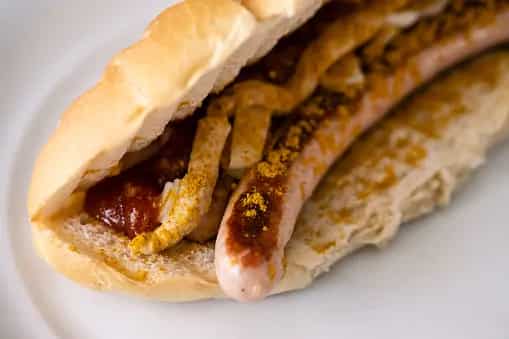