Kenya's culinary fare is filled with delicious and lip-smacking food going back thousands of years. Kenya, a beautiful exotic country in East Africa is surrounded by picturesque scenic beauty. This stunning country is known for its adventurous safari excursions, breathtaking beaches and piquant cuisine. Kenya is a land of diverse culture where different communities reside together, which gives their cuisine a rich variety. Kenyan cuisine has gone through lots of changes throughout the years. According to history, Portuguese arrived on the coast of Kenya in 1496 where they introduced food items from the newly discovered Brazil like maize, bananas, pineapple, chilies, peppers and sweet potatoes which later became the local culinary staples of the country. Later in the beginning of the 19th century they were introduced with the dishes involving curries, which has now become a Sunday regime for almost every household in Kenya. There is no doubt that this amazing country is filled with delicious and lip-smacking food. So, without any delaying, let's look at some of the Kenyan delicacies that you must try, if you are a foodie just like us.

Kuku wa Kupaka is a mouthwatering dish consisting of tender and succulent chicken pieces which are tossed in flavourful spicy sauce made with various herbs and spices like green chillies, cumin, turmeric, coriander etc. To balance the heat of the gravy, coconut milk and tomato paste is also used in the preparation. Kuku kapaka is a widely popular dish along the coastline of Kenya.

Ugali is considered as the emblematic dish of Kenya. It is a quintessential Kenyan staple which is enjoyed by everyone in the country. It's made by adding the maize flour to the boiling water until it becomes a thick-dense paste. Locals eat this dish with their favorite stews or stir-fried vegetables. Did you know? The former President of USA, Barack Obama also has a penchant for this dish of Kenya. 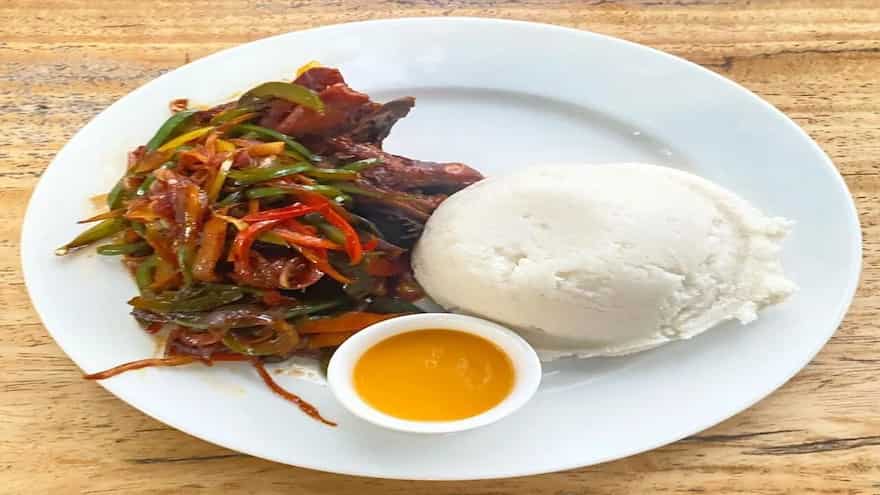 The word ‘Pilau’ sounds similar to the Indian dish ‘Pulao’ and interestingly both of these dishes aren’t much different either, this dish is often cooked during traditional festivals of Kenya. The humble dish is basically made with rice, which is cooked with bursting flavours of meat broth, chicken, or vegetables. The spiciness of the dish makes it a lip-smacking delight Kachumbari is a delicious salad involving finely chopped onions, avocado, chili peppers, and tomatoes. This salad undoubtedly takes the crown for being the most refreshing salad of Kenya. It is often served as a condiment or appetizer. Kachumbari tastes best along with its traditional dishes like ugali, pilau and Tanzania. Mandazi is a Kenyan version of donut, this sweetmeat is often savored as an evening snack. This sweet ball is infused with delicious hints of cardamom and sweet coconut which is then deep fried and coated with icing sugar for the extra sweetness. Mandazi is available in every nook and cranny across the country. Thus, making it a worthy toothsome delight to try. Feel free to let us know if we missed any sumptuous delight from the amazing Kenyan Cuisine.

Why Should You Stop Taking Vitamin C Supplements Immediately?

Eat These 5 Foods Rich In Amino Acids For Good Health

Did You Know About These 4 Tuscan Dishes?

Beat The Heat With This Classic Watermelon-Lemonade

How To Cut Pineapple Like A Pro, Easy Tips You’ll Thank Us For