10 Unique Varieties Of Apple From Around The World

Different in taste, texture and place of origin, these apples are worth knowing about ‘An apple keeps a doctor away’ is not the only reason we love apples. One of the world’s most versatile fruits, apples are also counted among the oldest foods known to humankind. Many cultures - including Norse, Greek and European Christian - consider the fruit auspicious for its religious and mythological significance. The syrupy-tarty flavour makes apples an ideal for choice for baking, cooking or eating raw.

The fruit comes from a deciduous tree, which is believed to have originated in Central Asia thousands of years ago. From Asia, apples eventually travelled to Europe, finally making inroads into America. However, different varieties of apples are now grown around the world on a commercial scale. In fact, there are over 7,500 known cultivars of apples.

Did you know that India’s Kashmir Valley is home to as many as 113 varieties of apple? Out of these, seven are cultivated commercially - namely, Shireen, Firdous, Delicious, Ambri, Treal, Maharaji, Kesaer and Royal Misri. Apart from Jammu and Kashmir, apple is also widely cultivated in Himachal Pradesh, the hilly terrains of Uttar Pradesh, Uttaranchal, Tamil Nadu, Arunachal Pradesh, Assam, Meghalaya, Nagaland and Mizoram.

Globally, certain varieties of apple are quite popular and widely consumed, while there are also types that are fairly distinct and even obscure to a certain extent. These vary in size, shape, taste and texture. We have put together a list of apples that are interesting not only because of their colour and flavour, but also their origin and use. Read on.. It’s an heirloom apple that is believed to have originated in Oxford County, Maine in the US. The history of Black Oxford can be traced back to 1790 when politician Nathaniel Mervin Haskell discovered this antique variety as a seedling. The skin of this medium-sized fruit dons a dark-purplish crimson colour with a rather complex flavour. The apple tastes sweet and is quite versatile. People use it for baking and making cider, while you can also eat it fresh. Often referred to as a ‘cultivar of apple’, Golden Delicious is a mixed breed combining Grimes Golden and Golden Reinette apples. This large, green-yellowish apple is the state fruit of West Virginia, the US. It was first grown in 1832 by a farmer named Thomas Grimes in Wellsburg. This sweet fruit can spruce up your regular fruit salad bowls, and is also widely preferred for apple sauce preparation and making puddings. It is also said to help ward off certain diseases. 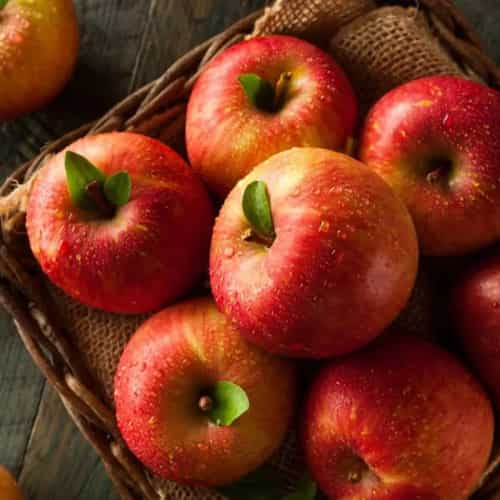 Another cultivar variety, Fuji apple was developed in the 1930s at Japan’s Tohoku Research Station. It combined the traits of the Red Delicious and old Virginia Ralls Janet varieties. In the US, Fuji apples are now cultivated in Washington, Michigan, Pennsylvania, New York and California. Known for its sugary-sweet juicy taste, this variety comes with firm, creamy-white flesh. The acid content of Fujis is low, while skin colour ranges from yellow and green to red. Favoured both for baking and cooking, Fuji apple is also great for making cider. Yes, this apple is pink-fleshed. In 1944, a breeder named Albert Etter first developed this cultivar in California. Pink Pearls are conical-shaped and medium-sized apples. Their skin is yellowish-green in colour and is often translucent, while the taste can be described as crispy, sweet and a bit tarty. Often preferred for making sorbets, preserves and sauces, this apple can instantly jazz up your tarts, pies and scones. It also goes well with savoury items. Popularly known as the Green Apple, Granny Smith is a product of chance seedling that came into being after orchardist Maria Ann Smith propagated the cultivar in 1868 in Australia. It’s a firm fruit boasting a crispy, acidic flavour. Compared with other varieties of apple, Granny Smith can be preserved easily for a long time, and is a favourite ingredient for a number of dishes, including cake, pie, cobbler and crumble.

This rare variety of apple is dark in colour - both the skin and flesh. Ottersons are medium-sized round fruits, the origin of which is not well documented. This red-juiced cultivar apple is usually preferred for making ciders. Said to be high in antioxidants, red apple juice comes with a host of health benefits and hence used as an ingredient for food processing. A popular cultivar in the US, the origin of Red Delicious apples can be traced to 1872 in Madison County, Iowa. As the name suggests, this is your quintessential delicious, red apple. This medium-sized variety comes in conical shape, and is mostly eaten raw. Apart from adding to your fruit bowl, the crisp Red Delicious apple is also seen on sandwiches, quesadillas and sometimes even burgers. The ‘national apple of Canada’, McIntosh was discovered by apple breeder John McIntosh on his Ontario farm in 1811. This all-purpose variety is also a famous dessert apple, the credit for which goes to its crispy, tarty taste. The medium-sized McIntosh sports a red colour with patches of green. Good for baking and juicing, the soft flesh of this variety makes it a preferred choice for cider, sauce and pie. Sweet and aromatic Gala apples first came up in New Zealand in the 1930s. This cultivar was grown by orchardist JH Kidd. Mottled appearance and mild, sweet flavour are among its most common traits. This fruit is mostly eaten fresh or used in the making of salad, sauce and cider. Galas’ firm texture also makes them ideal for pies, cobblers and a variety of other cooked dishes. Yet another cultivar, Honeycrisp was developed at the Minnesota Agricultural Experiment Station's Horticultural Research Center in the US. It flaunts a sweet, berry-like flavour. The fruit’s delicate tangy taste also makes it suitable for cooked preparations. You can use Honeycrisp apples to make cake, pie, salad, salsa, soup, crisps and even dumplings.

5 Reasons Why We Absolutely Adore Apples

Use These Easy Hacks To Store Apples During Winters

4 Ways You Can Use Your Leftover Mushy Apples