This Delicious Massaman Curry Brings India And Malaysia On A Plate

Thai cuisine has been known for its fragrant and creamy curries. If anyone has mastered the art of adding that extra kick to your meal, it is the Thai. Be it the Red and Green Thai curry (which is the most popular around the world) or a spicy Massaman Chicken Curry that we recently discovered. If your ingredient list comprises of any of these; lemon grass, green chilies, basil leaves or kafir lime, you’re definitely on a Thai spree. It is these powerful items that lend the Thai dishes a distinct taste and aroma. We think it’s time to move over the red and green and unveil the magic of Thai flavours in our kitchen.

Massaman chicken curry is a new addition to our list of Thai curries that we absolutely adore. What makes this dish stand out is the sweetness of the curry. Though hot chilies are a part of the recipe, yet they do not overpower the other rest of the spices. A staple in the southern parts of Thailand, the Massaman curry has several tales bubbling. 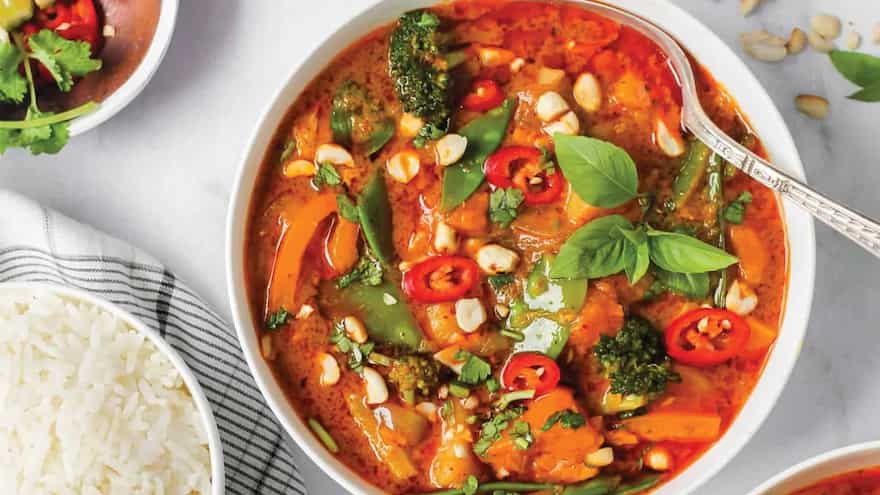 The most commonly held notion is that it is a fusion of Indian and Malay flavours where cumin, nutmeg, cloves and other dry spices owe it to the former and the coconut milk, which is the base of the curry, is a Thai addition. What makes it interesting is the use of palm sugar, peanuts and even potatoes. As for the origins, it is believed that Persian merchants brought the curry with them in the 17th century which was later popularized by the family kitchen of the noble family of Bunnag in Thailand.

To validate these tales, etymologically too Massaman or Matsaman is a derivation of Mussalman (referring to the Muslim population) who reside in the southern region of the country. Moreover, this makes even more sense when you connect it with the fact that chicken and beef were the usual proteins added to the curry. Pork was relatively an untouched ground, which was later adapted by the Western countries. The historical journey of this curry finally turned a corner and reached us.

Is It Just Us, Or Is this Grilled Hawaiian Chicken Turning Heads, Quite Literally