Turkish Coffee: Have You Tried This Popular, Ancient Style Of Brewing Coffee

The robust flavours of the Turkish coffee comes from the special brewing technique. A nice cup of coffee is all we need early in the morning to kick-start our day. Everyone is familiar with cappuccino, latte, mocha, Americano et al. But have you tried the Turkish coffee? This coffee is packed with robust flavours because of its brewing technique which is quite different from the process of making our conventional types of coffee. Its special technique also grabbed the attention of UNESCO. The UN body included it in the list of Intangible Cultural Heritage of Humanity, and since the year 2013, December 5 is celebrated ‘World Turkish Coffee Day'. What Is Turkish Coffee

Turkish coffee is traditionally known as Kahwa (meaning ‘strength’ in Arabic) is an intangible part of the Turkish culture which came into existence around 1500’s when coffee was mainly served to sultans as a sign of royalty. It was a luxury which only a fewer people could get hold of, as per the popular beliefs. Due to the rise of popularity of the coffee among upper classes, they even began to appoint special coffee makers known as kahveci usta to prepare the best coffee. A traditional Turkish coffee is prepared using a special brewing pot known as cezve which is a small brass vessel with a long handle, and beautiful engravings on its body. This small pot is filled with water and fine coffee grounds, (preferred option being roasted Arabica beans) which is then held over a heat source to initiate the brewing. A perfect Turkish coffee is believed to have a thick froth on top, and the more the froth, the better the aromatic flavour.

Another fascinating bit associated with Turkish coffee is Turkish coffee reading. Tasseography (or tasseomancy) is an art of fortune-telling that takes place once the person finishes his/her coffee. The coffee sediments left behind in the cup are used to interpret future .

You can also try this luxurious cup of coffee at home. So, without any further ado here’s the recipe. 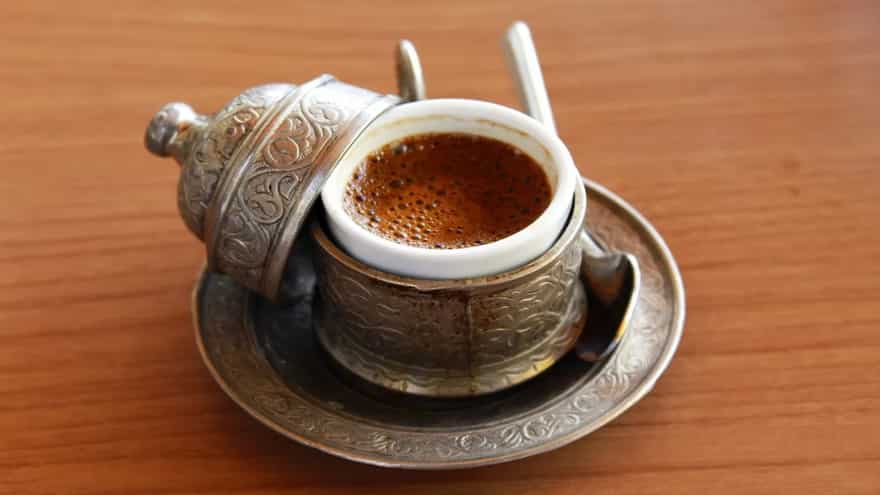 1. Pour the water into the cezve. Add the coffee grounds and sugar. Mix them well. Do not stir it afterwards.

2. Put the cezve on the stove over medium heat. When the foam begins to rise up, skim off the foam by transferring some of the foam into the coffee cup. Return the cezve back to the stove and let it heat again.

3. When the foam began to rise again. Turn off the flame and pour the coffee slowly into the coffee cups so the foam rises to the top.

You can skip the sugar entirely to enjoy the authentic flavours of the coffee.

Slurrp O’ Clock: 5 Delicious Ways To Use Coffee This Summer