If you’re in North India, especially in the capital, you’ll find an equal (or even more) number of momos vendors as the golgappa wala thelas. That’s how much people love momos, or wait, do we call them dimsums? A debate that has rigged many a friendships, broken hearts and led to huge catastrophes (apologies, momos make us dramatic) is whether momos and dimsums are one and the same thing. Since the time momos were introduced to this side of the world, there has been no looking back. Every nook and cranny of the country boasts of a range of shops as well as momo varieties. Tandoori, steamed, fried, pan-fried and we have invented something called Afghani momos too. I doubt Afghans are aware of this.

Coming back to the pressing question, there is something called dimsums too. At first, they might seem very similar to momos and people often refer to them as a fancier upgrade of momos, meant for the elite class. We can’t deny the fact that there is some truth to this. Momos belong to Tibet while China is credited with the invention of dimsums. The former is eaten to fill the stomach as a street food snack while dimsums tend to be on a lighter side, accompanying tea at Chinese households.

Dimsums are a fine-dining affair While momos are found at every street stall, dimsums are generally find place on a fine dining restaurant’s menu, served with a variety of dips and traditionally eaten with chopsticks.

Momos are stuffed with all kinds of things By now, you would have established the fact that momos are our jugaadu desi food. From paneer to chicken and vegetables, you can stuff these tiny pieces of heaven with anything you like. The dimsums are supposed to live up to their classy standards and they aren’t necessarily stuffed. Fun fact: There are about 2000 varieties of dimsums available and your crispy spring rolls qualify as one too. Unbelievable, right?

Dimsums are very versatile when it comes to the flour The standard flour for momos would be either maida (all-purpose flour) or wheat. Dimsums are limited to those, they could be wrapped as a potato, rice or any other starch dough.

So where’s the dip? 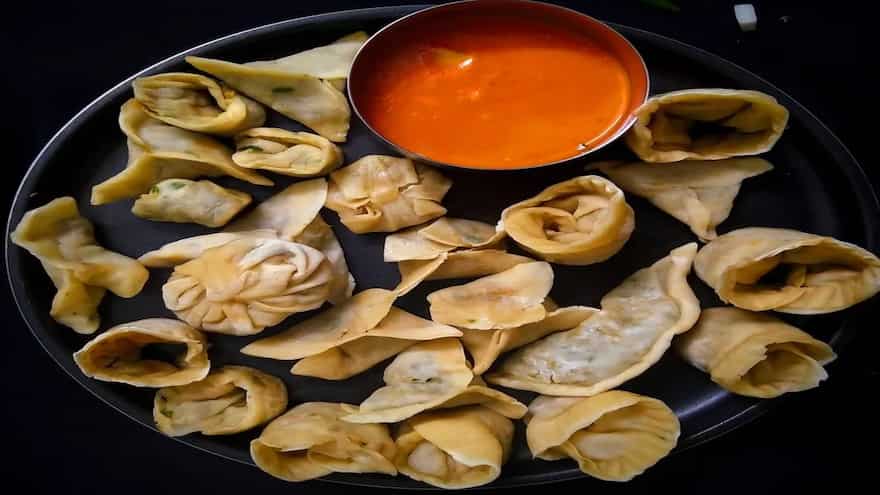 Needless to say, the momos wali red chutney is more famous than the momos themselves. Dimsums are generally served with a chilli oil or a light yellow dip and isn’t a hot affair.

Next time someone says Dimsums are just expensive momos, ask them if they’ve tried Potstickers, Chicken feet and more.

5 Sumptuous Dumplings From Around The World You Must Not Miss