This biryani from East India comes withthe addition of potatoes and eggs, tried it yet? It is not easy to find a Bengali gathering without at least one or two non-vegetarian dishes. Bengali cuisine is renowned for its extensive variety of fish and meat delicacies that are not only popular locally, but have admirers around the country and even abroad. The careful use of spices, the layers, the technique- there's enough to explore in the great Bengali cuisine that is itself a mishmash of many native and foreign influences. One of the most fascinating dishes for us, has to be, the Kolkata Biryani.

Kolkata Biryani is said to be a Bengali spin of the great Lucknawi Biryani. The legend goes, when Nawab Wajid Ali was exiled from his court in Awadh, he travelled eastwards, but with him were some of his trusted Khansamas who brought with them their own treasure of recipes.

The Link Between Awadhi And Kolkata Biryani

Over the years, the Kolkata biryani was developed as a refined sub-variant for the Lucknawi biryani, which explains the fine placement of spices that are never too overwhelming, preference of long-grain basmati rice, the aromatic appeal and the intricate balance of elements. But... it still doesn’t explain the inclusion of potatoes and boiled eggs. 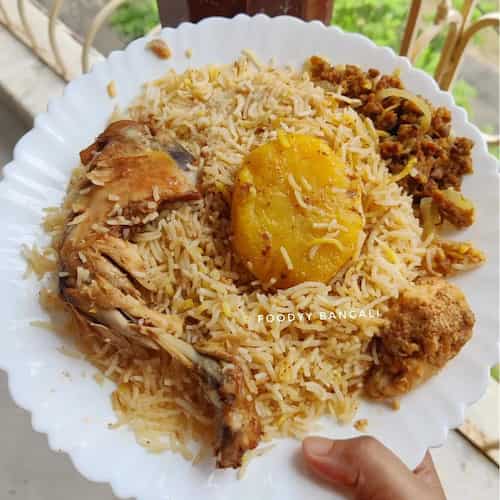 Why were potatoes included in Kolkata Biryani?

There are many theories associated to this novel idea. Some say, that due to budget constraints, the cooks were forced to cut corners on meat and use more potatoes in biryani to bulk up this meaty delicacy. Some historians refute this theory, stating that it was a way to keep up with the rising obsession with potatoes. The tuber was brought to India via the Portuguese and in less than a century it became quite a piece de resistance. Therefore, contrary to popular belief, boiled potatoes weren’t just used to bulk up biryani, but to enhance and embellish it. Similarly, along the way, a hard-boiled egg also found its way into the unique delicacy.

If you go to Kolkata, do not forget to have your share of this legendary delicacy from legendary places like Arsalan or Aminia. If you cannot visit the City of Joy soon, then fret not, here's a recipe that will surely make you happy.