Here is everything you want to understand about Korean history.

Story Of Korean Cuisine: Korean cuisine has been affected by its geographical climate and proximity to China and Japan. European traders also impacted the cooking with their Portuguese introduction of chilli peppers to Korean in the 17th century. By the 18th century, chilli peppers were widely used to prepare Korean cuisine. In the 1980s, the South Korean culture or K- Culture became a significant exporter of K dramas and pop, spreading like wildfire across the Southeast, East, and South Asia. Although, Korean food refers to the traditional preparation techniques of Korea. They have a unique cooking style divided into royal court cuisine to regional specialities and modern fusion food. Due to their preps, many dishes have been popular internationally.

It's very riveting how a culture or cuisine can influence your young minds. Korean culture seems like the subsequent significant influence on culture throughout India and the rest of the world. Korean food's popularity is due to their K- Dramas and K- Pop's culture. The surge went high in the lockdown phase, and home isolation accelerated the advocacy and acceptance of Korean culture in India. Thus, they develop the time, interest, and opportunity to seek a deep dive through their shows and food. According to a report, the viewership of Korean shows, dramas, and pops on OTT platforms jumped to 370% in the year 2020, and the import of Korean noodles in India also witnessed a volume growth of 200% in 2021. The K-dramas inspire veg or non-vegetarian items of their loved delicacies among the youth. With all these ways to eat Korean food, Indian restaurants also gave people a chance to try their traditional food items. 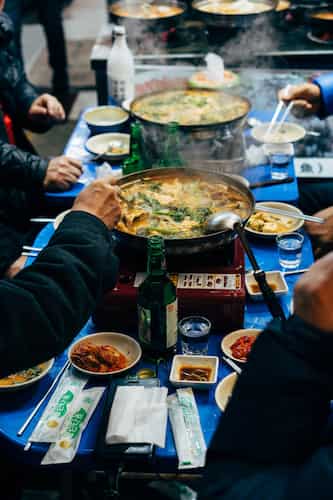 Koreans eat food from rice or soup bowls while they share side dishes (banchan) with others. The table bowl must only stay on it, and people use long-handled shallow spoons (Sutgarak) and silver stainless steel chopsticks (jeotgarak) to serve or eat.

Most Korean dishes consist of simple dishes, but they have intense, pungent flavours or odours. In addition, various Korean side dishes rely on fermentation for preservation and flavour, resulting in a taste of tanginess.

Bulgogi: It is made with thinly sliced or shredded beef, marinated in soy sauce, sesame oil, garlic, black pepper and cooked on a grill. Bulgogi in Korean means “fire meat”; the variants include pork, chicken, or squid.

Bibimbap: A rice dish topped up with chopped vegetables, meat (chicken, pork, beef), eggs and served with a dollop of spicy chilli paste.

Kimchi: A fermented pickle usually made from shredded cabbage, white reddish, or cucumber on brine of ginger, garlic, green onion, and chilli pepper. This is a side dish paired with soups or rice.