How Delhi's Golgappe Are Different From Maharashtra's Pani Puris?

Golgappas are not of one type. There are multiple varieties of this street food. Almost every region has its variety of golgappa that their common people relish. Golgappa, pani puri, pani ke batashe or pani patashi, there are various names of this delicious street food. Said to have originated in North India, today golgappas rule almost all Indian streets. There could be many stalls and restaurants empty in a market, but it's very rare to see a pani puri wala not getting customers. Usually, we don't even get space to stand in front of a gogappa seller's cart and have to wait for long for our turn. All of this inconvenience caused is forgotten once the golgappa fills our mouth and satisfies our tastebuds. This street food indeed has a magic because of which we just can't stop ourselves from asking for more even with our nose running and faces flushed red. Recently, after his historical win at the Olympics, Neeraj Chopra's love for pani puri went viral as he explained how it's the best street food for athletes if consumed occasionally. That's how popular golgappas are.

As mentioned in the beginning, pani puri is known by different names in different places and the recipe varies too. Here, we are going to compare the golgappa version of Delhi and Maharashtra for you.

Delhi is known for its rich street food varieties. Whether it's Chandni Chowk or Lajpat Nagar Market, you'll find mouthwatering golgappe everywhere. The typical Delhi-style golgappas have aloo and spicy and cold green water with boondi floating on it. Many add sweet chutney too. The main two options available at almost all stalls are wheat flour balls and semolina balls. Relish a plate of this delight especially on a summer afternoon and experience what we call heaven. 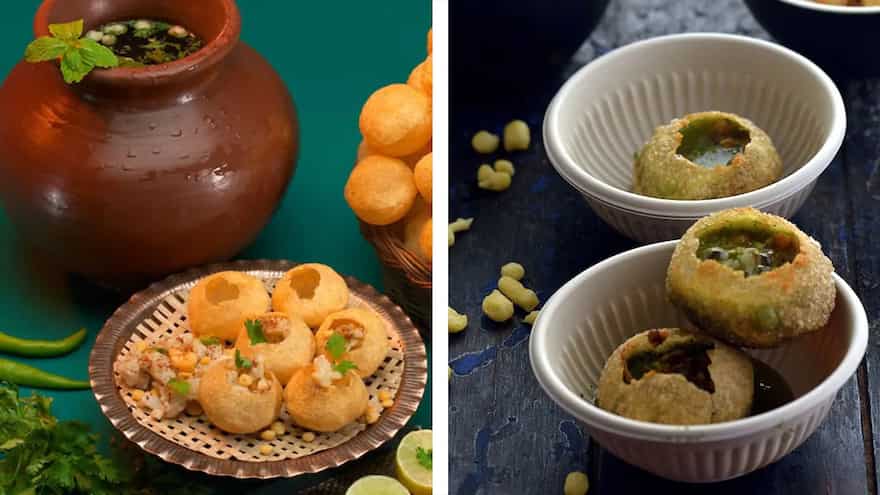 Maharashtra's street food culture is famous just like Delhi. Maharashtra's vada pav and pav bhaji are just scrumptious and you won't find the same taste anywhere else. Another specialty of the region's street food is ragda pani puri. This is exactly opposite to Delhi-style golgappas because these are served hot. Ragda is a gravy dish prepared with white pea, chickpeas, mashed potatoes, and basic spices. This makes all the difference. This is put in the puri when hot along with other garnishing ingredients. While Delhi's recipe is a delight for summer, you can indulge in the hot ragda pani puri of Maharashtra throughout winters.

There's actually no particular season for having a plate of pani puri. This street food has our heart and one should have a goal of trying all its varieties on their bucket list.

Why pani-puri is a marvel of deep-frying