Nepali cuisine includes a wide variety of traditional regional dishes. If you are curious about Nepalese food to eat, then you have landed at the right place! Nepalese cuisine has been influenced by its neighboring country including India, Tibet, and China. Therefore, it has much similar food that India has in its definitive list. The usual dishes involved are soups, lean curries, vegetables, salads, pickles, and curd. Nepal is famous for trekking or adventure destinations, but it is also known for its varieties of lip-smacking delicious food. The base of the traditional Nepali meal is cooked, which is accompanied by flavourful savory dishes. You must try these conventional Nepalese dishes and add them to your bucket list. Bara is pancakes made up of a thick paste of spices, ginger, and lentil. Bara is also spelt as bada, which is a thick savory rice flour pancake. The consistency is soft and fluffy from the inside and crispy on the outside. This is served plain, but there they have many variants involving eggs and minced meat in it. 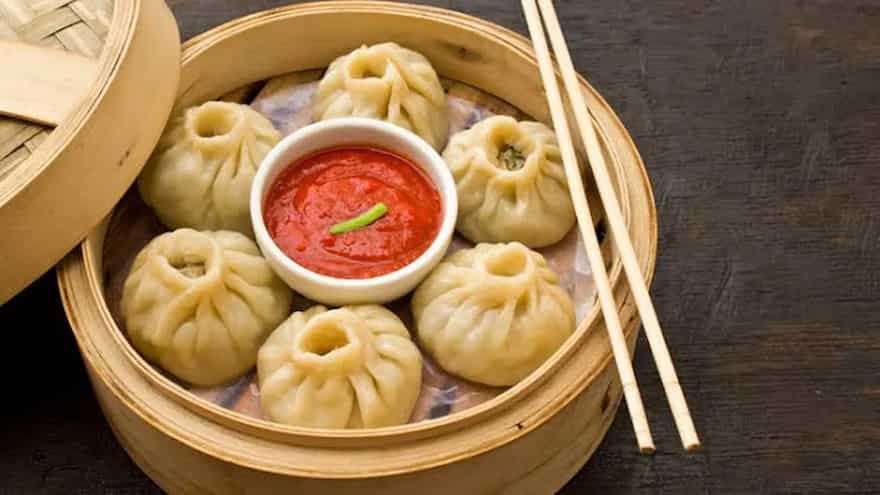 Nepali dumplings or momos are stuffed with vegetables, minced meat, and spices. It is commonly served with hot spicy sauces or mayonnaise. The Nepali momos are a must-try for everyone visiting Nepal. Nepali momos are usually better than Tibetan dumplings. Rice paper sheet is used as momos cover, and it's a typical snack to eat. A Nepali doughnut, sel roti, is a fusion of doughnuts and bagels. Sel roti is one of the snacks served during Nepali festivals like Tihar and Dashain. It is a circular rice flour bread that is deep-fried and crunchy on the outside, and soft from the inside. Chatamari is a Newari snack that is very popular in Kathmandu. It is also called ‘Nepali Pizza’ because of its round shape. Chatamari is a rice-flour crepe cooked with savoury toppings such as chopped onions, coriander, minced meat, eggs, chilies, and various spices. Yomari, the name of this dish, is derived from the words “ya”, which means “Like”, and “Mari”, which means “delicacy”. This treat is to end the rice harvest and make sweet yomari from it. It's a lovely dish prepared from rice dough and stuffed with a sweet paste made up of coconut, sesame seeds, and molasses. Yomari is celebrated each year in the winter to thank the Gods for a good harvest. It's a staple dish from traditional Nepali cuisine. A bhat has rice and lentil curry, accompanied by various seasonal vegetables, meat curry, and spinach, potato, mushroom, chicken, etc., on the plate.