Love Cocktails?Try These 3 Ways To Garnish Your Drink

Instead of seeing the garnish float on top of the drink, bartenders now literally hang them out to dry, using a clothespin. A drink should not only taste delicious but have the big wow factor to it. Present a drink in a way so that a guest naturally wants what you have concocted. Garnishes are no longer just an afterthought at bars. They are as much a part of the drinking experience, as the ingredients which go into the creation of a cocktail. For bartenders, creating the first impression demands creativity. But we were happy to list 3 ideas for you below so that you can also create photogenic cocktails at home. You might find a curly wurly orange peel which is tucked rather skillfully on the rim of the glass. This way of serving up a cocktail quickly grabs eyeballs at the bar. If you want to give a flaming orange twist to your own orange peel, just light a matchstick and hold it an inch away from the orange peel. Then slowly bring it closer to the peel. This will kickstart the citrusy aromas which are released from the skin of the peel. They can be smelled when you sip on your cocktail. 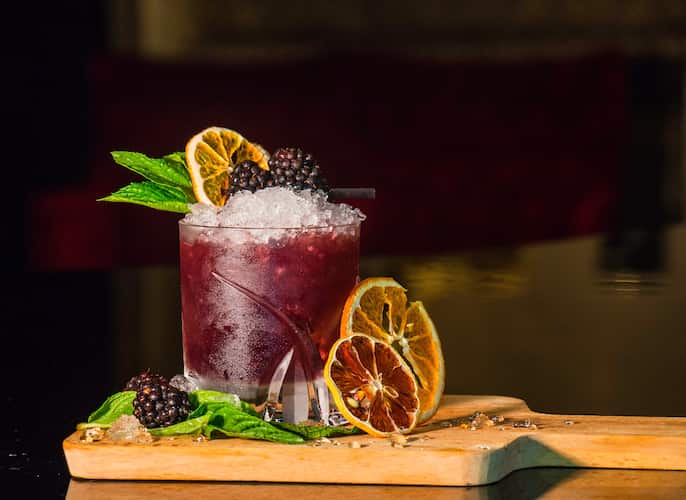 If you are not a fan of any minimalist ideas, then you’d surely want to check out something on the other end of the spectrum: this garnish inspiration is a big blend of leaves, flowers and fruit slices. It sounds like a simple idea, but together, they would totally add elegance to your drink. Besides, you literally feel as though you’re looking at a beautiful flower pot. This one is simply adorable. Instead of seeing the garnish float on top of the drink, bartenders now literally hang them out to dry, using a clothespin. From mint julep to Thai basil,  dried seaweed to lemon peel, this intriguing garnishing style has got to be around longer so that garnishes never have to drown again.

Trivia: The Moscow Mule Was A Boozy Pub Experiment